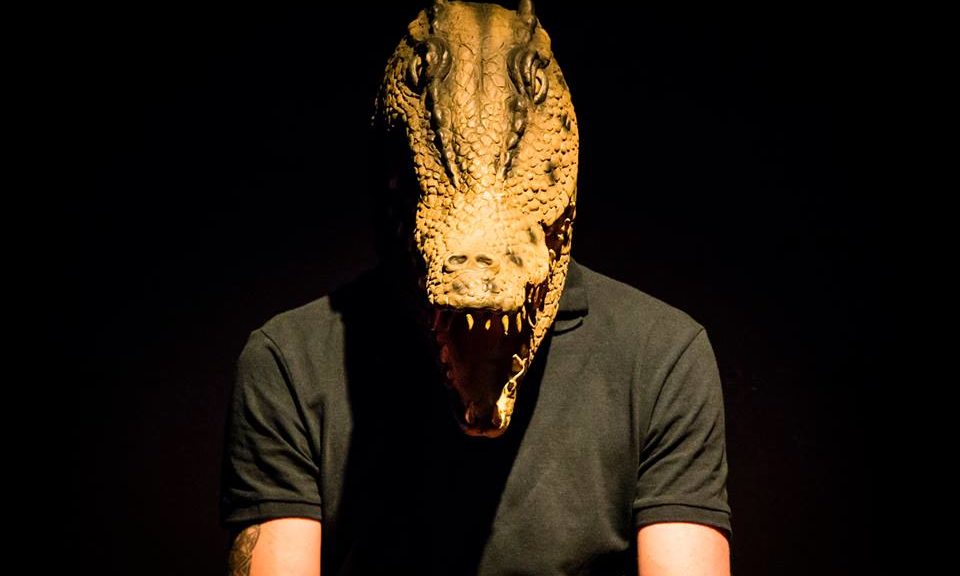 Please find below a transcript of the BSL review of (F.E.A.R.) performed by Gareth Clark at Chapter Arts Centre.

Hello my name is Steph. I’m a member of Get The Chance and I am now going to review a performance called (F.E.A.R.) This was performed by an actor called Gareth Clark, focusing on his fears, in society and the differences in this growing up from child to adult.

I arrived at Chapter Arts Centre where the performance was happening. I had been here before so knew what it was like and where I was going so it felt quite relaxed. I went to the desk and asked to pick up my ticket; there was a bit of a communication break down because the lady did not understand me but I wrote it down and it was all okay.

I then went to find the performance space. It looked interesting with big red letters at the back spelling out the word fear. There was a man sat next to this in a crocodile mask, looked good and a bit scary! 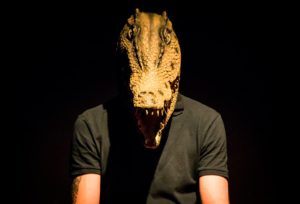 I noticed from the start that Alastair,Sill who was audio describing the piece was sat in the audience a couple of seats across from me. I know from previous performances the AD has been hidden in a box behind the scenes and the blind or VIP audience members can access this though headsets. I appreciated that the audio describing was not hidden away and that (apart from the Deaf obviously!) all the audience had access to this. 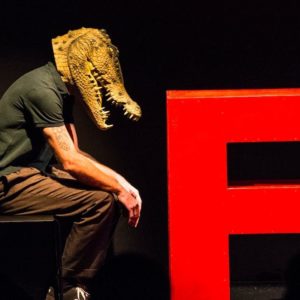 At the start of the piece Tony Evans who was the BSL interpreter let us know he would be moving. I have been to many performances before where the interpreter is placed to the side of the stage and you have to look back and forth in order to access this. I thought this will be interesting to see how this works. It was really clear. And really easy to follow. It was clear it had been well planned and thought out. There was even a moment where Tony put his hand over Gareth’s mouth and it was nice to see this interaction between the character and the interpreter. This relationship worked really well and benefitted the performance. I felt more part and more included in the performance because of this. 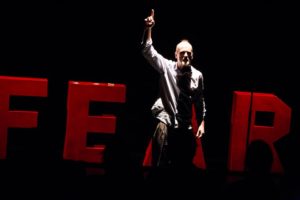 The match between the interpreter and performer also worked really well. The age was similar, look was similar and the portrayal of emotion matched up much better. Because they grew up around the same time this similar experience they had added to the performance. If for example it had been a young woman interpreter the story would have come across much differently.

Seeing both the actor and interpreter on stage also highlighted that (F.E.A.R.) although experienced differently for each person, is the same as a concept overall. Added a sense of uniting it for all.

At the start, I found I didn’t believe the character portrayal of a child as much as I did the different ages shown throughout the rest of the performance. I am not sure why but it was perhaps because I couldn’t emphasise with the facial expressions or they seemed a little fake in reaction to the fear with the over put on smile.. Having said this from teenage upwards I felt like I could well and truly emphasise with this character. It was like there was this barrier that was destroyed in front of us. There was a sudden onslaught of his experiences and an honest, open dialogue that could make him seem vulnerable to the audience. He said that society told him that it was bad to have sex because he will get a person pregnant at 16 and life will be ruined. And then he asked; what do I do then about this aching in his balls with the natural urge to have sex. That felt so honest and open. And being told that by society is something that I was told too. From there I trusted him so much more because it felt like there were no secrets in that room. The fear was exposed. 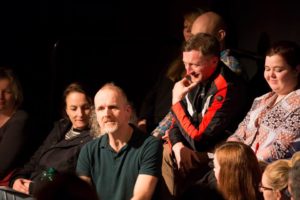 After the performance I talked to the Interpreter and audio describer about the performance and they mentioned how access had not been an afterthought. It had been planned and budgeted into the performance. This is really rare. A lot of the time they are brought in last minute and told GO! But it was so clear that access had been thought about and it so much more a better performance because of this.

One thought to improve is that it was unclear at the start as to why the scene remained exactly the same with nobody moving for about two minutes. I understood afterwards from asking that this was due to allow time for the AD to set the scene. It would have been good to let the Deaf audience know beforehand that this would happen so it is not so confusing when nothing is happening for a while. I feel there could have also been more audience interaction, I know there was some but a bit more to encourage the audience to think more about their own fears perhaps.

To conclude. I really enjoyed the performance and really appreciate how much the access was thought about. I felt I could connect so much more to the piece because of this.

Thanks you for watching.