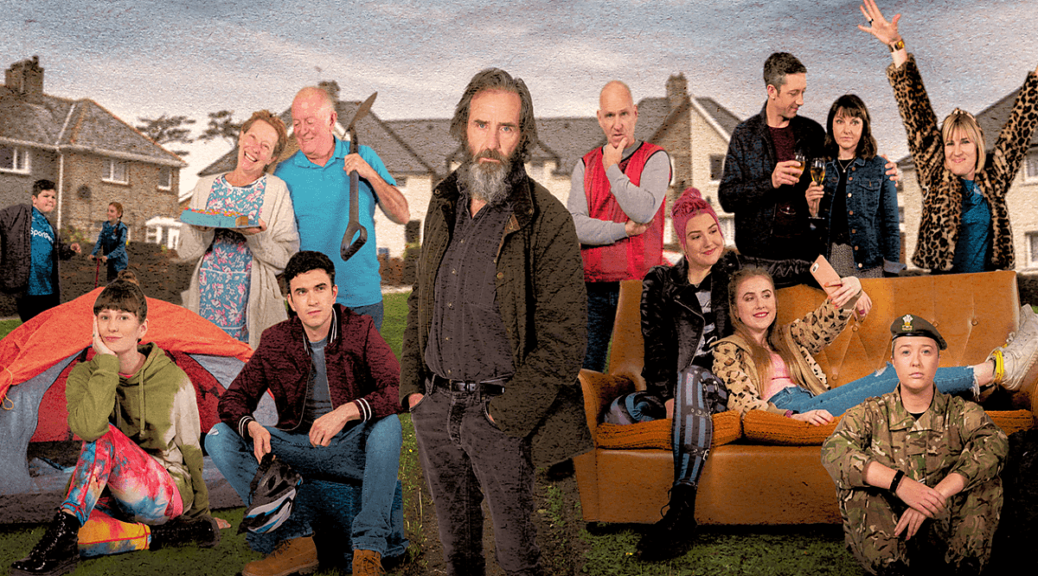 It is the North West that seems to be in the Welsh TV spotlight recently. The final series of Hidden has begun, Rybish has returned, and a brand-new series called Stad has just completed its run.  Set on a council estate near Caernarfon, it combines the drama and comedy of the aforementioned to create a slightly off-piste narrative similar to Enid a Lucy. This has made it lightly entertaining and surprisingly engrossing; a series that does not make you want to binge from the off but, by the time it reaches its final episode, leaves you desperate for more.

Stad is not strictly original, coming ten years after its highly-popular predecessor Tipyn o Stad ended on S4C. Viewers of that series will recognise the return of a few familiar characters, not least the Gurkha family. However, no prior knowledge is needed to enter this new chapter in the life of Maes Menai, described as “North Wales’ most colourful housing estate”. The opening scene might feel a bit overwhelming and thus confusing for those, like me, entering this world for the first time. But it does not take long to adjust to its tragi-comic genre and realise that the historic connections between some of these characters are no barrier to its accessibility. Instead, one becomes steadily intrigued by the issues, situations and circumstances that arise within the first episode and as the series progresses. Mental health is but one subject which is tackled with a surprising sensitivity, particularly in respect of trauma and loss. Elen Gwynne, for example, gives the most acute performance as Susan whose struggle with bereavement is portrayed onscreen in such a way as to be funny without being derisive.

The writers Manon Wyn Jones, Angharad Elen and Daf Palfrey have pitched the darkness and light of this drama to perfection. There is a bit of a Breaking Bad influence that seems to hang over it in more ways than one. There is the obvious connection to the selling of drugs for financial security, but it is also the hapless nature of the partnership between Ed Lovell (Bryn Fôn) and Dan (Sion Eifion) that strikes chords with the father-son relationship of Walter White and Jesse. The two also find themselves in sometimes absurd situations, like being held hostage by a crossbow-wielding farmer by the name of Iona Kebab (Janet Aethwy). Such wild, crazy scenarios end up contrasting nicely with the far more real-world dilemmas of other characters, like Alaw. Begw Rowlands ensures a real likability towards her character, playing her with a confidence that is tinged with a deeper, hidden vulnerability. It draws much sympathy when she discovers that she is pregnant, and makes her gently blossoming relationship with Kim (Gwenno Fôn) all-the-more sweeter.

Stad can feel a bit pedestrian at times, measured and paced, with no rush to excite or entice viewers into a suspenseful or twisting narrative. It prefers to operate at the most basic level of human drama even as some of its storylines take on a surrealist edge. This means that we get to know the characters themselves in the context of their ordinary lives and is what makes the final part of the series so unexpected and heightens the tension around it. We come to really care as Alaw attacks her dad Keith (Rhodri Meilir), with seemingly-terminal ramifications, and Ed Lovell finds himself trapped in the basement of a burning house. It ratchets up the anticipation before running into the closing credits to devasting effect. Suddenly, it is edge-of-your-seat stuff. A second series is demanded.

Stad becomes a series that gradually wins your heart and then has the power to break it.