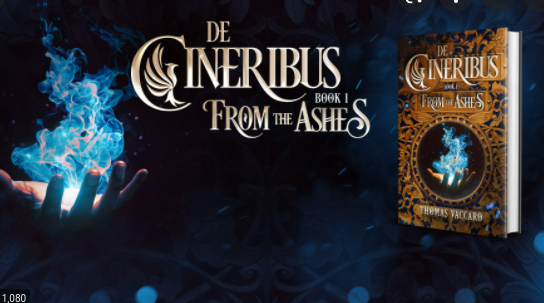 Thomas Vaccaro’s De Cineribus: From the Ashes was a book I honestly wasn’t sure I’d like. I like Thomas’s YouTube videos a lot (their channel name being Unicorn of War), as I am certainly a sucker for a good video essay to absorb over a plate of food (my favourites being their RWBY reviews and rewrites, and their Taylor Swift song discussions), but I’d realised with YouTuber books they were often – well, bad. Or at least, would quickly fade from the limelight or fall from grace in a record speed. I was worried, at first, that this book would be similar; a money grab, rather than a labour of love.

I was wrong, and pleasantly so.

One of Thomas Vaccaro’s strengths, I think, is their ability to think far ahead with their plots. Admittedly, I found their channel because I was actively looking for content about RWBY that would prove its awful writing, terrible production, and overall bad reception, and what I found was someone who was lovingly taken the broken, beaten show, and making it into something of their own. RWBY is its own show, yes, but I admired Thomas Vaccaro’s way of reshaping the information we (RWBY’s audience) have, and turning the plot into something both actually palatable and genuinely fun. This was a quality I was sure would shine through in their book, even while I still quietly worried about the production quality of it. Despite that, at the very least, I knew the story was in perfectly capable hands.

De Cineribus mainly follows Felix, a young adult about to enter the college scene, heading off to a college for those with magic powers. He finds friends, enemies, suffers his wins and his definite losses. A few other perspectives are followed throughout the story but this, I realised, does not take from Felix’s perspective as sometimes multiple POV stories can do. Rather I found the jumps in perspective enlightening, and definitely enriching of the wider plot as new characters would pose new questions to me (what’s happening here? How does it relate back and affect Felix? How much do they know? Whose side are they on?).

As I said, I admire Vaccaro’s dedication to writing and storytelling. It’s most definitely a skill of theirs, and clearly shows through the books. First of all, the book is just over 500 pages long, so you can tell that’s dedication to a story for one! But mainly it comes in the depth and complexity of their characters (and there’s a good number of them!) but while the cast of characters is big, it is not overwhelming. There are not so many that I can’t keep track, or I can’t remember whose skill is what, or who matters to who. This is something I was incredibly relieved to find out as often college/magical fantasy stories often have casts as far as the eye can see. This is something RWBY is completely guilty of, and I found myself noticing Vaccaro’s particular points about RWBY being contested in their own work. Characters in De Cineribus are fleshed out, have their own skills and limits, motivations, and broad personalities. I liked being able to not expect what a character would be like based on their skills. Healers who aren’t friendly, teachers who are cranky, teachers who are jovial, etc. I liked, especially, that while Felix was for the most part sweet and caring and loyal, he also had a very clear dark underbelly to his character; one that was angry, determined to the point of obsessive, and sometimes a bit scary. It was nice to see a main character with real faults, and real regrets when those faults caught a hold of him too strongly.

The writing is strong and done with precision (although I’ll admit I found a few typos – but to err is human. And even so, I can’t even remember where they were or what they were!), Vaccaro’s skill and dedication really shine through the way the dialogue is youthful but not cringey, and the way their descriptions are alluring but not droning. The prose itself was enjoyable, turns of phrase appearing that I wouldn’t have expected, I think I was most fond of “bust a gut” to describe laughter, since this isn’t an image I usually come across, and it definitely elevated the youth of the characters and the depth of their emotions.

The book is, as I said, just over 500 pages – so, not a quick read, but a fun, entangling one.I trust Thomas to make a strong series based on their passion and unwavering dedication. Since this is called book one, and I’m excited to see where the rest of the story may go. Especially since the books ends in a very apt spot for a sequel to take over.I admire their dedication to their craft and in particular, to their audience.

I appreciate aspects I’ve otherwise never seen in literature such as their comprehensive list of trigger warnings at the beginning of the book, and good sized chapters – long enough to engage, short enough that I don’t get bored.

I was initially worried about boring fantasy tropes showing their head throughout this text, as most fantasy books fall victim to at least a few. And while I’m sure a few did seep in there, I was pleasantly surprised when things didn’t turn out that way and I actually couldn’t guess where the story would go as it progressed, which was definitely a breath of fresh air for me.

Overall, the book was a fun, immersive read. Especially for fans of things such as Harry Potter but have outgrown it or do not wish to support its author. It’s a fun, youthful take on the “wizard school” idea, one ripe for a new generation and a new presence in literature.