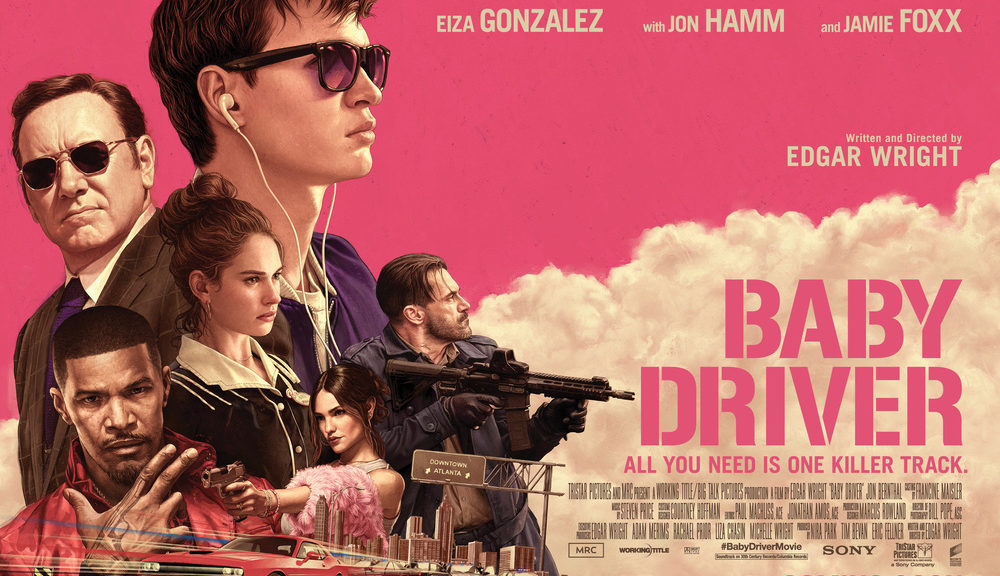 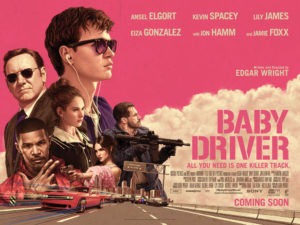 In a movie there is the image, the score, the sound effects, the performances, the camera movement and, if so chosen, the colour. Usually one element shines or we can say that two were in great harmony, but almost never can they all be brought together, layered and baked to create one infusion of all creating a great experience.

Like what Damien Chazelle did with La La Land, Edgar Wright takes the elements, aesthetics and sensibilities of the old and create something modern with them. With that movie it was the Hollywood musicals, here it’s the pulpy heist movie.

The car pulls up outside a bank three of the people in the car get out, go to the trunk and take out guns then they slip on masks and enter. Another remains in the car, a young man that decides to lip sync along to the tune playing on his iPod. When they come back he drives.  The young man behind the wheel goes by Baby.

Baby is a fresh faced young man that’s constantly plugged into his iPod listening to music with a pair of sunglasses on. He listens to music because he suffered an accident at a young age so he plays music to drown it out. Ansel Elgort plays him with swaying interest. At times wanders through life being much more interested with the music playing in his ears and others completely focused on his situation.

Baby’s employer and the one who setups these heists is Doc (Kevin Spacey) a controlling, nonsense man that goes by the mentality that it’s either his way or the highway. There’s also Buddy (John Hamm) and Darling (Eliza Gonzalez) a married couple that are like Bonnie & Clyde, happiest to be in each-others company while pulling these jobs. Then there’s Bats (Jamie Foxx) who seems more than a little unhinged, crime seems to come almost too easy to him. Naturally these are just code-names so none of the members can turn in the other as well as making the characters more easy to remember, like in Reservoir Dogs.

A an extra storytelling layer the ringing in his ear serves as so much more. We as mammals have learned to be fearful of high-frequency sounds because we used that to predict earthquakes. So that noise is cutting to a deep base instinct within us as human beings. We feel that either the situation is untrustworthy or that something bad is coming.

If you decide to make your movie in colour then you must use the colour. Most times filmmakers have a colour movie because that’s what expected of them and put no extra thought into the extra layer of storytelling they have. Not here. The movie has an appealing colour pallet of minty colours with a few deeper ones in harsher scenes. Every character has their colour which they either wear of expresses itself on the setting.

The editing, like all Wright movies, is a sleek, succinct experience with no frames gone to waste. He uses his regular tricks of panning’s combined with wipe cuts to create a seamless momentum that takes from inside, to outside, from one setting to another in within thirty seconds that would take others much longer. Other times he incorporates long shots that play like a skilful ballet between the actor and the camera. Within the moments of snappy cutting it never becomes confusing or disorientating because a) whats in the shot is simple and clear b) the colour helps to further register who it is doing what.

The soundtrack is composed with the greatest care. Edgar Wright is clearly a music enthusiast but it goes beyond that. We’ve had soundtrack’s with plenty of catchy songs in them (example Guardians of the Galaxy) but this goes deeper. This picks a song and completely dissects it in terms of it meaning, the lyrics, the rhythm and tone and infuses it into the scene. Sometimes it obviously fits the context of the scenes it picked for other times it ironically plays over a contrasting one.

One day, while getting coffee at his regular diner he becomes enchanted by the humming of a waitress Debora (Lily James). They both clearly have a love for songs and being on the road.

I have gone this far in the review without talking about what will probably be the main talking point for other critics, the car chases. They are well executed with fluid camera movements and impressive stunt driving as well as setups that are original, so much so that it’s almost like watching a martial arts fight scene with a car.

Baby Driver is a movie made by a man that loves nearly every aspect of cinema and is talented enough to draw as much as he can from every bit of footage he’s able to show you. Nothing goes to waste and is all entertaining. If you want to have fun you will be, if you wish to have an efficient, well crafted piece of cinema, you will also have that. Either way, take the ride.