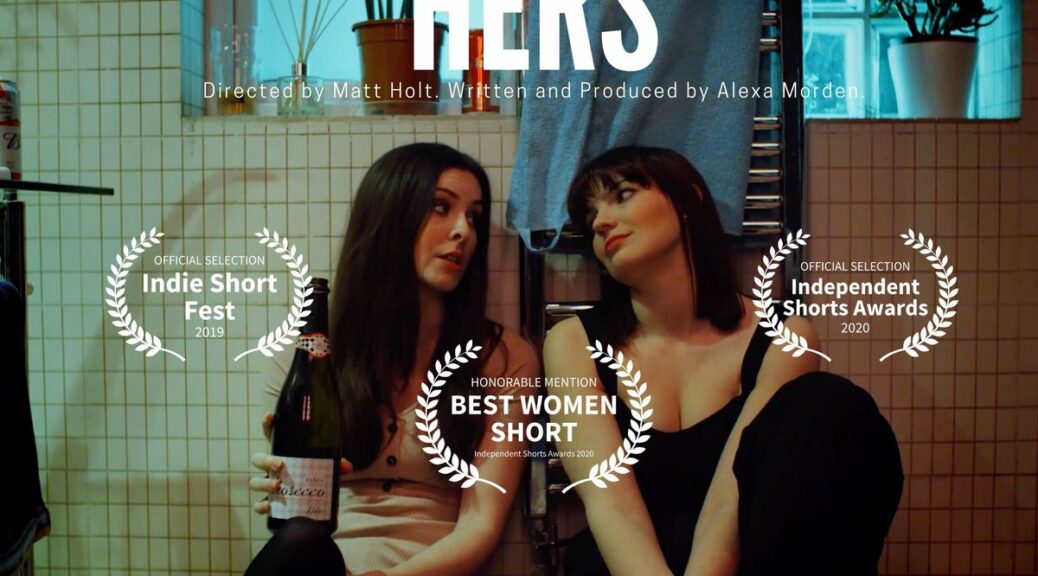 In Alexa Morden and Katie Elin-Salt are two actors determined to change the industry. Through their excellent podcast ‘The 98%’, they give a warts-and-all account of what the #actorslife is truly like. It is an insight that will prove particularly valuable to recent graduates; and for other creative types like me there is plenty to learn from and to relate to. More than anything, it brings a new-found respect for those pursuing this most fraught and fragile of “career” paths.

The creation of Hers by Alexa Morden springs in part from the difficulties of the jobbing actor. For anyone already familiar with their podcast, the idea of acting as a full-time profession is a distant dream for most. Thus, in response (and to quote Morden), ‘When the industry isn’t giving you lemons… grow your own oranges’. The result is this short film that is fresh, fragrant and ripe for watching.

Morden stars as Beth, a young woman who happens upon kindred spirit Laura (played by Elin-Salt) in the bathroom of a house party. They hit it off immediately through a conversation about online dating apps, soon finding themselves acquainted with one another on the tiled floor. What follows is a wonderfully frank scene, featuring full frontal dialogue that is smart, witty and well-polished. Some may consider the so-called ‘X-rated’ content here as being too much. Some would argue that it has been pulled straight from the Fleabag Scriptures. In either case, Hers feels fresh and raw (in spite of the ordinariness of its characters and its mundane setting) suggesting that such explicit conversation around women’s sexual experiences remains rare onscreen.

I would expect nothing less from its two stars however, who to some extent play versions of themselves here. Their no-nonsense, tell-it-like-it-is approach to their podcast is reflected here in the casual flow with which this duologue is delivered. The film benefits greatly from their off-screen chemistry, which makes the friendship that blossoms between their characters onscreen all the more believable. They are well-suited, with Elin-Salt’s strong South Walian phrasing and expressive movement providing a nicely-balanced contrast to Morden’s softer tone and sharply defined actions. They have the makings of a very entertaining partnership. In the real world, of course, this is already a reality. But there is also something about these two characters that, at the end of the film, makes you want more of their company.

This may be a one-off piece. But Hers has the potential to be something much bigger.

To find out more about The 98% podcast, click here.