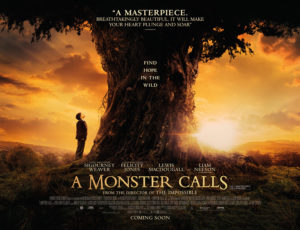 “We need monsters to explain the world. Because without them, we cannot explain our place in the universe.”
Guillermo Del Toro
A Monster Calls is a fantasy realism movie, I don’t believe many or even any other movie can claim that it is simultaneously such opposing things. But this movie knows that children, adults and human beings are contradictory by their nature and they are never truly only one thing and all have their ways of coping with hardships.
Conner is a child that is smart, creative and unhappy with everything around him. In his house he draws in his room and his mother (Felicity Jones) is sick but promises she’ll get better. Staying with them now is his Grandmother (Sigourney Weaver). Her presence means that his mother will most likely go, so Conner rejects her and her fussy ways. Also coming back is his estranged father (Tony Kebbell) that is there for Connor, but only in small amounts, never able to fully commit. Lewis MacDougall is able to handle this extremely heavy, complex material and tackle it. He does not make it look easy, that is what makes the performance effective. He looks like he is at war within himself, every-time some adult tells him something he is completely dissatisfied with it. The ache, pain and frustration that MacDougall portrays gives this character weight and makes him real.

When the clock strikes 12:07 from over the hill and far away there is a rustling and an aching noise and what forms is a monster and makes its way to Connors house. It smashes through his bedroom wall, picks him up and tells him that he will tell him three stories, then Connor will tell him his nightmare, which is also a truth. The Monster (Liam Neeson) is a Yew tree that has come to life from over the hill next to a church. He is shaped like a human but giant sized and obviously made from a tree. With twisting branched doubling as muscles. The monsters and Connor’s interactions are like that of a strict adult or a teacher speaking to a child. It takes a rough tone in it’s voice, doesn’t tolerate any of his disrespect but also wants to nurture Connor, to explain important thing to him, so it doesn’t just get angry or revert to insulting him. It has a purpose.
All the stories seem like regular fables that we’ve heard in some way, however, when the ending comes it turn out that the characters are not what they originally appeared to be, others are more sympathetic than we would like. Connor doesn’t see the point in them. When it comes time for the Monster to tell it’s stories it becomes a shifting picture book animation.
There are visual choices that are made in this movie which you could simply label “cool” or “pretty” when seen initially. However through the entire watching of the movie you see that there is a reason why. These are the best kind of visually creative decisions, one that look great but also feed into the meaning of the world. It is as Guillermo Del Toro describes “Eye protein, not eye candy.”
Stories are escapes from reality, but they also help shape reality. We escape into stories when we need a break but to places and characters that help us understand out troubles, vices and tragedies.