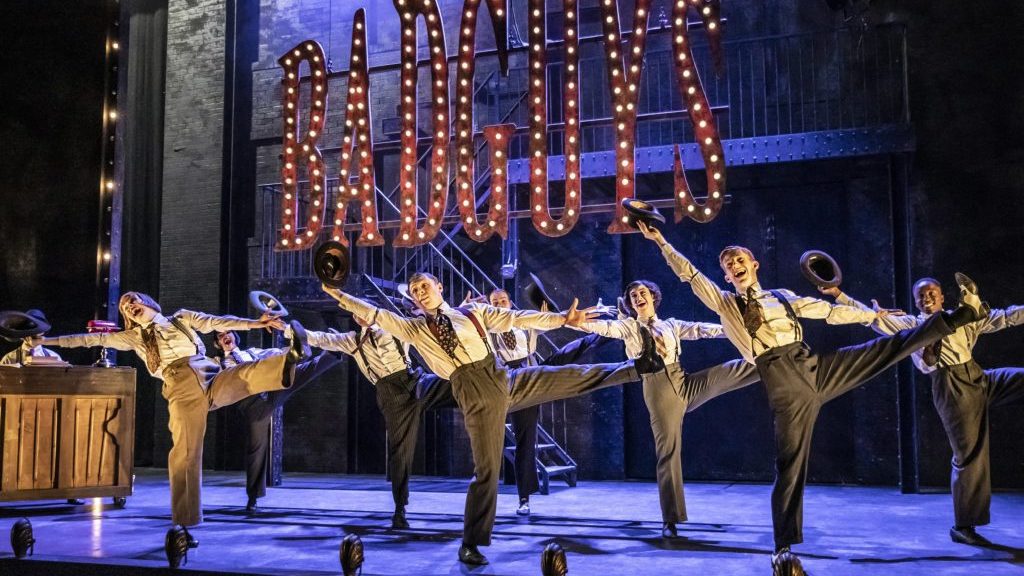 Prior to actually taking my seat in the Donald Gordon theatre in Wales Millennium Centre, I was talking to a friend about how I was attending the press evening for Bugsy Malone. This comment was met with an extremely perplexed and confused face and then followed by the remark “I didn’t know you were a fan of grime music?” This miscommunication occurred because I was not aware but there is an extremely popular rapper who goes by the moniker Bugzy Malone. Even in teaching, I often forget that people oftentimes do not have the same experiences growing up and often the list of movies, books, plays etc that were a key part of my upbringing are different from person to person. For those who were not aware Bugsy Malone (with an “s”, not a “z”) is a stage musical/film that tells the story of two rival gangs in New York with one rather unique twist. The lead characters are played by a collection of child actors who run around shooting each other with pies creating an almost comedy spoof of classic gangster movies.

There is no doubt that at some point or another in your life you have heard the famous warning you should “never work with children or animals.” We have all seen some variation of a video when a young child takes to the mic and let out the wildest comments that leaves you wondering where that comes from. In the world of theatre this due to the unpredictable nature of these two groups and their likelihood to forget lines, mess up choreography or miss cues. However, if this cast of incredibly talented performers is anything to go by then this saying needs to be retired ASAP! Every one of the principal cast members showcased the most incredible professionalism, confidence, talent and stage presence that the majority of people (myself included) can only dream of!

The entire show was anchored by the wonderfully talented Gabriel Payne who plus the titular role and cheeky wannabe gangster Bugsy Malone himself. Taking on the lead role of a musical is intimidating for a seasoned performer but Gabriel did not seem fazed in the slightest, in fact, every single moment this young performer graced the stage (which was an overwhelming amount for a such a young performer) he was flawlessly in character, mentally present and used every inch of the stage that had the audience in constant hysterics. One of my favourite numbers in the entire musical would have to be “down and out” which was led by Bugsy and empowered the remaining characters to join in and fight against the bad guys in the story. Gabriel used this number to show off that he is not only a talented actor but also possesses incredible vocal talents. This performance was so fantastic that the empowering message transcended the narrative itself and had the audience wanted to get up and join the revolution themselves.

Towards the beginning sections of the musical we are introduced to the eccentric mob boss and owner of the liveliest club to ever exist, Fat Sam played by the brilliant Albie Snelson! At the beginning of the show, we meet this character as an over-the-top personality that has a sense of Donald Trump about him but as the story progress, and his close friends are taken out, he becomes more and more desperate and frenzied which was captured beautifully by Albie. One of my highlights in the entire show would have to be a moment at his lowest where Sam is forced to carry out his own scene changes which has Albie acknowledging the lack of stage crew and having to run around at take all the set of chair. After becoming overcome with emotions after his invention leads to the loss of one of his closest friends, the lights do not go down leading Fat Sam on stage audibly asking for a scene change. The young performer performed a series of hilarious fourth wall breaks as he ran around the stage wheeling off props and staging which had the audience rolling with laughter throughout!

Both Bugsy and Fat Sam are involved in the brilliant car chase that brings a conclusive end to act one. The creative team working on this production cleverly used a series of strobe lights to portray the high-speed and extremely intense car chase (despite only having one car on stage) which was amazing to watch!

I also thoroughly enjoyed the recognisable song “So You Wanna Be a Boxer?” which was an extremely high-energy, dance-heavy, ensemble spectacle that was cleverly choreographed to include iconic boxing-based movements such as skipping, using a punching bag and even stepping into the ring. The number built up to the large-scale performance logically that had the audiences eyes racing across the stage as so much was going on! Talking about theatric experiences , I also loved the song “Bad Guys” that saw Fat Sam’s henchmen deliver a wonderfully over-the-top, classic Broadway-style song all about why they turned to a life of crime. Everyone of the performers leaned heavily into the exaggerated-ness of the number with fantastic facial expressions, massive movements and involving the audience. The last thing I would have expected from this hamster spoof movie would what could only be described as a rave/club mega-mix with the younger performers living their best lives and showcasing their dance skills with a range of unique tricks!

Overall, Bugsy Malone, The musical is a cleverly written gangster spoof that removes the violence we have come to expect from this genre. Breaking up each ‘death’ having a comedic scene to help soften the idea of a character being shot. As expected, the younger cast members really shine with each showcasing tremendous amounts of talent, professionalism and unlimited potential!