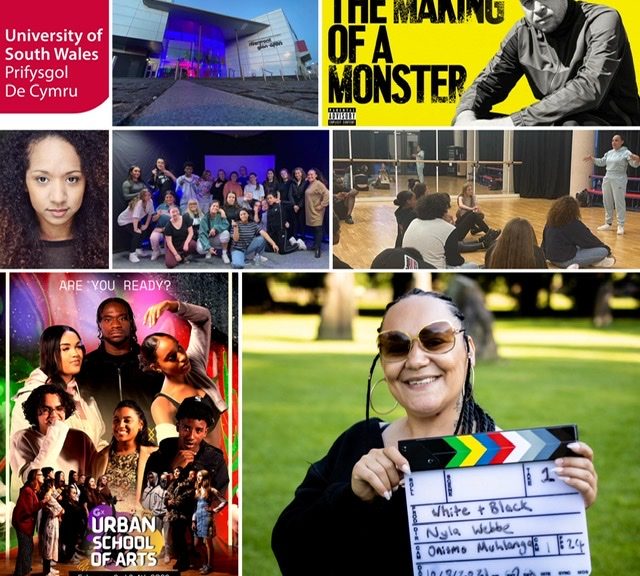 Interviewed by Guy O’Donnell, Director Get the Chance

Hi Nyla great to meet you, what got you interested in the arts?

For as long as I remember I have always had a love for performing. My parents said that they would watch me with my teddies in the garden pretending I was in another world and talking to myself, I was always creating stories and living in my own imagination. I also attended a very creative church growing up and from the age of 6-12 I was involved in productions, always singing, dancing and acting.

You are the Creative Arts Development Officer for G Expressions based in Newport, the organisation “works to support young people aged 10-25 to dance develop and achieve their dreams. Through dance, theatre, and leadership activities , giving young people the confidence, tools and skills to achieve their goals.” How did you come to be involved in the organisation and why is its work important?

My family members run the organisation and since it began in 2010 I have always been involved in some shape or form. I was a young mum, therefore my children were my priority and my personal dreams of performing were put to the side but I assisted with G-Expressions on projects and would help out with dance at their previous studio ‘Bella Bella’. When they started doing theatre shows in 2014 I was keen to help out and began shadowing and assisting the writer and director of the shows, which happened to be Alexandria Riley.

I then made my debut as a starring role in their production of ‘Sisters Acting up’ and felt such a buzz, even being at the age of 28 it was an amazing feeling and seeing how G-Expressions facilitate all their service users and staff, giving them a platform to achieve their dreams was such a great feeling. I then became an assistant director on their last show ‘Hard Knock Life’ and also got my job as Creative Arts Development Officer.

Being able to support young people in exploring their creative gifts is like a dream job for me. Giving them a safe place where they don’t feel judged and can be who they want to be, with the encouragement and guidance to do so gives them confidence and self-belief to reach their full potential.

You have written and are currently working on a new live production for G Expressions called Urban School of Arts. The production is described as “An original story filled with dance and drama about young people surviving their journey through performing arts school, all in hopes of pursuing their dreams of becoming artists” Can you tell us more about the creative process for the production and your intentions for it?

I began writing the story line during the Pandemic, after discussions with young people during a podcast I had set up through G-Expressions called ‘Say it How it is’. It was a great opportunity for young people to talk about different topics that they felt they were affected by and allowed them to talk openly and honestly, as most had said that they don’t feel listened to or even understood by authorities and adults. The stories came from real life topics and made me want to raise awareness about these topics that young people face, to help them talk more about it but to also give them a platform to express themselves in a creative way where they can be heard. I always wanted it to be an original as in the past we have used music that people know but have always had the issues of copyright, but I felt that we were in a place where we could offer more opportunities for artists to be recognised for their talents. I worked with some local young artists who love to write and produce and we managed to get funding from the High Sheriff to bring in a professional producer and work in the studio to record these songs. We now have a soundtrack alongside the show and I would love to see this tour and possibly see other drama schools put it on, who knows?

Urban School of Arts can be seen at The Riverfront Theatre, Newport from 03-04 Feb, tickets can be booked here

Much of your work takes place in Newport and is supported by The University of South Wales and The Riverfront Theatre, what more can be done to create opportunities for young creatives based in Newport?

We need more funding and buildings, it’s a simple answer really. G-Expressions are fortunate to have such a great partnership with USW and are now building on their relationship with The Riverfront Theatre and I am hoping that more opportunities come from this show. Access for young people interested in the arts is difficult, especially the young people we work with who don’t have the right backgrounds or finances. There needs to be more training and projects for them to be involved in.

If you were able to fund an area of the arts what would this be and why?

Training and development for artists who are new and need that bit of support. For myself, giving opportunities is so important.

What currently inspires you about the arts in the UK?

People who are doing things their way and making their mark. I feel that there is so much talent out there that people don’t know about, but they are creeping through the gaps and slowly getting noticed. I am inspired by those who don’t quit, those theatre groups and artists who are doing what they love despite the challenges they face is inspiring.

‘The Making of a Monster’- Connor Allen’s raw talent and vulnerability to be brave and so in your face was a true example of an all-round creative. It was a brilliant show that I hope continues and is recognised for its genius way of writing and performance.