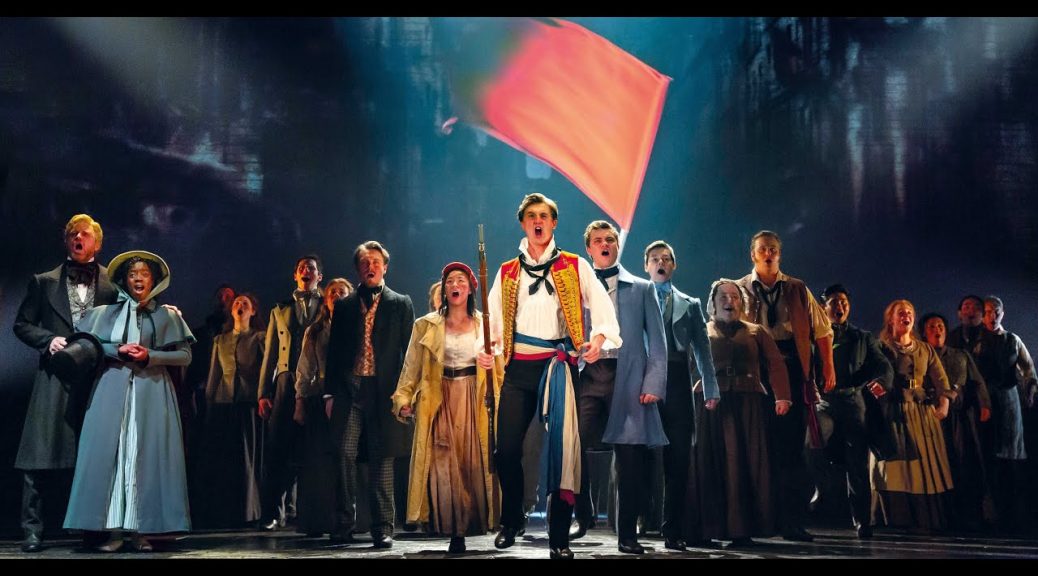 Even if you’ve been effectively living under a rock since the 80’s, you might at least have a passing familiarity with the striking lead imagery for this big-hitting musical. The banner of the iconic young orphan and the red flag waving behind her is a permanent fixture in London’s West End and a mecca for theatre goers.

Les Miserables is one of theatre’s ‘big boys’, you may have never read Victor Hugo’s 1861 novel or even sat through a musical before but between Alain Boubil (Book and Lyrics), Claude-Michel Schonberg’s Music and Cameron Mackintosh’s golden touch as legendary producer, the production’s breakout songs have become synonymous with the musical theatre tradition, a crossover success as the songs (I Dreamed a Dream, Do You Hear the People Sing, Bring Him Home) have continued to catch the imagination of audiences around the world.

Seeing the show in 2022 hits different, too. When Victor Hugo penned the original story during turbulent times in 19th century France, things were bad. Wages were being driven down and poverty was rife, while profits for industrialists were soaring. Despite a revolution and revolt against the French King, though – the upper middle classes still reaped the benefits. A new Royal King was anointed – but still, workers were suppressed against a backdrop of “enrichissez-vous” (getting rich) under the leadership of Louis Phillipe. Some things never change, it seems.  By the time we get to the song “Look Down” and the pleading chorus of beggars painting a woeful picture of no safety nets, no compassion and no grace for those unfortunate enough to be born poor – you will sadly relate if you are currently living in Tory Britain in 2022. The wealth gap has never been bigger and we’re sliding backwards to 1815, more’s the pity.

The opening for this show (beautifully staged in Cardiff under the watchful eye of Directors Laurence Connor and James Powell along with Designer Matt Kinley), brings you into the eye of the storm during this era of unrest, as lead character Valjean’s backstory as a prisoner in a chain gang make their entrance. Even as we skip forward to 1823, conditions are still no better – and workers isolate and turn on one another in a vicious “dog eat dog” environment. We’re introduced to Fantine (beautifully played by Lauren Drew) and in time-honoured tradition of my uncanny ability to tear up at the merest hint of a ballad, her rendition of “I Dreamed a Dream” instantly had me in tears. This is a production that is guaranteed to wow you and pack a real punch. The ensemble cast skillfully demonstrates the pressure, the desperation, the cruelty and injustice of this era and the glimmer of hope that can be found in friendships and lovers.

Despite being one of the “old kids on the block” this is a fairly timeless story and the production still feels fresh, I saw the show twice in one week and once with my teenage daughter. As parents of teenagers will know, it’s not easy keeping a Tik-Toking teen engaged – and this is a meaty show, too with a running time of over 2.5 hours. I won’t lie, it does feel long. It definitely felt long sitting on the fourth level (and very hot, too!), but numb bums and sweaty pits aside, this is a wondrous production. If you’re a sap like me, your belly will flip and you will blub (Oh Fantine!).

For a show over fourty years old, it probably wouldn’t pass the theatre equivalent of the Bechdel Test, understandable given that this is a male-dominated environment of uprising, war and revolution. The strongest and most complex female role in this production is Eponine and it was a joy to watch Siobhan O-Driscoll shine in this role. I’m not sure if I detected some Scourse undertones to her accent…but it’s lovely to hear some accent diversity on stage. Cosette gets a rough deal as a character, I feel. She is an archetype of a female love interest and sadly her most interesting element to her character happens in the past, while she is under the guardianship of the Inkeepers. Speaking of Inkeepers, they are utterly brilliant on stage and a very welcome moment of light relief. Merthyr’s own Ian Hughes (as Monsieur Therbardier) and his side-kick Tessa Kadler command the stage and offer a riotous turn in “Master of the House”. Finally, we mustn’t forget the two leads Dean Chisnall (as Jean Valjean) and Nic Greenshields as Javert. They already have an exemplary record of theatre credits under their belt and their powerful performances on this tour will no doubt pave the way to more future greatness. I thoroughly enjoyed this show and I can’t believe I waited so long to see it on stage.

Les Mis is playing at The WMC in Cardiff until 14th January. If you’re getting the new year blues, I recommend a front seat at the French revolution in the 1830’s…bring your tissues…!