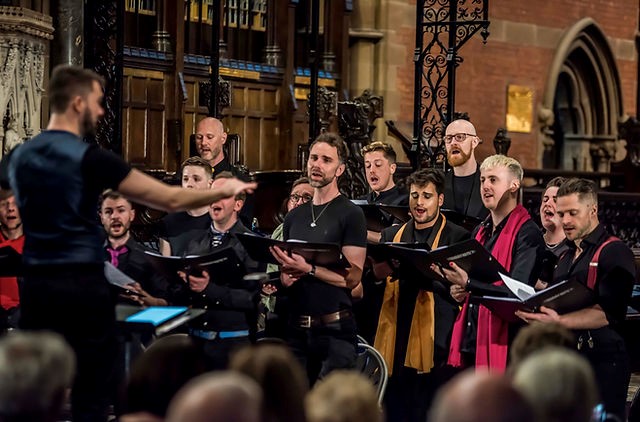 More local artists and a chance to support for LGBT Manchester based work was my goal. The Sunday Boys are the city’s low voiced gay choir and female choir Meraki collaborated on a rather telling piece. The ladies and gay men who are friends, who share mutual love and respect of each other is a less trodden ground in queer circles.

In this cantata, Michael Betteridge uses flashes of John Adams and Benjamin Britten, the words here by Rebecca Hurst being very casual and sometimes touching. I was thinking about the female friends in my own life, the mutual understandings we have about life and love. Betteridge tries out some challenging bits for both choirs, in some instances rich harmonised sonorities poured out with loveliness. I wouldn’t say I was as nourished by the whole as I should have been, a lot of the vocal line remained a bit dull, though the instrumentalist had some tricks and sweet moments for piano, percussion, strings and more.

Betteridge shared conducting duties with Michelle Robinson, a fitting thing within the context of the words. Meraki did sometimes have the little wobble in the vocal line, though things usually got back to basics and they followed through. Dare I say it, I’d love to see Betteridge take things to a higher, experimental plain. Both these choir have made waves and more impassioned work will get the word out. This Stoller Hall audience seemed to have enjoyed themselves, the acoustic of this newish venue is a pearl in the Manchester cultural scene.

I was unaware there was a second half to the evening where both choirs would perform their own repertoire. I had to love them and leave them as I transgressed over to the Carole Nash Hall within the same venue for Will Pound and Jenn Butterworth. Drinking in as much as possible before I shoot off back to Wales.