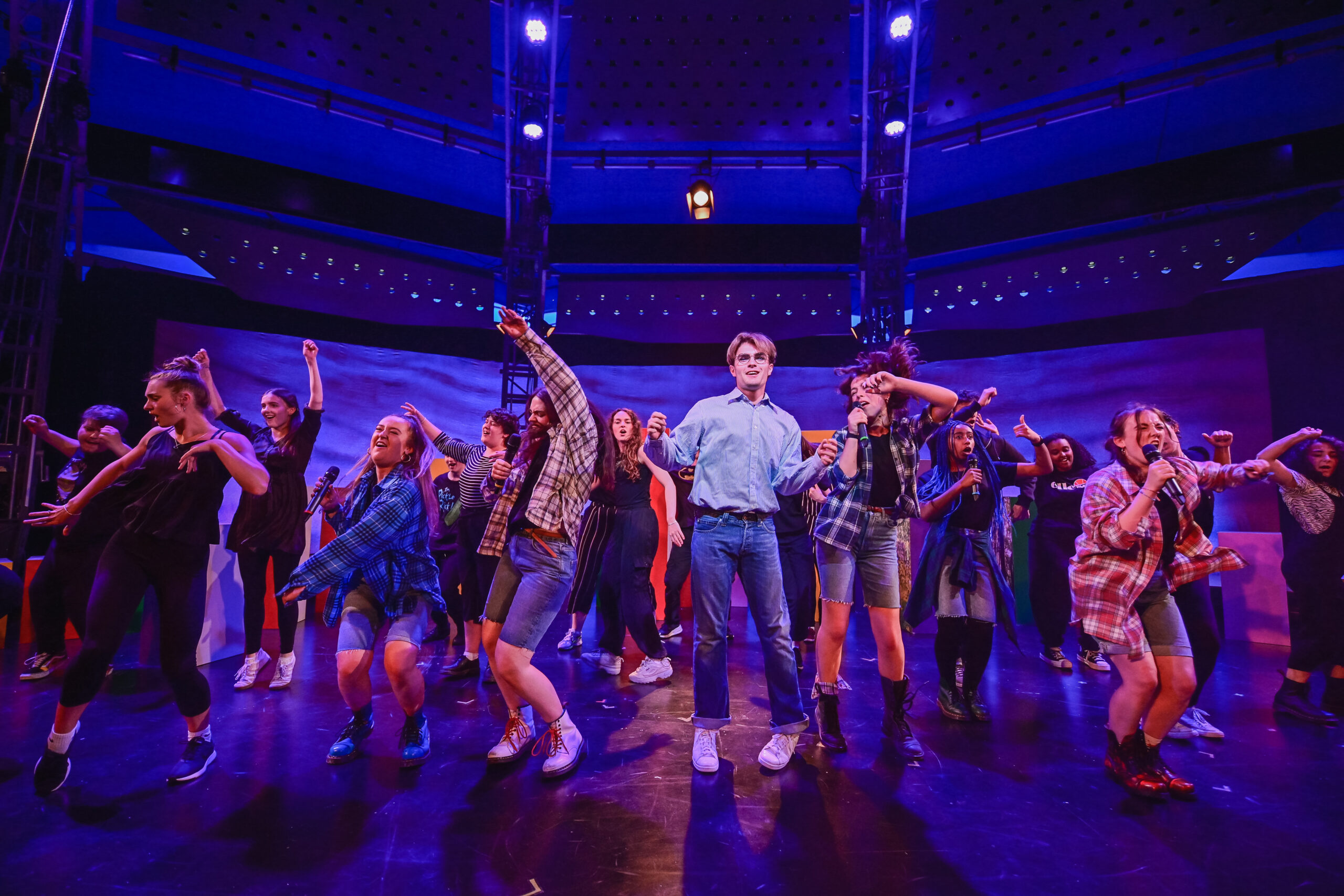 The National Youth Theatre of Wales isn’t a company like other theatre companies, so its work can’t be lined up against standard productions. It’s more akin to a BTEC Performing Arts course in which the end-of-year show is designed to give all students an equal opportunity to participate.  Because of this, there aren’t individual stars whose performances can be picked out.  In The In-Between, the main plotline features a heroine but she is played by different performers at different times.

Reviewing is not course moderating.  Reviewers can’t comment on the process that lies behind the end product, even though the workshopping will have been a key part of an educational process and will be very valuable to the student. The performance is only the tip of an iceberg, however exciting it may be.

Equally, you can’t say much about the script, which is specially worked up for this production and which may never be used again.  So, there are difficulties reviewing The In-Between.

To stick to facts, the production features twenty-three performers, backed by a creative team of twenty-five.  It’s no small undertaking. The combined work of these people (assisted by staff at Theatr Clwd) is compressed into a fifty-five minute, single act showcase.  The linking theme is the story of Fay, a student on a performing arts course who is considering dropping out.  The show starts with Fay’s failure to hand in her homework, or perform ‘her’ song for her lecturer.  It ends with her predictably deciding to stay on and at the end, supported by the entire cast, she sings what is quite an effective pop song, celebrating the state of being in between training and working.

As Fay’s story unfolds, group activity is choreographed around a series of small sketches.  There is a constant supply of business, much of which centres on a stolen letter.  This handwritten letter, in which Fay tells her lecturer she is dropping out, is recognised as being an anachronism and a bit of a joke.  Dialogue throughout is in English but it’s peppered with Welsh in an evocative way.  Overhead screens carry the script, like subtitles, and a signer works at the side of the stage for deaf members of the audience.  There were a couple of fluffed lines and the screens seemed to get stuck at one point but generally everything was done enthusiastically and well.

– Only I did want a bit more.  I wanted more character acting, allowing a dramatic penetration of Fay’s crisis of confidence.  The self-conscious conversations about the problems of working in the industry didn’t achieve this in any depth, since students really know little about what awaits them down the line.  There might have been a second person, a friend, who does leave the course, recognising that there are other things in life beside the performing arts. (Sacrilege!) The snatches of character acting there were – like the cameo of a grandmother and the emergency call handler who breaks out into ‘Staying Alive’ to demonstrate the kiss of life (!) – were delivered properly, making you think the cast members could easily have done more of the same.

Perhaps I wanted more conventional acting because I don’t greatly like musicals, even though I recognise their popularity and their economic importance for theatres and for television.  Unless there is an exceptional score, as in West Side Story or Mac The Knife, personally I never feel musicals rise above the level of light entertainment.  I prefer shows that make a demand on my intelligence rather than ones that aim to make me tap my feet.  I like plays where verbal control and projection goes into lines rather than songs and when physical agility is present in movements and gestures and not just in dances.

I am also intrigued by work where the two genres overlap.  However, in The In-Between there is no question but that music theatre is the be-all and end-all.  It comes with the fairy tale suggestion that fame and fortune do wait around the corner for the girl who is determined to make it come what may. I didn’t engage with this idea.  I wasn’t bothered about whether Fay delivered her course work or not.  I started thinking instead about the cast and the fact that there were more than four times as many young women as young men performing.  A BTEC computer course would probably reverse this statistic. (In contrast, the production team is almost evenly split and the script was written by a woman and a man.)  Maybe this production could have referenced the social conditioning behind gender imbalances.

I would have enjoyed an exploration of late adolescence in which anxiety really came centre stage.  Anxiety is hardly the sole preserve of those on performing arts courses: it is wide-spread and not just in the student community.  Watching one character overcome anxiety in a convincing way would have been interesting.  Watching another fall victim to it might have been moving.  Could there have been a second half?

You could say my taste means I am not the target audience but another feature of this particular type of work is that it has no target.  It was pleasing to see the large audience in the temporary auditorium at Theatr Clwd  (where the buildings are being redeveloped) was an unusual mixture of young and old and the show did have something for everyone – we laughed and applauded – but it didn’t have quite enough of anything in particular to mark it out.

Maybe the title – and the subject of Fay’s delayed solo – says it all.  The show itself is in-between genres.  It left me in between admiring it for what it contained and for what it allowed its young performers to do but fussing about what it left out.  For a student show, it was very entertaining. As a piece of contemporary theatre, it fell a bit short.