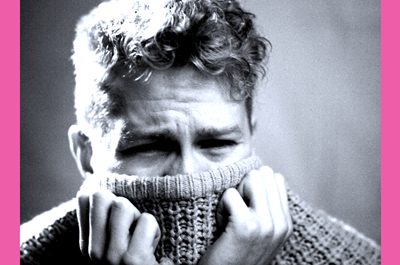 OCD, or Obsessive Compulsive Disorder is close to me and the people in my life. Recent theatre I’ve seen and my own work/fundraisers remain in the back of my head. How can we portray this ghastly condition on the stage. Can we truly make people care?

Along comes StammerMouth with an expectedly profound piece, about OCD and those around the people who experience it. Directed by Nerida Bradley with a sharp eye for detail, CHOO CHOO has the snazzy, primary coloured vibe of a 70s children’s programme. Yet, a helping of Don’t Hug Me, I’m Scared and WandaVision peeps through with an angular distortion as the story stagnates. The feelings of isolation and worsening mental states are never far away in an ever increasing bout of anxiety. Both characters of Nye and Duncan have a strong, brotherly bond, leading to some later touching bits. You can only assume they spent lockdown together and this was the catalyst for the entire show.

Nye Russel Thompson (who also wrote the work) has poured his heart out here, the debilitating nature of the disorder constantly compromising his way of life. It’s clear that the condition can convince you making yourself think you’re capable of awful things. A radio set seen on a table spouts bile about a knife next to it and other horrible ideas that are naturally never acted upon. The efforts of fellow performer Duncan Hallis adds a soulful energy to the show, sincere in more sympathetic scenes. Both actors bounce off each other very skilfully, the humour is often solid. Some surreal moments, with dark comebacks remain as highlights.

Much love needs to be sent to Julie Doyle, the BSL interpreter for the evening. Though she was a slight part in the actual drama, she could have been utilised even more, her loitering of  downstage right apparent throughout. Some sweet moments came when people in the audience before the show would sign with her, with some bouts of laughter. The set as well is simple and effective, white blocks which change colour work very well in the space. The opening song, heard throughout is such a catchy tune, I’ve yet to get it out of my head (speaking of which, the Kylie scene in a manic ). The song itself is a roll call for both guys, Nye’s slipping out of tune and rhythm due to the descent of his intrusive thoughts.

It’s super to see more theatre being made about mental health, especially after the life altering pandemic, something were not fully out of. I said in another recent review about OCD that “work like this could save lives”. This remains the case with this most recent piece from StammerMouth.

CHOO CHOO! You are not your thoughts continues at Chapter Arts Centre till 23rd July 2022.