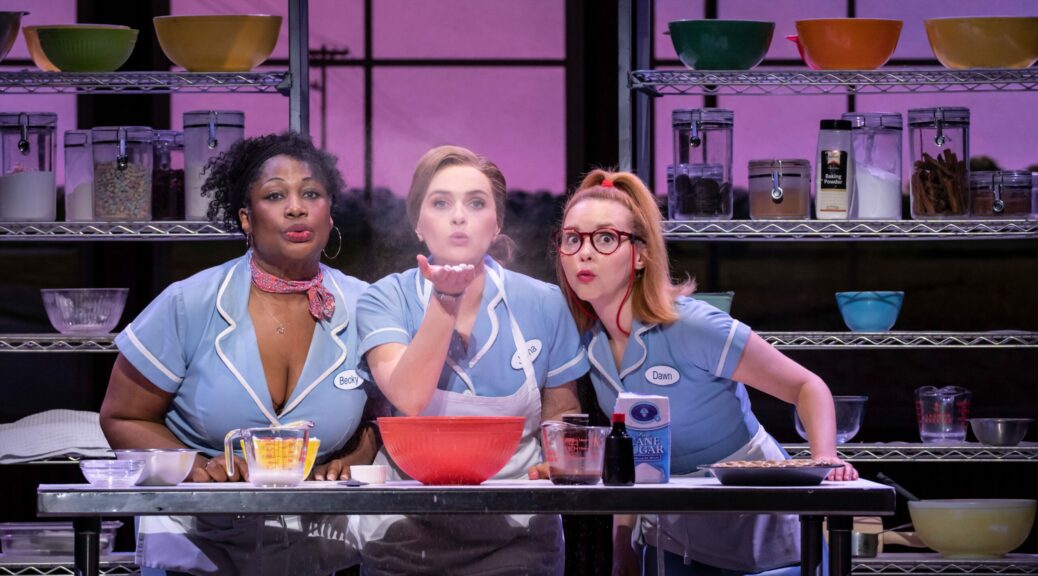 Take one charming leading lady, a dollop of catchy songs, a ballad or two to pull on your heartstrings, sprinkle with silliness and mix with loveable characters to create the perfect recipe for a feelgood musical.

The ingredients were expertly balanced at the performance of the Tony Award nominated hit musical Waitress in Cardiff’s Wales Millennium Centre on Tuesday evening.

Based on the 2007 Adrienne Shelly film, Waitress tells the story of Jenna who works in Joe’s Pie Diner in the Deep South.  Jenna is unhappy in her marriage to the controlling Earl and feels trapped in her mundane life where every day is a carbon copy of the last.  To make matters worse, as the show opens, Jenna discovers that she is pregnant, expressing her disappointment during “The Negative” where she is consoled by her colleagues Becky and Dawn.   Jenna finds solace in baking and, in particular, in making pies – she makes a different pie for every day of the week and there isn’t an occasion that she can’t think of the perfect recipe, including “my eggs failed me pie” and “in the pursuit of happiness pie”.  Even though she knows it’s a “Bad Idea” Jenna embarks on an affair with her hunky gynaecologist Dr Pomatter.  We follow her journey as she tries to escape her hum drum life.

On the face of it the storyline is fairly predictable but as it develops we realise there is more to the characters than meets the eye.  Jenna is a complicated leading lady, describing herself as being “imperfect but she tries” – she has an affair, she is unmaternal and she lies to her husband.  In fact, in a turn from traditional musical theatre, all the characters are in some way flawed and morally ambiguous, making them more relatable to the audience.

The cast are impressive in portraying these characters and all give strong performances, approaching their roles with sensitivity.  Chelsea Halfpenny is particularly noteworthy as Jenna, bringing the house down with her vocal ability in the heart wrenching “She Used to Be Mine”.  Evelyn Hoskins and George Crawford pitch their performances of goofy couple Dawn and Ogie just right, providing plenty of laughs while still making the audience believe in their love story.

The production, directed by Diane Paulus is incredibly slick with effortless scene changes supported by the ensemble.  The majority of the action takes place in the diner which has a view of the open highway projected through the windows.  The performance space is reduced in Jenna and Earl’s home, with the ceiling being lowered and the walls drawn in, giving a visual representation of her claustrophobic life.

The band, which does an excellent job of executing Sarah Bareilles’ Nashville worthy score, is situated on stage and form part of the action as patrons of the diner.  Although this is a nice effect, it is distracting at times.

There are moments when the show touches on darker, more gritty themes; Earl is abusive towards Jenna and it is suggested that she witnessed domestic violence as a child.  Jenna’s attitude towards her pregnancy is controversial and Becky is clearly struggling in her role as a carer for her husband.  The show only mentions these issues on a surface level and shies away from exploring them in any depth.  Instead, it reverts to lighthearted humour, opting for a “life must go on” attitude.

The influence of Waitress’ female-led creative team is clear to see – the show is ultimately a celebration of friendship and femininity.  Jenna’s transformation is inspired by the birth of her daughter and the support of her friends rather than being influenced by the male characters in her life.

Just like a slice of freshly baked homemade pie, watching Waitress the musical leaves you with a warm, comforting feeling.  This sweet story isn’t necessarily ground-breaking but it will leave you with a smile on your face, a song in your heart and a skip in your step.