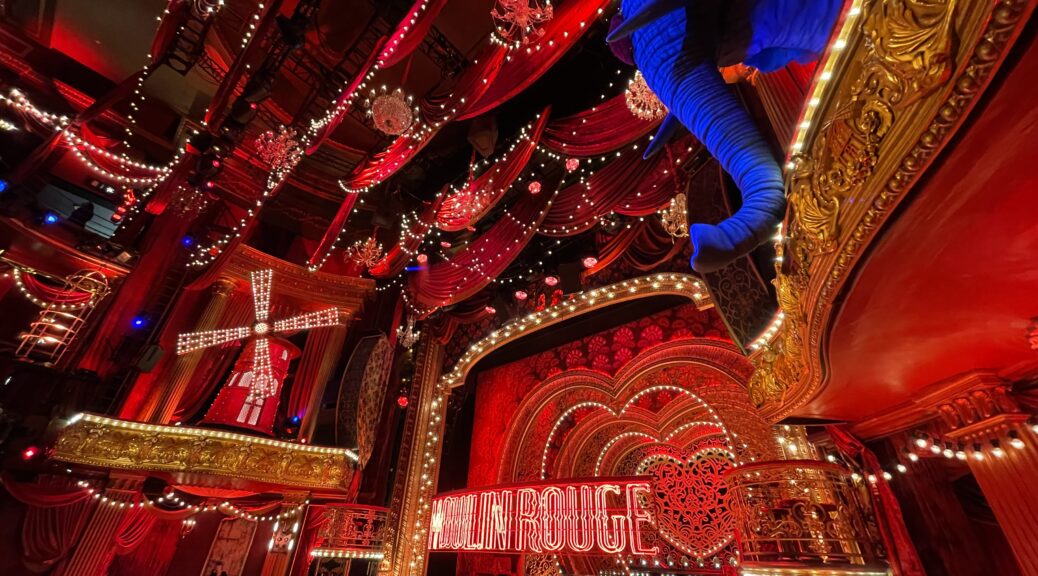 Being a huge fan of the jukebox 2001 blockbuster movie Moulin Rouge, I cannot begin to tell you the excitement when I discovered that the musical adaption was making its way to the Piccadilly Theatre London UK after a successful opening in both NYC and Sydney.

Like the movie, the musical’s score weaves together original songs with popular music, including some of the original songs written in the film’s premier 17 years ago, songs such as Sia’s “Chandlier”,  Gaga’s “Bad Romance” and Katy Perry’s “Firework” , just to name a few.

Moulin Rouge! is set in the Montmartre Quarter of Paris, France, at the turn of the 20th century also referred to as the birthplace of the bohemians that believe in Truth, Beauty, Freedom and Love.

The musical is similar to the movie in plot which tells the story of Christian a young composer, who falls in love with cabaret “Sparkling Diamond” actress Satine (played by the talented and stunning Lissi Lafontaine), who’s paths cross by a fortunate misunderstanding one unforgettable night at the red windmill sparking a secret romance behind the Duke ( Simon Bailey) a jealous and wealthy gentleman who wishes to “own” Satine and the deeds to the Moulin Rouge which is currently run by Harold Ziedler (Clive Carter).

BECAUSE YOU CAN CAN AND MUST MUST

Thankfully I was fortunate enough to purchase the irresistible “Can Can” seats which is a collection of 16 decorative chairs and tables placed right at the front of the action (essentially where the band pit would have originally been), allowing for a fully immersive and interactive view of the show so close to the cast and the extended stage you could see every breath, feel very dance move and spot the intricate details of the set and costumes, this was a theatre experience unlike any I had encountered before.

As you descend into the auditorium you are instantly transported to the Moulin Rouge, Paris 1899 with thick red velvet curtains, dim lighting draped throughout the seating areas held by ornate gold cherubs and a subtle murmur of French instrumentals playing in the background.

As you find your way to your seat you look up at a collection of glittering chandeliers and an elegant elephant to your right followed by a mechanical red windmill to your left all perfectly lit in the rich colours of the Moulin Rouge. If this wasn’t enough to set the scene then maybe the various characters that emerge slowly from the stage will help, each with a story and costumes from rich men in top hats with smoking cigars to dancer girls seductively looking for attention and interacting with anyone in their path.

Act one opens with an explosion of energy, high kicks, backflips and can can lines as Harold Zidler (played by the charismatic Clive Carter who you instantly adore) welcomes all from “aristocrats” with “quail eggs and caviar” to “the rats of the latin quarter, The starving artists and thieves of Montmartre” in an electric mash up of classics before he announces his main act, the sparkling Diamond. At this point it then cuts to an introduction to how song writer Christian (American actor with flawless vocals Jamie Bogyo), meets, artist and play write Toulouse-Lautrec ( a lovable key character played by Jason Pennycooke ) and Santiago ( a Latino legend with excellent precise dance moves played by Elis Lo Tauro ) who share a mash up of T.Rex’s “Children of the revolution”, Lorde “Royals” and Satellites  “Tonight We Are Young” explaining their desires to pitch Christians talents as a composer to Satine in the hope that the Moulin Rouge will fund the production.

Scene change back to the moment that Harold announces Satine and ( spoiler alert ) the sparkling diamond descends from above following a trail of glitter as she seductively sings Shirly Bassey’s “ Diamonds are forever” leading to a whole mash up of songs such as Marilyn Monroe’s “Diamonds are a girls best friend” , Madonna’s “Material girl” Beyonce’s “Single ladies” and Rhinanna’s “Diamonds” all brilliantly hyped by backing dancers and excellent vocals.

Act one transports you backstage of the Moulin Rouge set with black brick wall and various levels as the cast prepare for rehearsals for Christians show (which is being funded by the Duke) unlike any other. It opens with Santiago (Played by Elia Lo Tauro who really does do an incredibly good job with this role with his deep voice and cultured presence) he flirts with Nini (the beautiful Sophie Carmen Jones) and begins to seductively dance and entwine with one another in an intense precise and passionate set of choreography to a medley which begins with Lady Gaga’s “Bad Romance” eventually joined by the whole cast, this was spine tinglingly incredible and one of my favourite scenes in the whole show, the precision of each move was perfectly placed and in controlled unison.

PUTTING ON THE RED LIGHT – MY HIGHTLIGHTS

The sparkling Diamond herself, Satine – with an epic entrance that was beautifully executed by Lissi Lafontaine who does such a wonderful job portraying this character. If you do not love her by the end of the show will leave with a full pack of tissues, unlike most of the auditorium.

Chandelier – no spoilers but this is a fantastic mash up and makes you want to go purchase some lights for your cocktails.

So to summarise – Go watch Moulin Rouge the Musical, This truly was an experience I could not recommend more and a new style of theatre which interacts with its audience and enhances their visit leaving them dazzled for weeks after and believing that “the greatest thing you’ll ever learn, is just to love and be loved in return” (sorry, couldn’t resist).

And if you wish to continue your Parisian style experience, head over to Zedels which is literally across the road from the theatre for Moulin Rouge themed cocktails.