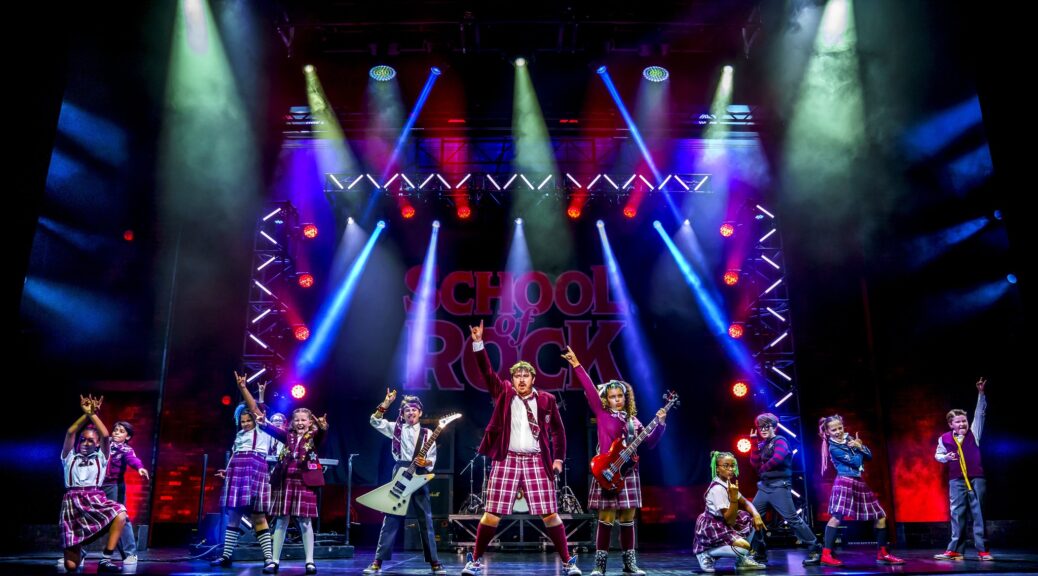 “Stick it to the man” what a ‘rocking’ night we had at the award-winning show School of Rock – The Musical. The performance starts with a message stating that the children in the show do play their own instruments throughout the show and ‘wow’ they are indeed playing live! The young actors seriously have to be witnessed to be believed, they performed a sensational, high energy, hilarious show.

Dewey Finn, played by Jake Sharp, is cast out by his dive-bar bandmates and finds himself in desperate need of cash. He has some questionable habits, such as sniffling, and eating his own belly button gunk, and hasn’t paid the rent on his room in forever. He’s broke, jobless, bandless and soon to be homeless.
He nicks his mate’s teaching credentials to make a few quid at a posh school, and sets about turning his class of straight-A students into a mind-blowing, guitar-shredding, bass-slapping, drum beating, rock band, teaching the pint-sized prodigies what it means to truly rock.

The cast raise the roof and jump around the stage with boundless energy and enthusiasm.

Dewey also falls for the school’s beautiful, uptight headmistress, Miss Mullins, played by Rebecca Lock, she has a secret passion for the music of Stevie Nicks and Dewey helps to bring out the wild child within her. Will they find redemption at the battle of the bands?

I would be singing the praises of the musicians if these were seasoned professional adults but let’s just stop and observe the fact that these are kids! Mini rock legends who smash it, kill it, dice it and slice it and serve you rock n roll raw, live and loving it! The whole cast deserves credit, so take a bow – School Of Rock captures the excitement of live gigs, and how music can shape young lives.

The audience loved it, the cast loved it … and more than a few folk were humming the mantra of ‘stick it to the man’ as they headed off into the night.