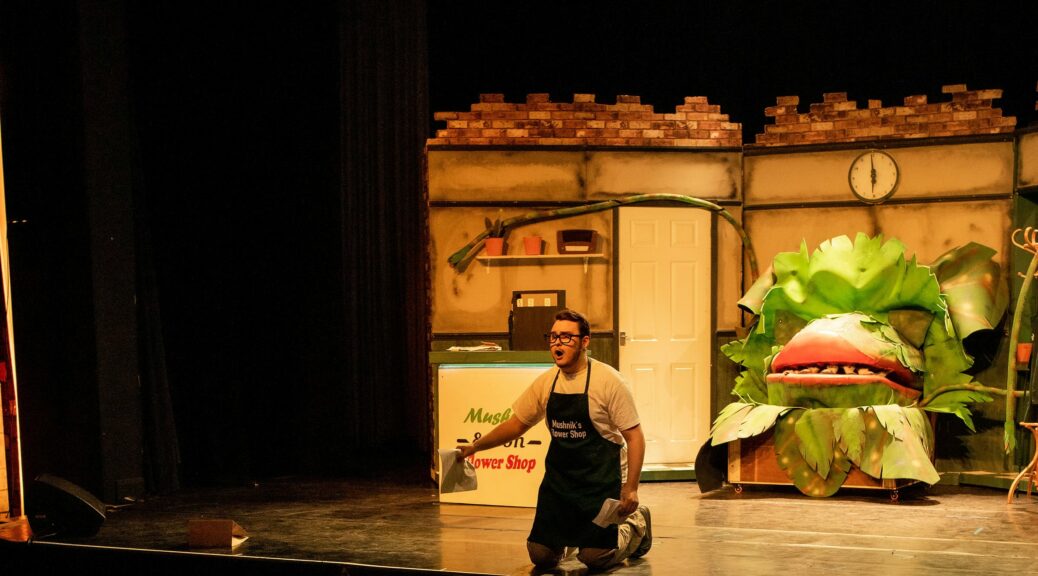 Many may associate the cult-classic Little Shop of Horrors with its 1986 film adaptation starring Rick Moranis, Ellen Greene, and Steve Martin to name but a few (even Bill Murray makes a guest appearance!) The film was based on the 1982 off-Broadway musical of the same name and was well received by critics and audiences alike. Of course, most forget the original film which started it all. The Little Shop of Horrors (1960) written by Charles B. Griffith and directed by Roger Corman is a horror movie and farce about an inadequate florist’s assistant who cultivates a plant which feeds on human blood!

Fast forward fifty plus years and the musical is still going strong, attracting audiences across the globe. This time it was the turn of Kent Academy of Musical Theatre (KAMT). Founded by Jo Mason in 2020, KAMT is a part-time musical theatre academy for all ages, from toddlers right up to adults of any age! They currently run classes in Maidstone and Cranbrook with ambitions to branch out across the county. Considering the academy was founded during a worldwide pandemic, it has gone from strength to strength during its first two years, Little Shop of Horrors being the first production presented by the academy’s adults. Founder and director Jo Mason had been inspired by professional performances of the show in London, most recently Regent’s Park’s contemporary adaptation.

Often, it is more of a challenge to put on a production with a group of adults than with a group of children. Adults take part in amateur theatre as a hobby, something they’re passionate about and want to continue improving at, but something which comes alongside potential parenting, full time jobs and just ‘life’ in general, so it’s always a thrill to see a group of adults who are clearly dedicated to their craft and who have worked so hard to pull a piece of theatre together. It is almost unfair to label this production ‘amateur.’ Although the definition is actually ‘someone who engages in a pursuit on an unpaid basis,’ it has come to mean that an individual is incompetent at something. For example, you might say Little Shop of Horrors’ hero Seymour is an ‘amateur florist’! But this production certainly pushed amateur boundaries.

It is great to see an almost full auditorium at the Glassbox Theatre. It is more important now than ever that audiences support local theatre and it is clear that this audience got more than they bargained for, hearing some wonderful comments and fabulous feedback from the crowd in the interval and beyond. It is clear from the get-go, as the piece opens with the well known ‘Little Shop of Horrors’ title song, that the Urchins, the Greek chorus if you will, are extremely strong vocally. Not missing a note, the harmonies work beautifully, and each Urchin performs their ‘sassy’ role to a tee with plenty of attitude! It is clear not all Urchins are completely comfortable with some of the choreography, but this is made up for in style and voice! The Urchins are certainly at their strongest when ‘setting the scene’ vocally, whether it be as a group or scattered around the stage to portray a time or place.

The set is really striking and the scene changes slick with simple but effective changes as the production progresses…a light on here, a dentist’s chair there and of course, the most obvious change being the ever growing, man-eating plant! All puppets are visually outstanding and the shock and laughter from the audience as the plant chomps its first victim is worth the wait! The costumes have been modernised, with the Urchins in khaki green and black, the dentist in ripped jeans and tattoo sleeves and Audrey has a look of Sandra Dee circa 2022!

There are a few directorial choices which really hit the nail on the head in this production. The first happens during ‘Somewhere That’s Green,’ beautifully sung by Laura Shannon as Audrey. As she continues into the song, we see her don an apron, as if travelling into her own daydream, particularly poignant as she undoes her cast from an arm broken by her nasty dentist boyfriend, Orin. A piece of artificial grass is then rolled out in front of her, unintentionally I think, causing a few giggles, but we are transported with her, into her ideal future. Another ‘different’ take on a musical number is spotted during ‘Suddenly Seymour,’ usually put across as a simple, lovey-dovey song. Instead, although still romantic in parts, we see Audrey and Seymour clearly getting a little hot under the collar as he pulls her blouse from off her shoulder and pins her (gently!) against the wall! Although not expected, we see the sexual tension between the two and it somehow works despite being placed in the middle of a romantic duet! Most productions have their plant’s voice offstage, so it was a surprise to see the plant ‘brought to life’ as a female diva, entering through the door of the florists and interacting with Seymour! This worked effectively and made the plant seem somehow even more eerie and domineering, no longer just a plant but something even more ‘alive’ and capable!

This production was extremely well cast and, aside from a few sound issues, it could not be faulted. We were in great hands with Laura Shannon (Audrey), Ivan Collis (Seymour) and Paul McLaren (Mushnik) from the outset with Ivan Collis putting on an outstanding performance as Seymour, a very consistent performer with great comedy timing and a strong voice to boot. All other roles, ensemble and dancers were incredibly strong and certainly weren’t missed in the action.

This was a fantastic production which thoroughly deserved the standing ovation it received and I’m already looking forward to KAMT’s next production, Calendar Girls, which will be performed on Saturday February 11th, 2023, at the Glassbox Theatre.

Fore more information about KAMT and how to get involved please head to https://www.kamt.co.uk/ or find them on Facebook (just search for Kent Academy of Musical Theatre).