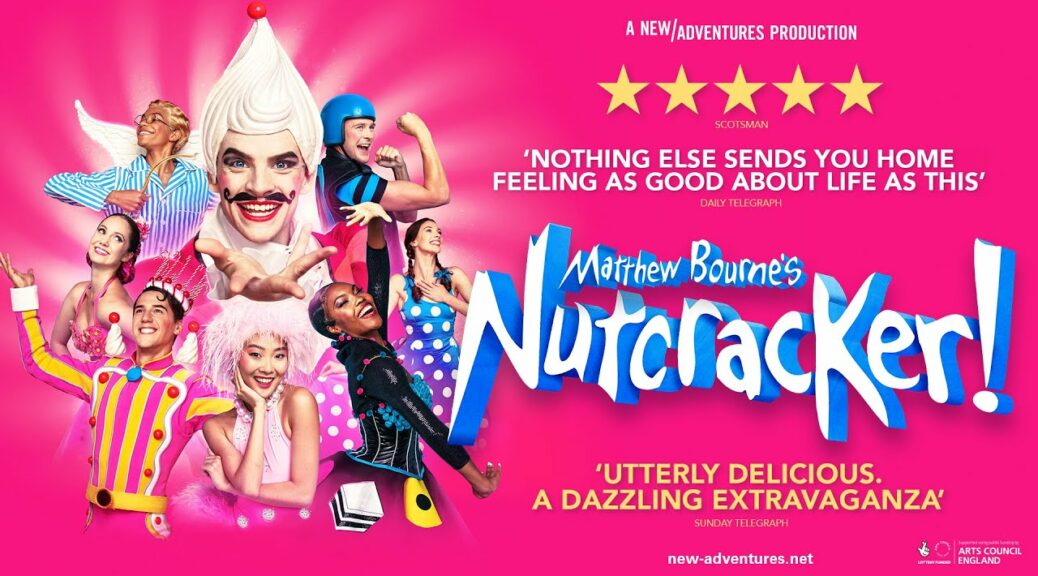 Matthew Bourne has always pushed the boundaries of the ballet world, and he’s back with an innovative reimagining of Tchaikovsky’s most enchanting work: The Nutcracker. Having originally premiered the show in 1992, Bourne and the New Adventures team have added plenty of twists, tweaks, and treats to this sumptuous blend of the classic and the new.

The story might be sparse but Bourne and co have thrown a few more ingredients into the mix. Clara (Katrina Lyndon) is trapped in a dreary orphanage ruled by the maniacal Matron (Daisy May Kemp, dressed as a despotic liquorice allsort) and the dastardly Dr Dross (Danny Reubens: be-whipped, bothered, and be-leathered). On Christmas Eve, Clara and the other orphans are paraded around in front of the genteel governors, whose gifts for the youngsters are snatched away the moment their kindly benefactors leave. But Clara’s grown quite attached to her present: a patched-up doll who becomes a hunky prince (Harrison Dowzell) and spirits the whole company away to Sweetieland.

The stellar orchestra ensures that Tchaikovsky’s score has never sounded more magical, and the sheer skill on display is breath-taking. There’s an effortless elegance to every movement and Bourne’s playful and innovative choreography never disappoints. Lyndon is a compelling lead, especially when sharing the stage with either Dowzell or Jonathon Luke Baker’s naughty Knickerbocker Glory. Ashley Shaw is delectably devious as the sickly-sweet Sugar Plum who’s hiding a bitter centre, and shares an unruly chemistry with Dominic North as the petulant Fritz and, later, the bon vivant Prince Bon Bon (there aren’t many people who could carry off walnut whip epaulettes, but North is one of them).

The first act compellingly subsumes you into a Dickensian purgatory before transporting you to a world of candyfloss and freedom. The second act loses some of the first’s drive but dials up the spectacle: a frothy pink fever dream painted in shades of Busby Berkley and Roy Lichtenstein courtesy of Anthony Ward’s resplendent sets and costumes (though Sugar Plum and Clara’s second act outfits might have benefited from a bit more extravagance). It gets even kookier when the guests start turning up for the royal engagement, everyone from a bunch of hard-boiled Bikers to a Candyfloss clique and a trio of polyamorous toreadors. Meanwhile, the stage is set for the wedding of the century which takes the phrase ‘Let them eat cake’ to a new level – quite literally.

Bourne never takes a story at face value: he shakes it like a snowglobe and weaves magic from the debris. His brand of joyous iconoclasm breathes new, anarchic life into well-trodden tales – and make no mistake, this isn’t your grandmother’s fairy tale: there’s something deliciously risqué about the entrance to Sweetieland being through a pair of cherry-red lips, and even the title itself is a little suggestive. The whole thing is flirtatious, mischievous, and enticingly irreverent. Unlike in the original, there are no sword battles, no royal mice, and the sugar plum fairy is not as sweet as she seems. However, while removing the Mouse King from the narrative gives Clara more agency, it also pits her against another woman in the fight for a man’s affections. Sweetieland might be a transgressive utopia, but it’s still ultimately consumed with the question of which bride will join the groom on top of the cake.

Sleeping Beauty might still be my favourite of Bourne’s new adventures, but Nutcracker! is easily his most joyful. A cacophony of confection from start to finish, it’s a decadent, delightful treat you’ll want to savour for yourself.

Matthew Bourne’s Nutcracker! is playing at the Wales Millennium Centre through 26 March.