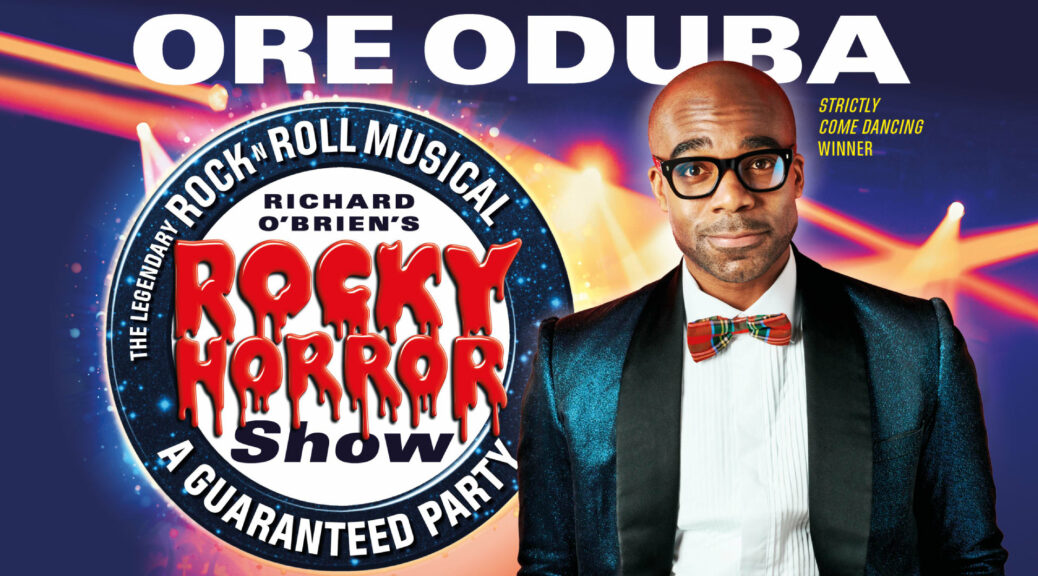 Rocky Horror isn’t just a show: it’s an experience. That’s the promise that has ushered audiences into its weird and wonderful world for nearly fifty years. Starting life as an experimental stage play in 1973, it gained a cult fanbase with the iconic 1975 movie adaptation. The film might have bombed, but its success went nuclear: it exploded on the indie scene, and after the countless midnight showings and Halloween screenings that followed, Richard O’Brien’s counter-cultural magnum opus has made its rambunctious debut in Cardiff to remind us why it’s time to do time warp again.

Brad (Ore Oduba) and Janet (Haley Flaherty) are two college kids who are on the road to marriage – until they get a flat tyre just outside Castle Frankenstein. Pathologically prim and proper, they’ve never put a toe out of line; but now they’ve set foot in the lascivious lair of Dr Frank-N-Furter (Stephen Webb), they’re in for a treat – and a few tricks along the way.

Directed by Christopher Luscombe, Rocky Horror is a non-stop thrill-fest that never comes up for air. The cast are extremely game and honour their filmic counterparts while adding their own unique spin to the characters. And there’s no character more unique than Frank-N-Furter, a role which launched Tim Curry into the celluloid stratosphere. Curry has big platforms to fill, but Webb slips into them with ease. Sensuous, sinister, and seductive, he’s a negligée-d enigma. Masculine, feminine, beautiful, scary: Frank is at the intersection of it all, and nowhere is that better showcased than in Webb’s explosive entrance: “Sweet Transvestite”. From the moment he stepped through the smoke like a demented, diamanté-d Dracula, he had everyone in attendance trembling with antici… pation.

Since his Strictly win, Oduba has proven himself a force to be reckoned with on the stage, moving effortlessly between cutesy doo-wops (“Dammit, Janet!”) and emotive ballads (“Once in a While”). Flaherty is hilariously nervy and nerdy as the vestal Janet, before enthusiastically wooing Ben Westhead’s Rocky (wearing nothing but Speedos and a smile) with the absolute banger that is “Touch-a, Touch-a, Touch-a, Touch Me”. But there’s nothing that touches the gorgeous majesty of “The Time Warp”, which has the ensemble and the audience alike bopping about in harmony.

Everyone looks like they’re having a ball. Stefania Du Toit (stepping in for Lauren Ingram) is perfect as Columbia, the helium-voiced henchwoman with a heart as gold as her top hat. Equally impressive is Suzie McAdam as Magenta, a simmering flame of charisma with a voice like bourbon on the rocks. Kristian Lavercombe plays her brother Riff Raff, an Igor-like acolyte of Frank’s. Lavercombe moves like an unravelling accordion, all sinewy deference and devilry in a performance of which Richard O’Brien himself would be proud. Joe Allen plays Eddie, a role originated by the dearly-departed Meat Loaf. Eddie only lasts for a single song, but if your number’s up, make sure that number’s “Hot Patootie – Bless My Soul”, a rock ‘n’ roll riot that Allen absolutely kills. He also plays the Strangelove-esque Dr Scott (or should that be, Dr Von Scott?) to hilarious results. And Reece Bundin, Jordan Fox, Darcy Finden, Rachel Grundy and Danny Knott are Phantoms so magnificent they put the Opera Ghost to shame.

The plot might be slight but Rocky Horror isn’t about story as much as it is about pure, magnificent madness. Our steward through the madcap melee is Philip Franks, a stalwart of British stage and screen, who has played Rocky’s indomitable Narrator since 2012. He’s the human embodiment of the ‘Keep Calm and Carry On’ slogan; unfazed and unflappable, his beleaguered MC fields obscenities and interjections flung at him from the crowd – something for which Rocky Horror is legend. This is a show that’s performed as much by the audience as it is by the cast – and you might well see as many Columbias, Franks and Magentas in the stalls as you will on the stage.

Framed by a swirl of film reel, Hugh Durrant’s set transitions from 50s kitsch to Gothic camp – its mansion set looks as if Gaston bought the Moulin Rouge – and climaxes in a waterfall of crimson tinsel through which the characters, all dressed in identical scarlet corsets, emerge as their true selves. Sue Blane’s costumes are dead ringers for the ones donned by Curry and co. (and even improve on them on in some instances), and the live band, led by musical director Charles Ingles (stepping in for Greg Arrowsmith), really puts the “rock” in Rocky Horror.

Rocky Horror is a love letter to schlocky sci-fi B-movies and pretty ditties from the 50s (opening song, “Science Fiction/Double Feature”, has never sounded so beautiful or so poignant) – but most of all it’s a paean to self-expression; a fearless celebration of queer joy that implores us, “Don’t dream it, be it”. In Rocky Horror, everyone belongs. No-one is thrown away – even if they’re chainsaw-ed to death offscreen. It’s a ripped fishnets and smudged lipstick kind of a show; glamorous, rebellious, and racy, it’s not so much camp as it is a whole glampsite. Hot Patootie, Bless my Soul – you’ll really love that Rocky Show!