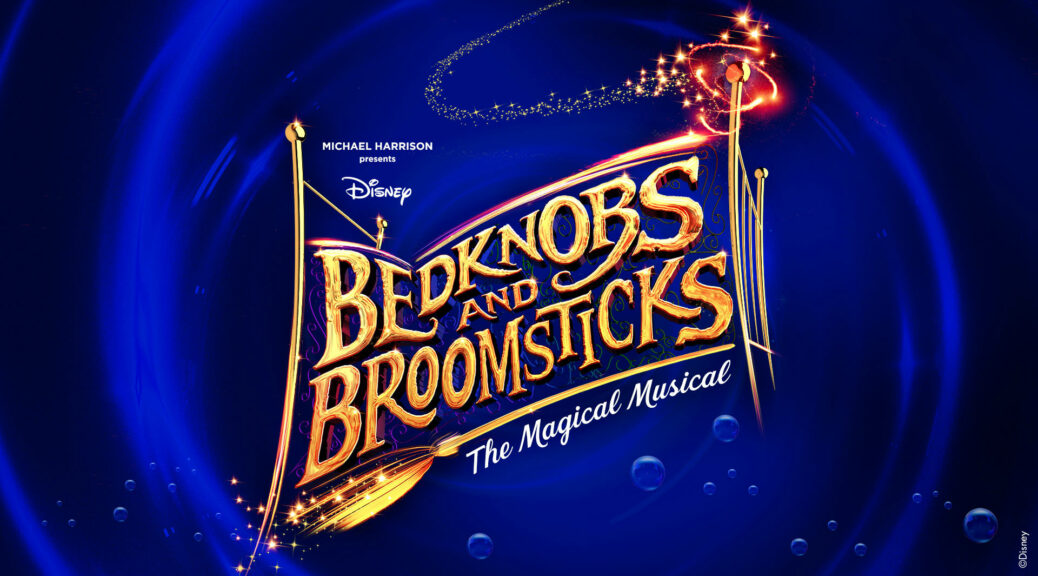 The Millennium Centre is back with a boom – or should that be ‘broom’? – as the UK Tour of Bedknobs and Broomsticks sweeps through Cardiff this week. Based on the Disney classic and featuring original songs by the Sherman Brothers (Mary Poppins, Chitty Chitty Bang Bang), with new music and lyrics by Neil Bartram, the ambitious production has the unenviable task of making its COVID-weary audience believe in magic again – and I’m thrilled to say it succeeds.

London, 1940: as World War II rages, the Rawlins children are tragically orphaned in the Blitz. Evacuated to the Dorset coast, they are assigned a new guardian: the eccentric Eglantine Price (Dianne Pilkington), a reclusive woman with a penchant for motorbikes and, they soon learn, magic. You see, Eglantine is a trainee witch, and she wants to use her powers to defeat the enemy – until she receives word that her witchcraft academy has suddenly shut up shop with her studies incomplete and a crucial spell unfinished. Armed with the titular bed(knobs) and broomstick(s), Eglantine and the Rawlinses travel back to London to complete the spell with the aid of Eglantine’s erstwhile educator, Professor Emelius Browne (Charles Brunton).

That’s a lot of set up for a story with a comparatively slender plot and a whole lot of animated sequences to translate into live action – but the creative team are more than up to the task. Jauntily directed by award-winning theatre-makers Candice Edmunds and Jamie Harrison, writer Brian Hill updates the original by adding much-needed characterization and depth to the unlikely quintet. West End star Dianne Pilkington leads an incredible ensemble with wit and whimsicality, channeling the legendary Angela Lansbury while putting her own instantly-iconic spin on the character. She brings a brusque charm and a delightful physicality to the role, and convincingly grows fond of her wayward wards without losing her edge. Her chemistry with Charles Brunton as the relentlessly lovable conman ‘Professor’ Browne is enchanting, and the odd couple has more time here than in the movie to get to know each other, making their romance more believable. And, on the strength of their performances here, the actors who play the Rawlinses (different each night, except for Conor O’Hara as Charlie), all have excellent careers ahead of them.

The show’s premier prestidigitator is Jamie Harrison, who is responsible for the magnificent sets and breathtaking illusions and also co-directs. Short of actual magic, I have no idea how he made beds soar, brooms fly, and brought the beautiful briny to bobbing, brilliant life – Harrison, who was also behind the technical wizardry of Harry Potter and the Cursed Child, has really outdone himself here. I genuinely can’t work out how he did it! His illusions complement Kenneth McLeod’s utterly charming puppets, which evoke everything from shoals of dancing fish and an obsequious bird, to a bashful bear and a literal lion king, not to mention a few human-to-rabbit transformations.

The flying bed takes Eglantine, Emelius and the Rawlinses all over the world, from the sleepy Dorset coast to the raucous London streets to the balmy/barmy island of Nopeepo. The vibrancy of these scenes are enhanced by Gabriella Slade’s costumes (Eglantine’s outfits, sequinned sea-wear and Portobello punk couture are standouts) and Neil Bettles’ choreography (the opening scene is a masterclass in movement). As for the musical numbers, ‘Portobello Road’ is a lively highlight, a carnivalesque spectacle of urban chicanery; and ‘The Beautiful Briny’ is suitably sublime, featuring gorgeous underwater locales and an aquatic dance-off – but there’s no substitute for ‘Substitutiary Locomotion’. If you don’t get chills when Eglantine starts chanting, ‘Treguna Mekoides Trecorum Satis Dee’, then, frankly, you haven’t got a pulse.

The pacing could be a little tighter, and while some of the new songs soar, others are a tad unwieldy. For example, ‘It’s Now’, while excellently performed by Brunton, does exactly the opposite of its title by preventing Emelius from entering the fight – which is exactly what he’s singing about doing! Why are you going into a second verse, Emelius? The Nazis are right behind you!

The ending diverges from the film and is sure to divide audiences too, but it doesn’t lose sight of what the real magic of the story has always been: that being with the ones you love is always an adventure. Well, that and a flying four poster… Spellbinding fun for the whole family, take a step in the right direction and catch this show while you can – you’ll beWITCHED, beDAZZLED, and be-CRAZY to miss it!