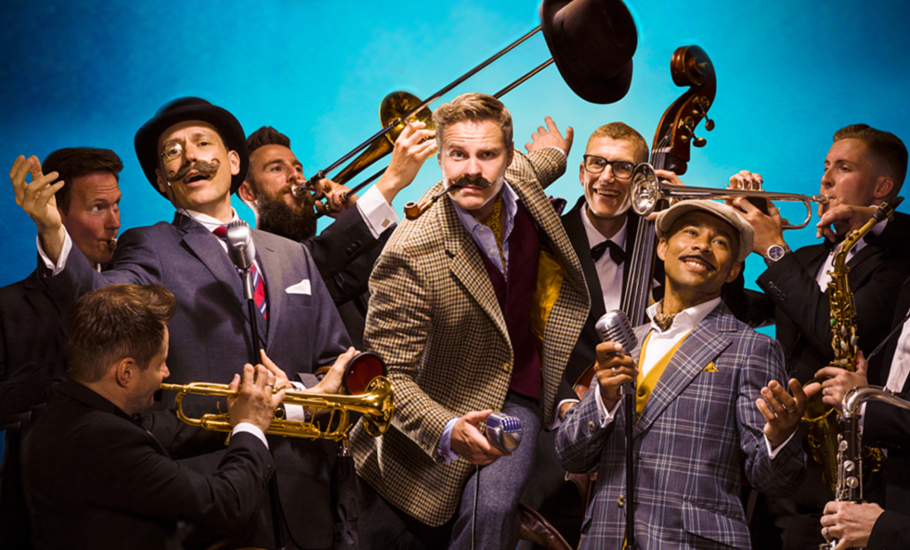 Being a regular visitor of Theatr Clwyd and knowing that most of their shows sell out, especially one nighters such as this, it was disappointing to see the auditorium not even half full for this performance. The surge over the winter months of the Omicron variant coupled with the fact that a production paying homage to the great crooners was always going to attract an older audience possibly being to blame. The cast even drew attention to this during their performance, joking that some audience members had come dressed as chairs! Still, a small audience didn’t mean a quiet audience and the cast soon had everyone singing, dancing and laughing along on what must’ve been a momentous and quite emotional occasion for them, it being their first outing in two years due to the pandemic; the poignancy of this highlighted in their finale number The Curtain Falls which includes the lyrics ‘people say I was made for this, nothin’ else would I trade for this, and just think I get paid for this’.

The Crooners is an eclectic mix of big band classics, hilarious physical comedy, tap dancing and lashings of quintessential Britishness with a story that runs throughout; that of the endangered crooner! The piece opens with the three main characters Rupert, Charlie and Winston sat on chairs holding up newspapers headlining the extinction of the crooner and it’s their mission to find a ‘mate’ this evening (cue plenty of audience interaction, especially if you happen to be sat in the first few rows!) The set is filled with ‘pipe smoke’, the décor is simple with two striking chandeliers donning the ceiling and we are immediately introduced to the incredible Mini Big Band, a 9-piece band including keys, double bass, drums, saxophone, trombones, trumpets and even the occasional jazz flute! And what a talented bunch of guys they are; switching between instruments, involving themselves in the production’s comedy skits and playing a huge repertoire of big band numbers including The Lady is a Tramp, When You’re Smiling, Beyond the Sea, Mack the Knife, and a whole lot more! The band never misses a beat and travel seamlessly from song to song. However, they are unfortunately, on occasion, louder than the cast, meaning we miss some of the fantastic vocals and lyrics.

The moustache seems to be The Crooners’ trademark; it is part of their logo along with a monocle and bowtie, it appears on their on-stage sign, lit up above the band and all three characters wear fake moustaches throughout the performance, with Rupert also wearing a bowler hat and monocle, looking more like the Monopoly man or Poirot than a crooner! It was obvious the cast were going for a typical old-British feel with posh accents, tea-drinking, and pipe smoking but, for me, this just didn’t reflect the era of the big band crooner, which we usually associate with Americans such as Bing Crosby, Frank Sinatra, Dean Martin etc. It was often difficult to see past the costume choices and moustaches and although the fake moustache falling off is funny once, it eventually becomes a distraction and takes away from the skilful performances of the piece.

The comedy throughout the production goes down a storm with the audience and is more risqué than I perhaps expected with sexual innuendos, raunchy costume changes and racy one-liners, all brilliantly funny but kept child friendly. Extremely witty, hats off to script writer Roman Marek who has found a perfect balance between side-splitting comedy and the nostalgia of the era. His physical comedy on stage must also be applauded and his cast mates are the perfect foils. Often the leader of the piece can go over the top with their performance, but Marek knows exactly how and when to begin and end! Tim Harwood and Jim Whitley’s characters have a contrasting calming effect, and both have beautiful tones, whether speaking or singing, which set off the musical numbers perfectly.

Highlights of the show include the introduction of tap dance with the wonderful Choreography (‘chaps who did taps, aren’t tapping anymore, they’re doing choreography!’), Mr Bojangles (both performed wonderfully by Jim Whitley) and L.O.V.E in which we are required to participate by making the letter shapes with our arms (great fun!). But the performance lifts whenever the three sing together; the power of their voices combined is magnificent and the harmonies are stunning making it obvious why the classic crooners are their inspiration of choice.

This show is like nothing I’ve seen before; its unique mix of big band music, comedy and audience participation is superb, and I left the theatre feeling thoroughly entertained! My sides hurt from laughing and I was singing the tunes on the drive home and beyond! I would highly recommend The Crooners to theatregoers of any age. You don’t necessarily need a love or knowledge of the music or of the era; although I’m sure this adds to the experience, the songs, the comedy and the cast could be appreciated whether you’re a fan of Ol’ Blue Eyes or not!

The Crooners continues its UK Tour on February 11th at Cast in Doncaster and finishes on October 28th at Tyne Theatre and Opera House. Head to their website to book your tickets: