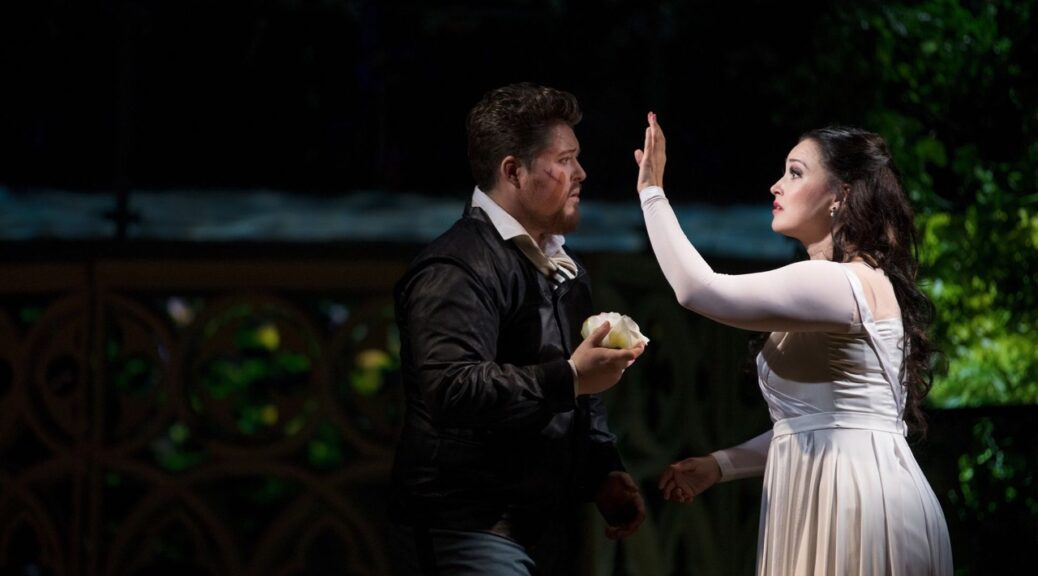 Thank goodness for Opera Vision! Throughout lockdown their YouTube channel has screened a wide selection of international opera. This has been a well of resources at this time and I found myself drinking in its heady properties. It’s a well curated pick ‘n’ mix of treats, something for all tastes.

Iolanta, Tchaikovsky’s last opera (and a slight one at that), is now seen again in the Swedish capital since 1893, the year after its premier in St. Petersburg. One can understand the reasons why, but debate over Russian opera is the subject of a bigger discussion.

In this new production, Director Sergey Novikov is trying to tackle themes of an internet culture, with variable success. The greenery of Provence seeps through the truth and lies of this internet generation themed production. Characters taking a selfie and the use of phones does not add to the mood of the story nor enhance the production, mostly set in Aleksandr Vysotskaya’s plush, gothic garden. Watching online, you pick up on a clunky feel with some of the scenes, especially with the use of the chorus members, who excel in their roles but not in their blocking.

Video work by Dmitrij Ivanchenko represents both security cameras and a giant phone. The typical shots of a lingering set of eyes feel apt to the themes of the story and more of this could have emboldened the atmosphere. The formal, monochromatic costumes of Mariya Vysotskaya feel like they have some historical weight, although without a defined period. Let’s not forget the sun-kissed youths who seem to be off to the beach, for some reason.

You can feel the rugged energy emanating from conductor John Fiore, although the cameras recording the production are rarely on him. The Royal Swedish Orchestra kept up gracefully with the dynamics of the story, rich in lush double harp and sincere, reedy woodwind. For me, there is no real standout moment from the opera, even if two arias and a duet can be considered as highlights.

Some problematic elements still linger concerning staging this opera. The lead role is a blind character and thus debate concerning who should be playing her. The “blind acting” of Olga Shcheglova might be considered dated by many, although her portrayal of the title character is one of the most appealing aspects of the production. Locked away, kept from knowing how her blindness debilitates her, Shcheglova plays Iolanta with a naïvety and fragility. It’s everything you’d want the part to be. Like many opera heroines, so many decisions are made for her, without any consent.

Perhaps the most shocking moment came with the arrival of the Muslim doctor Ibn-Hakia, a “brown-faced” Dmitry Yankovsky. Taking on board the Continent’s polarised stance of “black-face”, this still is a jarring sight. Despite this, I would say Yankovsky sings with a fiery, harsh intensity for this vital role (he somehow cures Iolanta, so she can finally see).

King René is played by Stanislav Shvets, who plays the intimidation card well. The command in his voice is what makes such Russian singing so mesmerising. He is not on stage enough. Robert, Duke of Burgundy is not an essential character, his role only to be there as an arranged groom for our leading lady, in an agreement made years past. Yet, in the role, Konstantin Brzhinskiy seems to enjoy time on stage with bravado, impressive in tone and feeling. Nursemaid Martha from Klementina Savnik is deeply perfumed and a fascinating, brief sound to hear of which I wanted more.

However, the show belongs to a masterful Igor Morozov as Iolanta’s “saviour”, from Greve Vaudémont. Not only does he get the princess, but our praises. The intense moments in the fourth and final scene, where you assume tragedy will strike, standout.

The streaming of the production was not without fault. The English subtitles occasionally did not indicate that two people were singing simultaneously. Although we have these videos online for a few months, perhaps a whole year would be invaluable. It’s what we all need at this time.