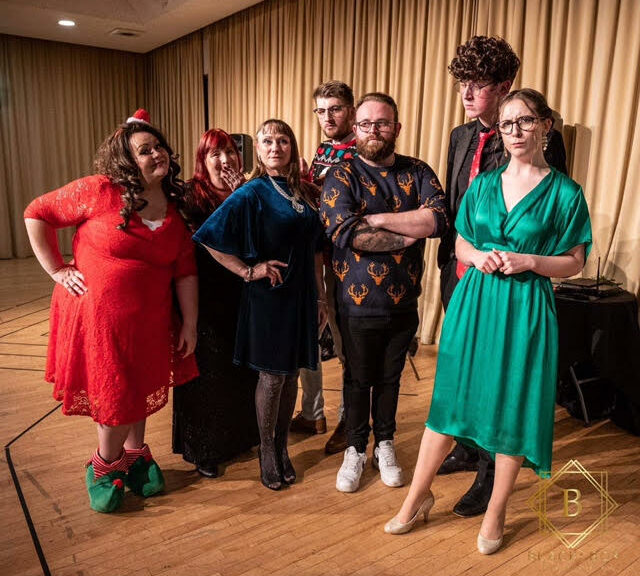 Black Box Events, set up by Denbigh born Mark Hughes, specialise in unique events and entertainment across North Wales. Since its creation in 2019, the company have provided a variety of successful events across a number of different venues in the region. Mark initially started hosting murder mystery events back in 2017 as fundraisers for varying causes and enjoyed it so much he decided to turn it into a part time job! All Black Box’s actors either have professional training or a wealth of experience in performing and this was certainly made clear throughout their latest production Murder Under the Mistletoe at Theatr Clwyd.

On entering the Clwyd Room at the venue, we are greeted with what looks like an office party set up; lots of tables boasting beautiful festive centrepieces, a makeshift bar (with a free glass of wine included on entry…I like this office party already!) and Christmas tunes playing through the speakers. There is even an office Santa making his rounds. The only giveaway that this is not your average office party is a notebook and pen atop the table for scribbling down clues and musings, and a QR code (how modern!) which, when scanned, takes us to a set of character profiles, giving us an insight into the characters we will be meeting this evening. And before we know it, those characters are in the room, chatting, not only amongst themselves but to us, transporting us to their office party and making us included in their company. That company being TechQ. The company director, Jackie, has seemingly thrown us all this party to celebrate such a successful year. Although we already start to get a glimpse that something is not quite right as the characters begin to bicker, throw looks at each other and, as is somewhat expected from a murder mystery evening, one goes and pops their clogs. And it just happens that Inspector Beckett is attending the party and so begins the fun! The inspector duly lines up the culprits ‘on stage’ and we start to learn a bit more about them. After this, it is our turn to interrogate and so ensues a hilarious back and forth between the inspector, the audience, and the characters, all of whom are portrayed brilliantly throughout and, even more impressively, the company improvise most of the piece. As the audience interaction heightens it is wonderful to look around the room and see audience members get so involved: writing in their notebooks, chatting to their friends and family about who they think’s ‘dunnit’ and even turning to guests on other tables and comparing clues! Towards the end, the audience must put on their ‘Sherlock’ heads and decide who they think did it! There is even a prize for the correct guess!

Despite it being ‘murder most horrid,’ this truly was a festive evening; we were even treated to a few Christmas numbers by the boss’ PA as well as her son! All music, sound, props etc. were organised by the cast super slickly and each character had their own clear aesthetic and personality; often stereotyped but not too over the top. There was plenty of dark drama from Jackie and her family, perfectly balanced by some wonderful comedy moments from Jackie’s PA, Josie…and Edward’s wig! The action was not without excitement but there were also a few interludes where the characters left the ‘stage’ and the audience were able to take toilet breaks, purchase another drink and/or discuss the goings on at TechQ! The company even stayed behind at the end of the performance to talk to the audience and take photos with them-a lovely gesture.

Black Box can cater for a wide variety of events including weddings, parties, corporate or even nights in with friends! They can hire out singing waiters, flash mob choirs and even a cinema screen/projector; bringing the magic of the movies into your home (something which went down a storm over lockdown!) And in 2022, Black Box will be hosting their murder mysteries all over North Wales so make sure to keep an eye on their social media channels for ticket info!

You can find them on Facebook and Instagram (just search for Black Box Events North Wales), or you can give Mark a call on 07748 747209 to start organising your personalised event!