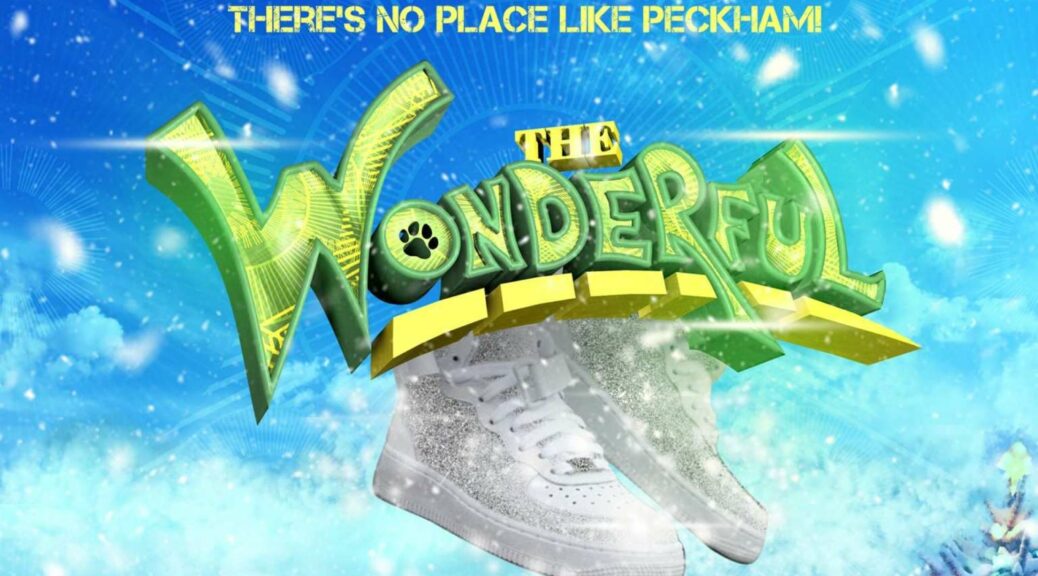 In the heart of Peckham, Theatre Peckham showcased ‘The Wonderful – there’s no place like Peckham’. Prior to the show, Theatre Peckham kicked off in festive spirit style. The atmosphere in the theatre once you’d entered lingered with seasonal warmth from Christmassy smells oozing from moist raisons in delicious mince pies, citrusy bursts from mulled wine, fizz bubbling Prosecco, orange juice and original home-made Kromati rum.

The set designer; Emma Wee made good impressions from the get go! As soon as you walked in to Theatre Peckham you were greeted by the fantasy realm, the designs won the hearts of both children and adults due to the familiar elements from memory lane from our beloved musicals; such as the yellow brick road from the Wizard of OZ, which lead the audience up the staircase to see the show.

‘The Wonderful’ is a vibrant unique pantomime production, wonderfully infused with great concepts inspired by ‘Black Panther’ & the ‘Wizard of OZ’. ‘THE WONDERFUL’ is a modern twist of fanatical & mystical fairy tales guaranteed to offer vibrancy that’ll stimulate enough laughter to keep you wanting more!

‘The Wonderful’ features a modernised twist of Afrofuturism where an unstoppable crew expanded on the pros & cons of how Artificial intelligence feels from a non-existent soul, (Cyri) played by ‘Amy Bianchi’, social media (Tik Tok) played in the form of a dog by ‘Sebastian Chambers’, technology, Pinky without the brain ‘Manny’ played by ‘Billy Lynch’ and the evil forces in the midsts of realty & fantasy from villain ‘AyGum’ played by ‘Tarisha Rommick’ and the sensation & importance of community from the fellow cast.

The moral of this production was that irrespective of personal missions, challenges are inevitable, however in spite of disasters there is always hope to allow us to overcome. Greatly presented by the main character ‘Efe’ played by Ashleigh Mae, who achieved and accomplished her pursuit of happiness from clarity to realisation within the fantasy world, which prepared her for the physical conscious realm back home in Peckham. Transpiring from the realistic elements experienced in households where we tend to feel misunderstood & unheard at times.

‘The Wonderful’ featured not only local talent but fun, upbeat and enchanting talent from the young company dance team. Having the presence of children in this play exuded a youthful experience which made this play even more worthwhile to watch and enjoy.

‘The Wonderful’ is a true magical reflection sprung to life, this production takes each audience member on an unforgettable adventure. Each character sparkled mystical stardust of optimism, laughter and the feelings of hope. The modern spin of the ‘Wizard of OZ’ & ‘Black Panther’ provided exceptional strengths that alienated distorted weaknesses from each character- highlighted by the hilarious & wacky character ‘The Wonderful’- played by ‘Ray Emmet’.

From magic machinery, dazzling flashing lights displayed on the multi- colourful set, dance, spice & everything nice, sass and so much more… the passion, music and entertainment expressed from all of the above is enough to keep you wide awake throughout!