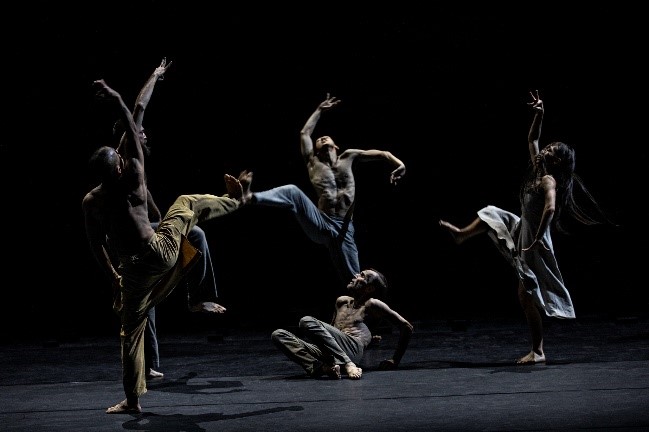 Akram Khan is always on the lips of anyone who I speak to regarding dance. I’ve always missed out on their shows and been gutted by this. The fusion of traditional dance with contemporary, exploring the limits of the body has massively interested me and so I was greatly excited to finally see this company.

And by God, am I glad I did. From start to finish, I couldn’t take my eyes off the stage. Suspended into darkness, no one else was there but me and the dancers as they told a ancient tale through physicality.

Outwitting the Devil derives its narrative from the Mesopotamian tale of Giglamesh – The Gods punish King Giglamesh for destroying the cedar forest and killing its guardian. They kill his friend, a tamed wild man. Soon realising the truth about life and mortality, he fades away into memory and history.

What instantly made me appreciate this piece the most was the difference in performers – different race, cultures, ages and gender are represented, highlighting the westernised process of dance, merging into traditional Indian dance, to generally contorting and throwing their bodies. Khan mentions in an interview in the programme that he wanted to ensure that older performers are more represented, and I am in awe at what is possible by any body. This was only a small detail at the beginning, when I forgot about the outside world and was fully in this story – ages, gender, race, shouldn’t be a point and it certainly wasn’t in telling the story of life. A story that any culture could relate to. And by being told through dance, it of course gives way to allowing any audience to interpret their own story.

The aesthetic was dark, it was earthy, it was primitive, animalistic but also contrasting with robotic movements, as if they were being controlled, with classical and instrumental music being juxtaposed by electronic sounds. The movement, sound and change of story kept us on our toes, and almost made you want to look away in case it made you jump, but like a thriller or horror, you still want to watch despite this.

As expected, the movements and dance itself are just breath taking. Fluid, yet silent, all the performers move across the stage with such grace and silence – they interact with one another and defy gravity and science with how they move their bodies and use the space. It is enticing and I’m pretty sure I forgot to blink.

Outwitting The Devil is absolutely incredible, mesmerizing and moving beyond anything I have seen before. This is dance, and dance at its most perfect state.