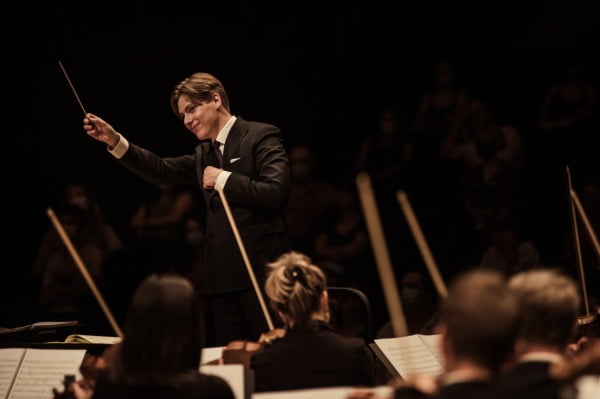 In this first trip back to London, I’ve found a lot of the mood being quite dream like. I’ve covered a lot and seen the sites. In this final evening, I returned to the Southbank Centre for the first time since March 2020. The London Philharmonic Orchestra and their outreach programme with Crisis Creates played their hearts out in this mid week night of music.

The First Impressions set from Crisis helps to get homeless people from across the UK back on their feet. Through music they have united people to find joy in it and giving them a proper introduction to the performance space. Workshop leader Aga Serugo-Lugo had made wonders with the diverse group of characters who surprised and delighted the fair ones who attended. One male singer had some very interesting pipes and there was a charming ramshackle vibe to the few pieces they’ve been working on for days. They had been inspired by the programme from LPO to follow, though that may not have been obvious aside from the trumpet player mimicking the Debussy Prélude flute opener. Thinking about the way the arts has been effected, more work like this can only make the future more clearer. Well done to all involved.

Following on was LPO in an all French night. Olivier Messiaen’s Les offrandes oubliées is an early orchestral work and one of note. The markings of his later outrageous and sublimely moving fittings can be heard in and around a piece like this. The strings standout for their agonised entry and departure, framing the piece in an never forgotten glow. The percussion and brass also get their moment in the middle section, full of swipes and jabs, a mostly violent affair and never ceasing to be sensational.

Our concerto for the night was with cellist Truls Mørk and Saint-Saëns. In his 1st Cello Concerto, I have to admit it does not do a lot for me. There where some strange little moments with the strings feeling quite mischievous, as Mørk seemed pious in his formation. There is charm and grace, but it never stands out. Mørk was quite serious but the playing was what every cells should aspire to. An unknown encore to my ear continued the serious tone in a lot of feeling, the hall quite still for the minutes with him alone.

A second half was purely Debussy. His Prélude à l’après-midi d’un faune feature the famous flute solo and conductor Klaus Mäkelä was in no hurry in letting the work start in it’s own evocative and sensual way. It’s a perfumed dip into the lovely waters, orchestrated with a fine nuance, never really stoping for anything. La mer is another testament to Debussy’s talents, though I do find my attention is compromised whilst listening. Some shining moments come through, the waves and storms which calm down only to arrive back later make this  fine example of how to composer music about water and the sea in an impressionistic manner, not like Wagner nor Britten who also excelled at sea-inspired scores. Mäkelä seems to be the a beacon of energy, seeming to lose himself in a few moments during the evening. More of this vigour is encouraged.