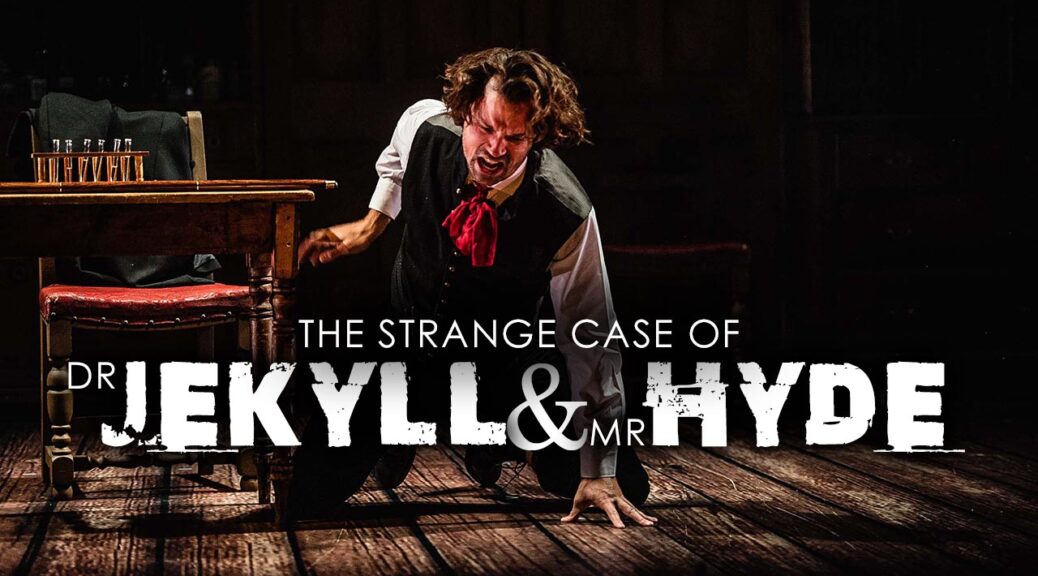 If a potion could make you into your best self, would you take it? What if it came with a cost: a little less empathy here, a little more aggression there, would you still make that choice? The tale of a good man hiding the dark side within has captured audiences ever since Robert Louis Stevenson published his most (in)famous work, Strange Case of Dr Jekyll and Mr Hyde, in 1886. 135 years later, and we’re still telling the same story, and now Blackeyed Theatre have staged a bold new version which opened at the New Theatre last night.

Written and directed by Nick Lane, the story follows Dr Henry Jekyll (Blake Kubena), a respected scientist on the verge of a neurological breakthrough. His friends and colleagues condemn his dubious methods, but a potential romance might just bring out the best in him – if the worst doesn’t beat him to it. I don’t just love the original, I literally wrote the book on it (well, the PhD, anyway) – so you can understand my excitement at finally seeing a stage version come to Cardiff. And it was well worth the wait. The company live streamed an earlier version in September 2020, but there’s something magical about witnessing these four exceptional actors play multiple roles (or should that be ‘selves’?) right before your eyes.

Blake Kubena gives a captivating and visceral performance as both Jekyll and Hyde, moving fluidly between the two ‘personalities’. The physical aspects of the role are crafted in collaboration with movement/intimacy director Enric Ortuño, who is also responsible for several stunning slow-motion sequences, especially a (literally) gut-wrenching act one closer that simply has to be seen to be believed. Lane’s adaptation takes the unusual and rewarding route of making Hyde more debonair than the socially awkward Jekyll, and juxtaposing an intelligent but physically weak Jekyll (not unlike Stevenson himself) with a cruel and powerful Hyde makes for enthralling viewing.

Zach Lee plays Jekyll’s friend and lawyer, Gabriel Utterson, as a strait-laced Petrocelli with the fastidiousness of Hercule Poirot. Lee narrates much of the story and excellently grounds the increasingly-eerie action. Paige Round is especially impressive as Eleanor Lanyon, the sole woman in the play: the novel features no named women characters, concerned as it is with masculinity and the aggression and repression tied up within it, but Round crafts a woman as multi-faceted as the titular character, and brings much of the play’s energy and drive. And Ashley Sean-Cook plays Dr Hastie Lanyon, Eleanor’s sweet-natured beau, bringing new layers to Lanyon that make him far more complicated and sympathetic than his literary counterpart.

Moving the action from 1885 to the 1890s edges it closer to the dawn of psychoanalysis which Jekyll anticipated (in an effective opener, the cast first emerge wearing masks and speaking the same overlapping dialogue). Victoria Spearing’s striking set, a row of antique doors and cupboards lit alternately by red and blue, is itself evocatively psychoanalytical. Naomi Gibbs’ costumes brilliantly transport you to turn of the century London, and Lane’s adaptation cleverly draws in themes and parallels from Stevenson’s contemporaries, creating something of a Gothic smorgasbord: this Henry is driven not to let ‘the unjust man go his way and the just another’ but to revolutionise science, much like Victor Frankenstein. His experiments on rats and other animals (including human beings) aligns him not just with Victor but with Dr Moreau, fictional ‘mad’ scientists whose experiments paralleled the rise of vivisection that so engrossed and revolted the delicate sensibilities of Victorian society. A lawyer investigating supernatural goings on in 1897-era London smacks of Dracula – and while the subtextual homoeroticism of the original is relegated to a single saucy reference here, there’s a little of Dorian Gray in this Henry Jekyll, who too falls in love with a rising star of the stage.

Robert Louis Stevenson wasn’t much interested in being a lawyer, but he was fascinated with the criminal mind; what can propel a seemingly ordinary person into doing extraordinary (and extralegal) deeds. The ‘why’ of crime started to rival the ‘how’ in Gothic fiction of the time, which is perhaps why true-crime cases rose in popularity – the case of William Brodie, a Edinburgh clergyman by day, thief and gambler by night, certainly made an impression on Stevenson. The book itself is a split personality: the original was grudgingly burned by Stevenson at the behest of his wife, likely due to sexual or disturbing content – the second (written in less than a week and likely under the influence of controlled substances) is more civil, more sanitized, and yet still managed to push boundaries. Blackeyed Theatre brings both versions of the text together in a gloriously (un)holy union here.

Blackeyed Theatre have perfected the formula of adapting classic literature to be taught in schools in accessible and lively ways. Their version of Jekyll and Hyde is an absorbing, immersive and exciting adaptation that does justice to the original while forging its own path. It could be a little tighter, especially in the first act, and the switch between the characters’ perspectives can make the timeline a touch confusing – but the latter serves to reinforce the theme of fractured subjectivity. Whether you’re familiar with the original or just its central duo, Blackeyed Theatre’s adaptation will take you on a riveting journey. And it leaves us, as life always does, with a choice: to take the easy road or the hard. It calls us to question why we keep telling the tale of Henry Jekyll and Edward Hyde over and over when we should really be looking into a mirror. What will you see if you do? And what if the mask is the mirror?

The Strange Case of Dr Jekyll & Mr Hyde is playing at the New Theatre Cardiff through Saturday 13 November.