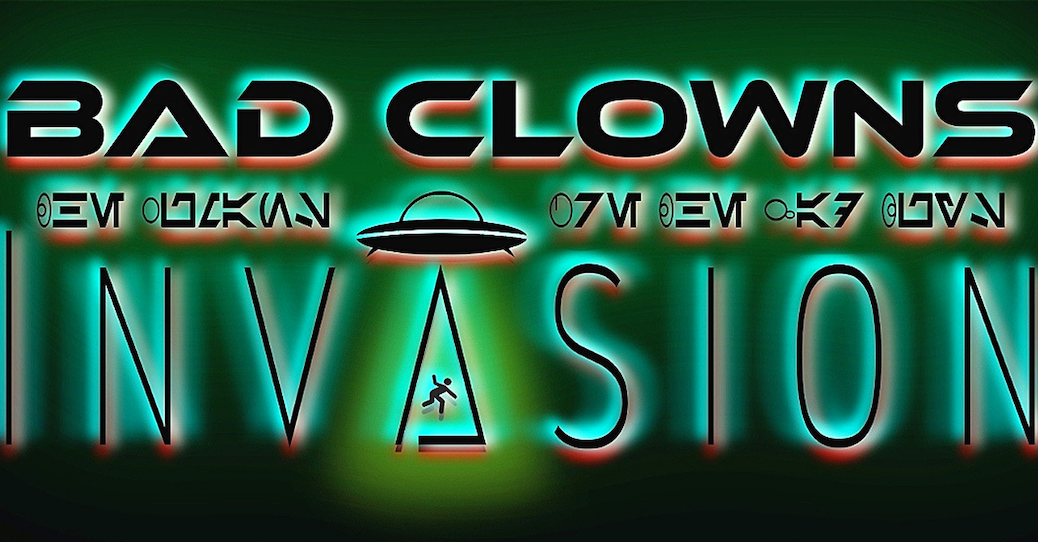 Take Men in Black. Set it in England. Add some bumbling comedy buffoons and what do you get? Invasion by Bad Clowns Comedy.

Filmed exclusively for reviewers, Bad Clowns Comedy have nicely given us a good quality recording of their show at the Rose Theatre, Kingston. Filmed with different angles and great sound recording, it is one of the best recordings over the past year of Covid that I have seen.

If you were to imagine Men in Black set and written by the British, this would be it. The character’s fumble around, they’re not sure what they are doing, to some degree it could be seen as a spoof. It reminds me much of Simon Pegg and Nick Frost if they brought their films or even their show, Spaced, to the stage. It reminds me also of when Ant and Dec ventured on the film Alien Autopsy, when the narrative is meant to be spooky and serious, but in true British Comedy style, is a comedy of itself. If Ade Edmondson and Rik Mayall decided to make a Sci-Fi theatre show for Bottom, this is what it would be.

Each character has its own flaws – Sam’s character is stars truck by his commanding officer, but lacks common sense and this leads to hilarious errors. Christian is the smarter of the two but exasperated by Sam and still, finds ways to be inadequate as a Special Agent himself. John is the commanding officer, who encompasses both Sam and Christian’s traits, and for sure, should not be a captain – hilariously finding ridiculous ways to stop a bomb, to engage with the set, the characters, the narrative. If this was true life, it would be one hilarious worry.

The three performers bounce off one another and the audience well. When there is the odd mistake or a heckle, they are quick to react and incorporate it into the performance. It only adds to the hilarity. They engage with the audience, using their responses and heckles to incorporate and help the narrative. They address them the entire time and so there is no escape, but makes you feel part of an exclusive club.

Adding multi-media in the form of a large presentation screen, recorded voices with Sci-Fi style orders, they effortlessly pick up on the quintessential elements of known Sci-Fi, from films, tv shows, games as well as British Culture. Some being well known dances that we all followed at school discos, the presentation of pop ups on a computer screen from way back when, with the correct noises and the use of brain control with helmets often seen in Sci-Fi films. It allows us to spot and identify with these parts and shows their intricate research and well written production.

A wonderful part of this production is that they clearly enjoy what they do and are very skilled in improv and going with the flow of the performance. Times where they could corpse or it’s on the verge of this, is still so professionally done and fits… like it was always meant to happen.

Invasion by Bad Clowns, is a hilarious and very British Sci-Fi Comedy production which anyone, whether into this genre or not, would find themselves laughing out loud at.