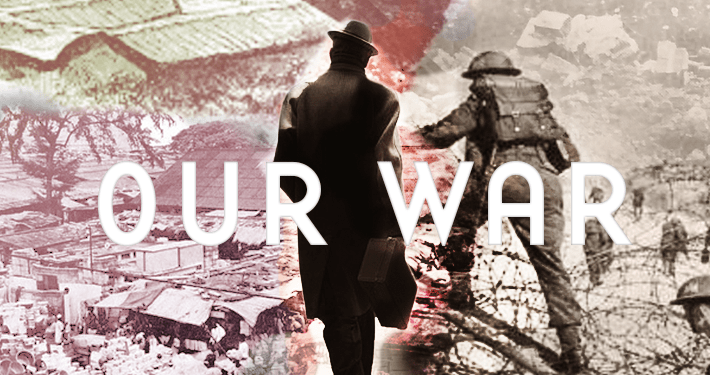 ‘Our War’ is directed by Andrew Ashaye & produced by Imole Theatre Company (Lola Oteh). Our War is an emotionally compelling story from the lens of the fellow Nigerians Ola, Tommy and Christian, as they travel from their native land Nigeria. Encouraged to partake in World War II as Nigeria at the time was a British colony; which left young men & women feeling as if they had no other choice or say in the matter, just wanting to make their mothers proud. Nigerian men & woman were not only having to leave sunny Nigeria, their families & parents; but the feeling of hope, unknowing whether they’d ever get reunited with their loved ones again. A flight with no guarantee of return, but of the sounds of explosive nuclear bombs, the height of World War II became their history.

After the play, I was keen to speak with Lola Oteh to hear what sparked her interest in the concept of ‘Our War’. Lola mentioned it was when she’d realised the vast absence of African & West Indian soldiers who were not widely acknowledged or recognised in being Britain’s key players fighting for the country.

Once Ola (the nurse), Tommy & Christian arrived to Britain, they experienced the national terror of war on the battlefield and the harsh realities of being Black in the army and in the local community. This entailed not only segregation for the coloured but their uniform differences to.

In conversation with Lola Oteh & Andrew Ashaye after the play, it became clear that Our War came together after an abundance of research from various sources from black cultural archives, etc. was carried out. Where autobiographies, real names, times & untold stories were incorporated into the play to ensure they portrayed life as realistically as possible during that era. Perfectly depicting the characteristics, mindsets & attitude of those in authority as well as the veteran desperately missing their motherland. ‘Our War’ perfectly dramatises the bravery of forgotten heroes, Black African and Caribbean men and women who contributed and made sacrifices for the war effort in Britain.

This production was majestically infused with elements of Nigerian culture through compelling dialogue & sweet singing in Yoruba; penetrating the audience hearts. Lola Oteh’s cultural influence was deeply embedded to create a platform in which original and innovative stories could be told. Drama and performance was greatly used in ‘Our War’ to magnify history bringing the past back to life and giving us a voice to stories that might not always be heard.