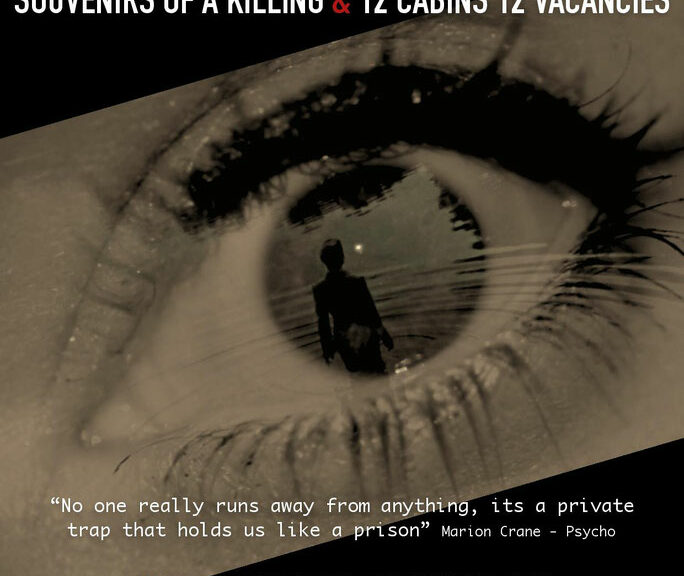 Company of Sirens make a dynamic return to Chapter with Hitchcock Redux, two short plays that explore the elusive power of real (and reel) memories. Written and directed by Chris Durnall and funded by Arts Council of Wales/National Lottery, Hitchcock Redux dramatises and meditates on two traumatic events in Durnall’s life and the Hitchcock films with which are intertwined.

In the first play, Twelve Cabins Twelve Vacancies, Durnall recounts the time when, while watching the first television broadcast of Hitchcock’s Psycho in 1968, he learned that his father had died. The two are forever connected in his consciousness, and memories of both are shaped and distorted by each other. The second play, Souvenirs of a Killing, explores the tragic abduction and murder of a friend in 1973, the trauma of which is embodied and underscored by the film Vertigo. Both plays are performed by Durnall and Angharad Matthews (who also designed the set and costumes), and feature original music composed and performed live by Eren.

Twelve Cabins premiered onstage in 2019, and was performed along with Souvenirs online in March of this year. The lyrical writing and pensive performances resonated even through the screen – but onstage they are brought to vivid, visceral life. The sense of place, space and movement is powerful: Durnall moves as though monumentalised in grief, shifting between joyous reminiscence and solemn contemplation; Matthews moves ethereally, as light dances on the surface of rippling water; and the immersive music, composed and performed live by Eren, moves between original compositions and evocations of Hermann that cage the characters in a spiralling static state.

The women in Psycho and Vertigo are portrayed with more empathy in those films (and in these plays) than Hitchcock showed the actresses portraying them. Women encased in amber, both celluloid and corporeal, are objectified through movies and memories, their losses mourned through the membrane of grief and fiction. Durnall speaks not for them, but through them, their voices reanimated but recounted, living only through scribbled words on cigarette boxes (a subtly gorgeous image).

The set is plaintively sparse, evoking the ways in which the backgrounds of memories are often shadowed, blurred, or absent altogether; sometimes a face, a dress, a glance, is all we remember. Examining a memory can tarnish it, like buffing a broken mirror – it just makes the cracks cut deeper. In a piece for the Wales Art Review, Durnall argues that the (fictional) films and the (real life) losses ‘have become so inextricably linked with those moments that they have become artistic metaphors for the events themselves’. Whether watching scenes play out on a television set, or re-enacting Hitchcock’s dialogue, Psycho and Vertigo become a prism through which grief is reflected and refracted, and provide a kind of closure which is not always found in life.

The search for closure is a sentence which Hitchcock Redux leaves incomplete – purposefully so, because closure is by nature perpetually unfinished. But it also leaves you with the drive not only to explore your own connections between art and grief and memory, but the tools you’ll need along the way. Striking, pensive and poignant, it does not ask you to take the first step – it merely opens the door.

Hitchcock Redux is playing at Chapter through 16 October