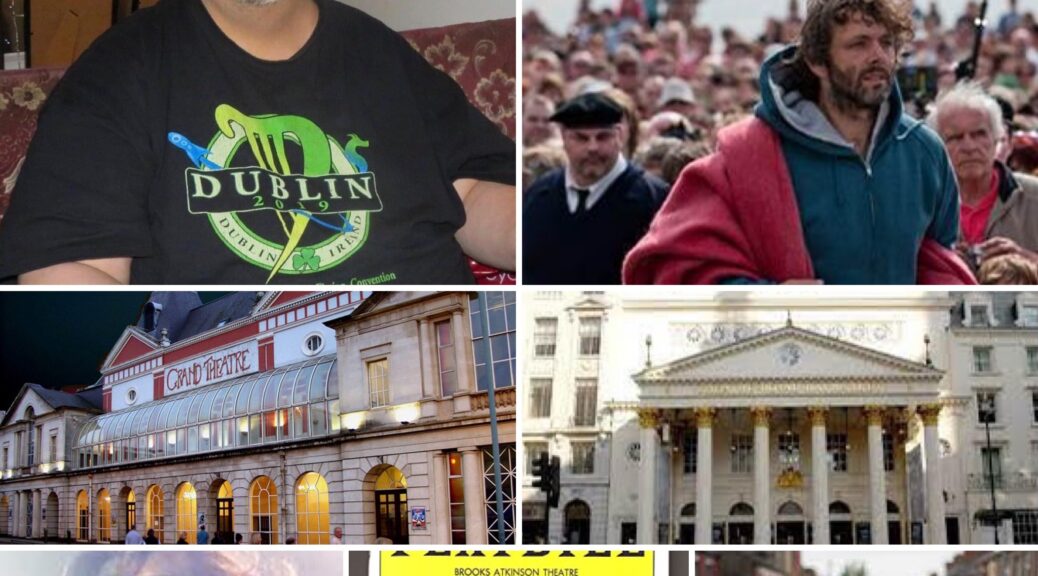 We recently published a new article on the return to physical Theatre performnces. In response to this article Get the Chance critic Kevin Johnson shares Theatre means to him.

Theatre was never part of my life growing up, only books, television, music & cinema, and the nearest one was ten miles away. Then one day I read in a newspaper that Ben Kingsley, who’d just won the Oscar for Gandhi,  was going to do a one-man show in London. For some reason I decided that I wanted to see that. A trip to London back then wasn’t simple, tickets had to be booked either by post or over the phone, months in advance in the days before the internet, and it meant an overnight stay, but luckily I had family there, so at least I didn’t need a hotel. I couldn’t have picked a more intimidating venue for my first play: The Theatre Royal Haymarket is the third oldest in London, built in 1720, and unlike most theatres in the capital which are huddled together in busy streets, it stands alone on a major thoroughfare, giving it plenty of space to be appreciated. This was due to a massive renewal scheme in 1820 sanctioned by the Prince Regent and overseen by architect John Nash. The buildings on either side are painted white, and although not part of the theatre itself they make it look much bigger than it is, while six giant Greco-Roman columns hold up a portico above the door like a temple. Inside it is even more intimidating, with murals on the walls and ceiling, and the main colour throughout is gold.

The Haymarket is on the upper scale of London theatres, both in its appearance, capacity  and in the quality of plays and actors performing there, and this permeates most aspects of the venue. During the interval, for example, as well as drinks from the bar, staff roam around with trays offering small bottles of wine and champagne, and the programmes for the plays are the classiest I have ever seen: the covers are a shiny black with the names picked out in – what else – but gold.

The play was based on the real 19th century actor Edmund Kean, who had also appeared at the Haymarket in his heyday. He was an actor of great renown, both for his talent and also his scandalous lifestyle. The poet Coleridge said that watching Kean act was like “reading Shakespeare by flashes of lightning”, for me, watching Ben Kingsley act was similarly mesmerising. I had always liked comedy, and there was plenty in this play, but what I had never experienced before was the sheer weight of silence, the heaviness of pause that a great actor can bring to a performance.

It wasn’t just me, the whole audience was enthralled, and you really could have heard a pin drop. That was the moment I became fascinated by the theatre, and I still am. It has brought me so many incredible memories over the years.

I was soon a regular at my nearest theatre, the Grand in Swansea, which actually has a bigger capacity than the Haymarket. The ‘Royal’ in its name I later found out meant that the theatre had received a licence from the reigning monarch to perform serious drama, whilst others could only perform lighter plays, comedies and variety.

The Grand has a pedigree too, founded in 1897, and I’ve seen many amazing moments there: Timothy West in Death of a Salesmen holding a whole audience in the palm of his hand. Other great memories include Anthony Hopkins in Pravda at the National Theatre doing an entire play with his voice in a much deeper, gravelly tone than I would have thought possible. His two Oscars notwithstanding, he is one of the finest actors I have ever seen. The National Theatre of Scotland touring with Black Watch at the Barbican, a play about the Scottish Regiment in Iraq, with songs, routines, even a mime, seemed to have everything but the kitchen sink yet was phenomenal, and one of the best live shows I’ve ever seen. Billy Piper in Yerma at the Young Vic, giving one of the greatest portrayals of human pain and the desire to be a mother ever seen onstage: Sophie Melville at the Sherman in Cardiff in Gary Owens’ Iphigenia In Splott, a searing one-woman monologue which put her in direct competition with Billy Piper for the Evening Standard Award.

But ironically the best play I’ve ever seen occurred much closer to home than any of the others, in fact I was even a member of the cast: that was The Passion in Port Talbot. Performed over three days in Easter 2011, it was a passion play with a cast of nearly a thousand locals, a small band of professional actors, and Michael Sheen in the lead. It had an audience of nearly 20,000 in total, plus many more watching online, and was described by the Guardian as ‘one of the outstanding theatrical events not only of this year, but of the decade’. Sheen co-directed it with Bill Mitchell of Cornish company Wildworks, and they did an award-winning job. Written by Welsh poet Owen Sheers, it was simultaneously filmed as ‘The Gospel of Us’.

So if you haven’t already, give theatre a try, you may be as pleasantly surprised as I was and it could lead to a lifetime of great memories.

Get the Chance supports the public to access a world of cultural provision. We receive no ongoing, external funding. If you can support our work please donate here. All and any contributions are greatly received, thank you.