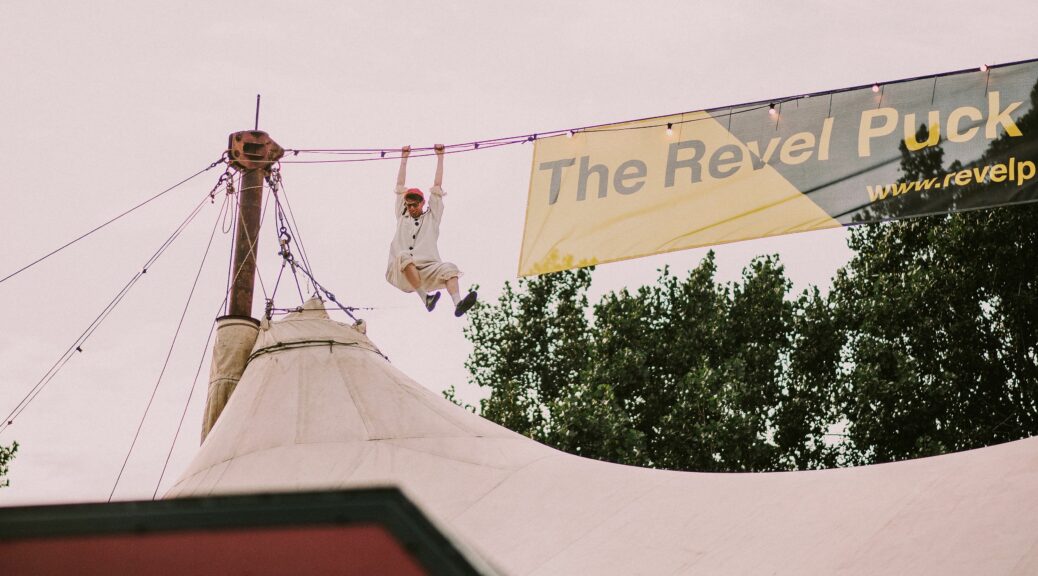 It’s been a while since many of us were in a big top, and I for sure missed the element of being in a field, walking into a giant tent and being wowed from start to finish.

The Wing Scuffle Spectacular takes the elements of fear and laughs in the face of it. Along with what we all expect – spectacular stunts, comedy and those ooh and ahh moments, there is also a narrative where the performers face danger but really, there is no real danger. For example, flawless rope acrobatics over broken glass has its illusion shattered (pardon the pun) when the performer stands on them on the end and it isn’t really glass. Despite these illusions being dropped cleverly, we never expect it as they intertwine this will real death defying stunts. There’s a comedy to it when your heart is in your throat and suddenly it is all a farce – Revel Puck are showing us to face our fears and make light of the danger.

Traditional Circus is always in play when we have our resident clown bringing the comedy between each stunt, with his own talented tricks and skills. He has his own narrative – a budding friendship between him and the… Lion! Don’t worry, there’s no real animal here but the development of a stuffed toy that gradually gets bigger throughout the show. From terrorising him, to becoming friends, to a romance, the clown and the Lion made the children and adults alike scream with laughter.

What I love about Circus is that the tricks and stunts tend to be similar or on the same path, but the way they are executed along with the narrative is what really makes it. And this troupe certainly bring their own performance, comedy and personalities which really adds to the general theme.

The only elements that felt awkward and with a need to fill were times when there was no silence or dialogue. It felt, well, a little static – some I could see the reason behind it, to create some tension, but I think with children in the audience still making noise, it lost this atmosphere and felt like we were intruding as they set up or began a trick, or even when they were performing; as if we walked into their warm up or training session.

Overall, I had SUCH a brilliant time at The Revel Puck Circus. It felt light, it felt fun, it felt normal and felt so good to be back seeing Circus performance again. The Wing Scuffle Spectacular has something for all ages, keeping to the tradition of Circus but bringing a youthful and unique take on it.