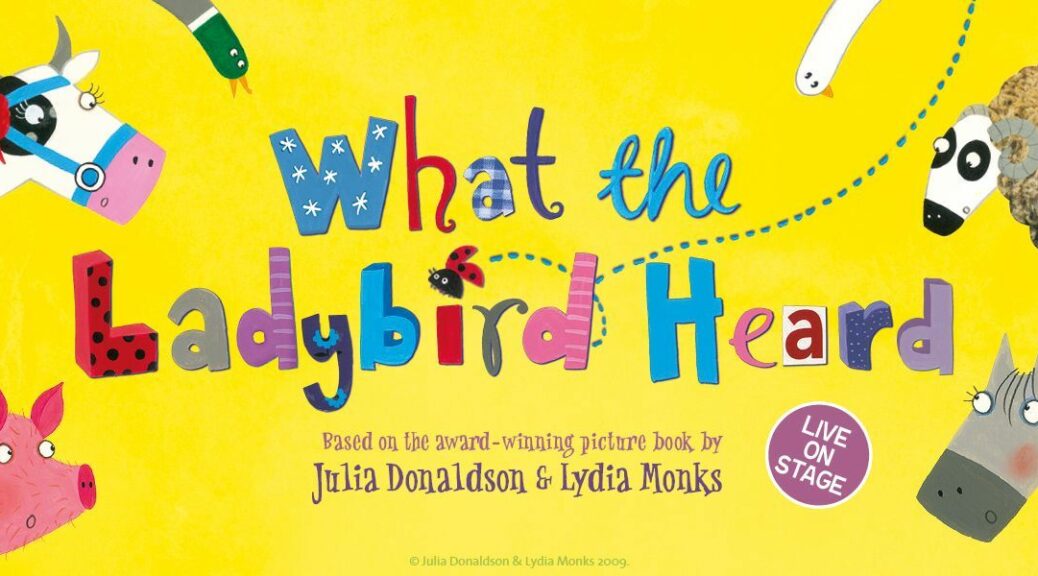 The best critic for a children’s show, are the children themselves. I was lucky enough to take my 3 year old nephew, an avid reader and Julia Donaldson fan, to see What The Ladybird Heard at the West End located, Palace Theatre.

Walking up to the theatre, the original book in his bag, he pointed out the poster on the outside in complete excitement. A rainbow ballooned archway was set up for the queue and ticket check, and straight into the auditorium, the stage was set out already ready for our viewing. His eyes were wide and so was his mouth in awe.

What The Ladybird Heard is a wonderful show about a farm yard with an array of the usual animals, including a prize cow. Two local thieves devise a plan to steal the prize cow, but their plan is foiled when the, usually silence, Ladybird hears their plan and involves the animals to scupper their attempt at stealing the cow.

My nephew has read the book many times, but I, myself, had no idea the premise of this production. As an adult, I loved the concept – it was easy to follow, it was fun and full of mischief and learning opportunities for children. The production takes the book and changes some of the written to a song, adds other songs, with dance and jaunty movements across the stage. This is fun and you find yourself often dancing along.

The Ladybird, Cats and prize Cow are already there and available, but a wonderful sequence occurs when the farm hands use bits and pieces on the farm to create the other animals for the tale. This is so fun when you try to guess what they are developing, what noise the animal may make, and this makes it full of magic and curiosity.

There are plenty of opportunities for audience engagement, with the encouragement for children to sing, to make the animals noises, to boo and hiss and cheer. As for my nephew, he stared in awe the entire time, my sister informing me that this means he is really enjoying it – a brilliant sign. Even offering him a drink and snacks throughout meant putting it in his eyeline because nothing else could take him away from the stage.

The set and props are so well thought out, with great attention to details. The paper flowers grow up the wall when they are watered, the sun and moon come up and down in the background, while most of the animals are moved by the performers, you soon forget this as they are so cute to look at and so funny when they get involved.

The performers themselves are so talented – at no point did they corpse or lose focus, when at times it could have been easy to do so with the silly, funny additions made. Along with recorded music, the performers add music and soundscapes using live instruments which I always think is a great thing to add to a children’s show, giving them a chance to see something they may have never seen or heard. They also sing live, with great voices and well thought out harmonies, the songs themselves are easy to pick up and after a sentence or two, you find yourself singing along yourself.

What The Ladybird Heard is perfection. It is funny, it is colourful, witty and well paced. As an adult, I found myself encapsulated, singing along, and enjoying every aspect, even guessing what would happen next. My nephew, was stunned into silence and when it finished, could not stop talking about what he saw on stage. It is the perfect production to watch with theatres opening up and to get children into theatre.