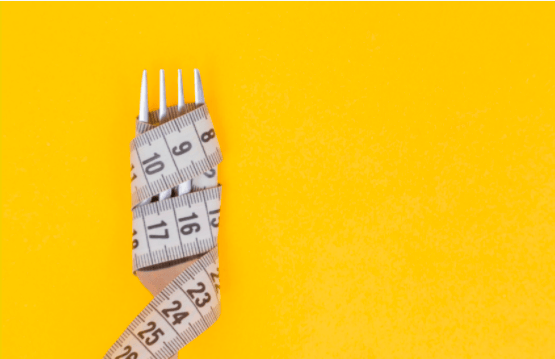 I’ve noticed over the last few years, along with celebrating bodies more, plus size being more accepted, and the new term I found this year of “mid-size”, there have been more and more productions about fatphobia, body acceptance and the mental health surrounding this. Which is important and necessary.

This production comes at a special time in my own life. After personal trauma, I found myself over a year ago having put a lot of weight on and being very unwell. When the pandemic hit, my life changed, and after losing a lot of weight, I currently sit at where I had always been on the scale, although yo-yo-ing to slimmer and back to this weight, most of my adult life until 5 years ago. Therefore, the talk about body positivity, health and weight is a big part of my life, and always has been as someone who has been on a diet since they were 8 years old.

I fear I have to a degree of subconscious bias in this review and how I felt about it as someone who has been “average”, severely overweight and unwell with it, and unhealthily thin.

Labyrinth Diet is set at a clothes swapping party, where the main character goes through her inner thoughts and feelings while battling her “friends” and their “perfect bodies”. In a sort of caveat, there is a line where the character makes it clear that she is not overweight but of an average size. And while this is appreciated as the actress clearly reflects this physically, therefore we are not at a “I’m obease” but actually, the actress is average which is frustratingly shown in media and body positivity plays I have seen, I struggled overall with this approach.

This is not to say that no one on any weight spectrum does not have the right to be self conscious, have hang ups and be upset with their body, but while the character goes on about her thighs, her belly, chub rub, not touching food in front of these shallow other character’s, it just feels hard to accept and to see yourself in, when, from a personal experience, you have been at all spectrums but know that at the unhealthy weights (overweight or underweight) these thoughts are so much more, with the points trying to be made in the writing lacking support and often being shallow, not trying to bring across how it effects a person mentally and physically.

The direction of the play chose to go with the one actress playing her main character but swapping into the other characters. Anjelica Serra is a brilliant actress; the ability to change into at least 5 other characters, all clearly being different, physically jumping from spot to spot on stage, i’m in awe at how she didn’t just pass out half way. However, I couldn’t help but feel like this was something you try in acting training, making it feel slightly unpolished and unnecessary. Either other actors could be involved, even just 1 to play the other characters or the writing itself could have had the main character speaking into the void, and responding to silence. At one point when the character/actress is exhausted from jumping side to side, it does mirror the exhaustion of how she feels in society with herself but that is where it stops. This concept needed to run through the entire play.

What I did appreciate is the elements when the character plays out these fictious scenes of euphoria, or conversations that feel like the “happy ending” only for her to be honest and say, it never happened. It’s too easy for the characters to become perfect people and for the ending to be what you expect. But to be honest, who out of us doesn’t really follow through with those moments of being courageous and confident? Hands up people.

In conclusion, Labyrinth Diet has all the basis to be a poignant play but is still quite far off reaching that goal. It feels like it still needs a clear picture on what it really is about and what we, as audiences are to get from it.