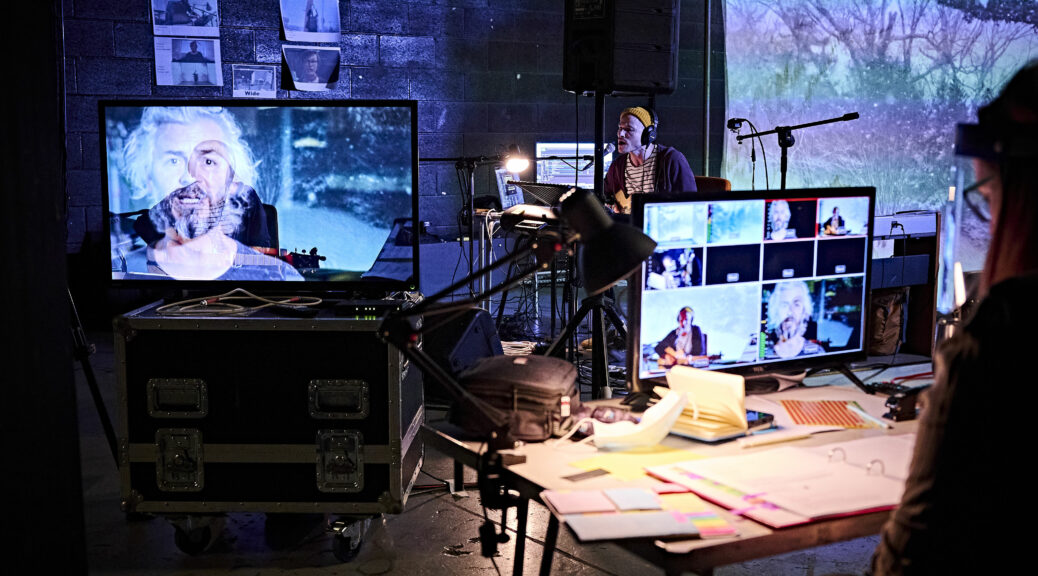 Possible, written and performed by Shôn Dale-Jones, follows on from our last year where digital Theatre became a lifeline. The show is a live stream, and so there is instantly a difficult expectation to represent the stage through tiny phone screens and laptops, or even on a TV if you’re lucky enough! In this instance, while a really interesting piece of performance art, you cannot help but feel as if you’re missing an indulgent theatrical atmosphere…

Possible is a love story – between Dale-Jones, his wife, his daughter, his family, all types of love. But with that love comes reality, comes darkness, and hidden secrets pushed way back into the back of the mind. Using multimedia, from different camera angles and effects, music and soundscapes, to projected images, Dale-Jones features as the one man band (bar his accompanying musician); the normal element amongst strategic chaos. He is the story teller surrounded by a technicolor, crazy world.

The piece is fast paced, and tackles wonderful, lovely experiences, punctuated by the not so. His love for his family is paramount, but then reality hits when they try to figure out if their mother is having a breakdown, going through dementia or if it is something they shouldn’t be concerned about. Dale-Jones steers away from multi-characters, and paraphases them instead; “he said”, “she said”, “she replied” and so on, as if reading a tale from a storybook. And this is effective. Sometimes it is all too easy for one man plays to try and recreate characters, when telling the story and their feelings is more than enough.

The 80’s, 90’s, punk, psychedelic, an essence of what I would say it electronic type aesthetics that kids are recreating on Tik-Toks and most relevantly, a reflection of Bo Burnham’s latest Netflix show “Inside” fill the room through multi-media, creating changing in plot points and scenes; something more than a blackout or watching people move their set in front of you. While clearly not inspired by Burnham’s latest show (both likely to have been conceived separately at the same time), there’s an element of depression, of struggling mental health and grief, compacted into one room. Dale-Jones isn’t singing or playing a piano but his changes in scenes through light and sound is similar to Burnham’s and the deterioration of life through lockdown is prevalent. The music and colours are addictive and weirdly joyous to hear and to see such a different approach to performance.

Reverting back to my beginning comment, this is where it falls short. This is of no fault of Dale-Jones, NTW, anyone really but this felt like a show that would be magnificent to be in the room of. You get a sense that the projections, sounds, lights, colours could be engulfing you, enveloping around you, and while life is more about streaming right now, it would be exciting to be an in person audience member and participant.

Possible is a really interesting show – experimental, layered and what Welsh fringe theatre is really about. I truly think this type of Theatre is unique to Wales and it’s wonderful to be able to watch all the way from London.