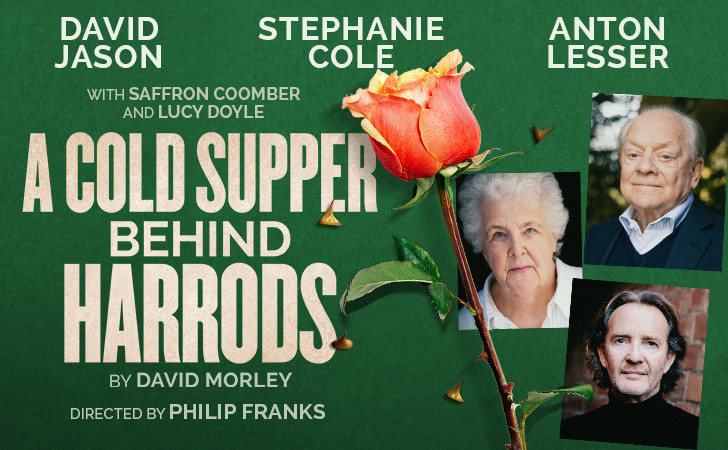 A hybrid, yes – but with an all-star cast.  With a live performance staged at the Oxford Playhouse by the Original Theatre Company in association with Perfectly Normal Productions and screened for one night only, A Cold Supper Behind Harrods, written originally as a radio play and broadcast as such by BBC Radio 4 back in September 2012, is now being streamed with the original cast and available on line for a modest fee.

Dubious as one’s early approach to virtual theatre might have been, the value of such screenings is now a given, and deservedly so. And this one is top of the class. Despite the starry cast, amazingly so when you learn that they are performing a live reading from the script after just one quick run-through beforehand.

The result –iconic! Admittedly, all three of the main protagonists are names you will recognise, and are theatrical veterans who have been around a long time. To whit – Stephanie Cole (ladies first), David Jason and Anton Lesser, all highly skilled thespians.  Nevertheless, as is admitted in the Q and A afterwards, for all of them something completely new.

Not surprisingly, all of them rose to the challenge admirably, despite being faced with David Morley’s complex storyline, centred around the SOE (Special Operations Executive) during World War II.  Three SOE agents meet up again fifty years after the war, the purpose being to be interviewed for a television documentary investigating the murder by the Gestapo of their late female and much-loved colleague.

Initial pleasantries between the three-give way to more disturbing issues as a web of lies and deceptions emerges, leading at last to the real truth.  Inspired by real life characters and events, it makes for gripping entertainment, made even better by an outstanding cast and Adrian Linford’s deceptively simple set.

David Jason, stage veteran of such iconic television series as the unforgettable Only Fools and Horses, as agent John Harrison proves once again that age is no barrier when it comes to sheer brilliance.  As Harrison crumbles beneath the weight of knowledge revealed, Jason is utterly believable.

As the female agent Vera, Stephanie Cole is at her best playing irascible females and she doesn’t disappoint, with that roguish smile shining through at odd moments, while Anton Lesser projects a cool calm that later erupts into menace.

Adhering to Morley’s original script, which was inspired by the playwright’s meeting with two WWII veterans, the story is fictional, with love, revenge and feelings of guilt at its core.

Don’t miss it.  This is a play that will pull you in from the start to the finish.