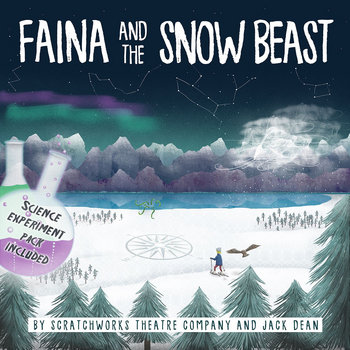 This year has been the year of the audio. Scratchworks Theatre Company have brought their original stage play, written by Jack Dean to an audio tale with accompanied Science experiments for children.

Combined in a couple of audio sections, Faina and The Snow Beast features the tale of an Orphan, Faina, who dreams of becoming a scientists. Raised by the owl who found her abandoned, Maud, who believes in the magical and extraordinary, the two, with the help of Faina’s mother’s journal, undertake the most exciting adventure full of trials and tribulations to find The Snow Beast.

The story is very easy to get into. Able to download, you can dip and dive into the story whenever you want to. With the talented voices of Scratchworks, a range of different character’s are animated within our consciousness with the use of accents and skillful voice acting, evoking images and fueling our imaginations of the character’s and their adventure.

Known for their brilliant voices and musical styling, Scratchworks bring in magical yet homely and folk like music to accompany the story, making the atmosphere and the story feel sensational, with a Disney-like quality to the story in drumming up visions of the adventure.

Punctuated with their science pack, children are able to listen to the story and are encouraged and inspired to follow Scratchworks and make their own scientific experiments. The story highlights that science and the extraordinary are not necessarily different to one another. Maud states something along the lines of why should you only have the choice of belief in science or of the magical and unusual. By bringing the two together in a theatrical story telling and with science to attempt, children and adults alike can enjoy the magic of science and stories.

Faina and The Snow Beast aims itself at children, but adults are also fully taken away to far away lands, flying in hot air balloons and feeling the blizzardy atmosphere The Snow Beast creates. A joyous and sensational story.