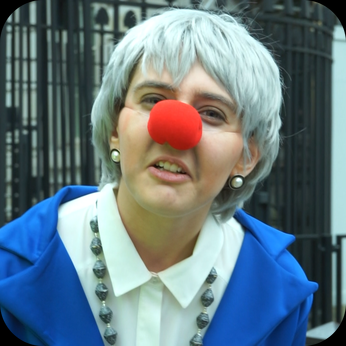 Theresa May. She’s an easy political footnote to miss. She’d probably be overlooked in any year: but 2020 provided the perfect environment for this indentured Tory to withdraw from the public conscious. How we can imagine her laugh, head bobbing like a grotesque puppet, captured in a hundred memes, at each new Boris Johnson blunder, glad she’s not withering in the hot seat anymore.

A play about this unremarkable PM might seem like a hard sell. Playwright Amie M Marie’s book of the play, written in 2017, provides a look back to the politics of 2018. Practically a different century in the post Covid world order. Marie provides an especially important perspective as a queer, disabled writer, and comedian: belonging to two of the groups most marginalised by Tory leadership.

On the one hand, certain references date the play. On the other, the play can be harshly prescient. Jokes that once may have been played small, become harder to laugh with and easier to grimace at. The following exchange, part of a scene where Miss May is confronted directly by a member of the public, is one of those moments:

This sounds just like the hand-wringing Johnson supporters’ level on his behalf. How could any of us know what to do when faced with a pandemic? In our current situation, as in this play, we might not have all the answers ourselves. But we generally have a better idea of what not to do.  What would rankle an individual conscience more than a political one. Marie’s play also shows how well-kept convictions, knowledge and assurance, have been damned by political inaction.

The play illustrates the failure of senior Tories to engage with – let alone convince us they believe – their own rhetoric. May repeats mantras which she’s well aware make as much sense as the ramblings of King Lear. Visual representations of sound bites, real statistics woven into dialogue may shock you. But that shock has not translated to a change in voting habits for the last 10 years. A play designed to tackle complacency has accidentally created an incriminating portrait of it.

Theresa May, as played by Marie, appeared on stage with a red nose. An unconscious clown in the empress’ new clothes, alongside her party’s faithful hand-me-downs of cruelty and coldness. The play deftly illustrates May’s clownishness through frenetic physical comedy and a whirligig cast of political cameos. But when it slows down, it’s unafraid to show she is the owner and creator of her own devastating decisions – holding her to particular account over her policies towards disabled people.

One problem with the written material vs the performed play is that I can’t imagine to what extent the costuming works. As written, it makes sense. it’s hard to visualise the performance from her dialogue and monologue, and advertising for the play previews seemed quite ‘on the nose’: not just playful but almost self-congratulatory in a way the play just isn’t when you read it.

The tension and exhaustion May’s character feels are tangible just through the written material, but Marie was careful not to fall into the ‘trap’ of portraying her sympathetically.

Although May’s tenure was dwarfed by the outlandish characters she was surrounded by, her calculated greyness enabled them to rise through the ranks the minute she jumped ship. The play introduces Jeremy Hunt (through a joke either I can’t remember or everyone else will have forgotten), Amber Rudd, Michael Gove, Boris Johnson, Macron, Trump and the Queen. While one thinks more could have been made of the President’s cameo, Macron provides a much more clever slice of comedy, while the interaction between May and the Queen provokes a hilarious crack in the Prime Minister’s mask.

The cast is rounded out by Two Points Garage, Hackman, Dim Bee and The Mail. TPG, as he is later referred, is as brash a character as you would expect, but there’s real tension in his control over May. Hackman represents media complicity, while the Mail is probably the most well written role. He offers rare detachment, perfectly content in the knowledge of his own power.

The play also contains a multiplayer role for 3 characters who represent the public: the Junior Doctor Clown, the Cleaner Clown and the worker Clown.

Their inclusion felt uncomfortable. The only characters who attempt to use their fragile autonomy for good, and they’re considered clowns. Their names implicate them as another class of fools in politics. Hope and conviction makes them clowns. Perhaps this hurts only because it seems true. It seems a foregone conclusion to Uk leftists that few people will hope for change, and fewer will act on that hope in the voting booths. But directly comparing them, by just their class of character, to May, seems mean-spirited. Again, it would be helpful if I had access to the original production. Are these dressed as clowns too, in full regalia, or merely named as such?

As a reading experience, it’s the subtler jokes and intense monologues that make an impression. As for the performance, jokes which seem a little stale on the page might have been the perfect laughs for a communal audience. An audience which the play hinges on. May directly addresses them and pleads with, belittles, and implicates them in turn.

The play will retail as a physical book and e-book, in both a bonus edition and as a basic performance script. I was given the copy flush with interesting bonuses. These included a number of introductions to the play, earlier short ‘Emperor May’ and, a brilliant interview between Amie Marie and clown Conér Swords about their political performance art, and finally reviews from the initial performance run of the play.

However, I questioned the formatting at times. The sheer volume of additional material before the play seems like overblown padding. It’s interesting to see how the more intelligent play evolved from a less polished short (which you can watch a brief introduction of here). The short is a bit sophomoric, however, and depending on whether you think its humour lands it may predispose you against the longer play rather than show you just how much the latter developed.

Finally, the formatting and editing of the copy I received really let the content down. Certain images are copied to back-to-back and spelling and grammar issues are frequent annoyances. This carelessness shows a lack of respect to Marie’s material. I can only hope that she goes on to have more opportunities as a creator, and her later material has the support of publishers who give it the dignity it deserves.

The play is available to buy in multiple formats here.

2 thoughts on “The Play about Theresa May by Amie Maria Marie, Review by Lois Arcari”