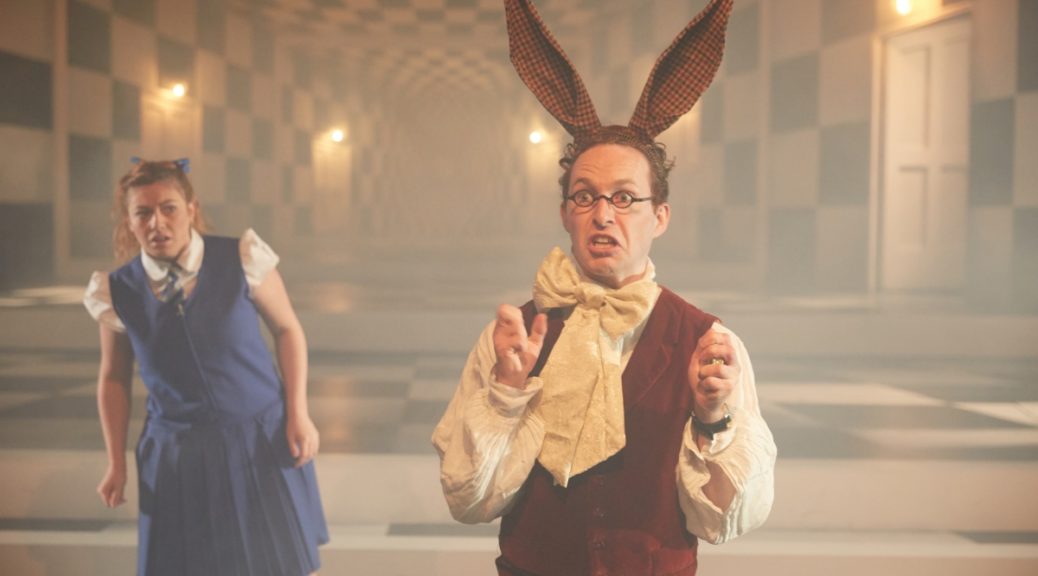 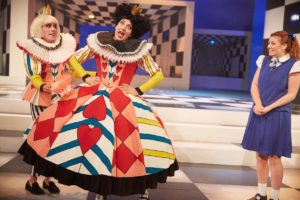 Sherman’s Christmas shows are becoming one of my family’s staple events of the Christmas season. For the second year in a row, their main stage show has avoided an overly ‘Christmassy’ offering (last year’s production of ‘The Borrowers’ was one of our stand out shows from 2017) but despite this, they’ve still managed to inject a large dose of festive fun and frivolity in to the production.

Director Rachel O’Riordan has brought together an all-Welsh cast and it’s great to see some familiar faces who you may recognise from other stand-out productions from the last few years. Hannah McPake (who plays the Queen of Hearts) comes from the ‘Gagglebabble’ duo with Lucy Rivers, who also features in the show’s musical line up. Having seen both Wonderman and Sinners Club with Lucy and Hannah, you know you are in for an off-the-wall experience if they are involved.

Come with us on a wild, wacky and raucous ride into Wonderland.
23 Nov – 29 Dec
Tickets: https://t.co/tfvIwW1XY3

I’d also recognised Elin Phillips as the Cheshire Cat/Caterpillar (who I saw in Tom Jones the Musical by Theatre Na n’Og), Alexandria Riley the March Hare/Tweedledum who was absolutely incredible in Fio’s production of The Mountaintop in Cardiff’s Other Room pub-theatre, Keiron Self (The Duchess) who also featured in last year’s Sherman Production of The Borrowers along with the hyperactively hilarious White Rabbit Joseph Tweedale.

It’s a familiar cast, but as an ensemble and with the innocence of Alice, played by relative newcomer Elian West, they had wonderful energy and chemistry. I was also glad to see Callum Davies’ debut as the Doormouse, having joined the cast through the Sherman Players and as one of the Sherman’s apprentice actors. It’s great to see new talent being supported by Sherman – and Callum was adorable as the mouse!

Firstly, mad props to designer Hayley Grindle and her team, who created a stunning chequerboard set, which was dazzling and disorientating at the same time! The intimacy of the space in Sherman creates such a lovely, cosy atmosphere and the set and props were clever and creative (the baby pig, the trap doors, the table legs, the ticking clocks, the tiny doors at the end of the corridor, the teacups, mushrooms and roses).

Writer Mike Kinney added his own flair to the show, which did not chain itself to the original book or Disney movie visuals, but found its own voice.

A Duchess with a valleys accent, Tweedledee and Tweedledum with broad Newport accents and a flavour of the Welsh language peppered in dialogue exchanges and songs brought a similar kind of relevance and familiarity that Christmas Panto-goers will know and love.

Having been a life-long fan of valleys Pantomime Dame Frank Vickery who sadly passed away this year, it was lovely to see Keiron Self mimicking the same kind of high-camp, neurotic valleys Mam vibe which always hits home with me!

The littlies in the audience also loved the huge presence and scary-as-hell crazy eyes of Hannah McPake as the Queen of Hearts. Francois Pandolfo’s turn as the hen-pecked, simpering and anxious King was simply brilliant. I hadn’t expected the show to include musical numbers and it added another rich layer to this lovely production, with the cast ensemble vocals (particularly in the ‘Alice’ intro song and refrain) so sweet-sounding and warming.

Another standout song which children will love (and you’ll see them mimicking it in the foyer afterwards, no doubt) was a song about Alice’s baby sister (who it turns out has a head of a pig). It’s possible you may also have the ‘Wah wah wah…’ song in your head for the rest of the evening. 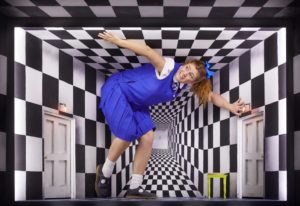 I had two ‘mini-critics’ of my own with me, age 9 – and they are typically the harshest of critics and don’t pull any punches. What were their final thoughts?

“Why did Alice not have blonde hair?!” said one of the littlies, who was completely exasperated with this minor detail. I explained this was a theatre show – not a ruddy Disney movie. Things always change on stage.

“Still – everyone knows Alice has blonde hair…also, I thought the Wah Wah Wah song went on for ages.”

Riiiiiiiiiight – so what would your marks out of five be, I asked them both – dreading the answer.

Sheesh! What about Mini Critic 1?

“Definitely a 4.5 – I thought the singing was lovely and they were really funny.”

Jeez, maybe the Queen of Hearts was right about kids! I also couldn’t believe that these two did not share my enthusiasm for the Jam tarts which the Sherman had so thoughtfully provided for their guests on opening night.

“Look kids – JAM TARTS…WOWWWWW!” It doesn’t take a lot to get me excited, I admit.

I tried threatening them that if the Queen of Hearts heard their comments, she’d have their heads off but….

Kids today! You can lead them to a finely tuned production of Alice, but you can’t make them eat the Jam Tarts or get over the fact that Alice didn’t have blonde hair.

Ultimately though – we all agreed this was a great little show, which got us feeling very excited indeed for Christmas (oh, and I still have the Wah Wah Wah song circling my head!).