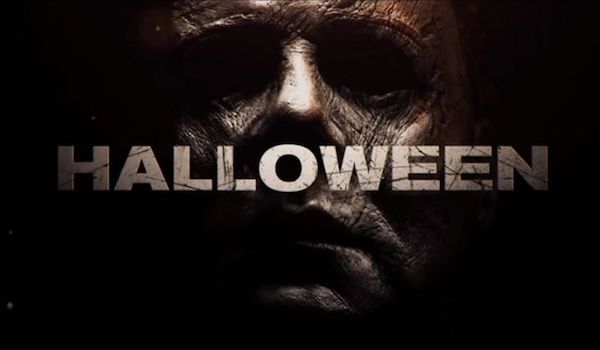 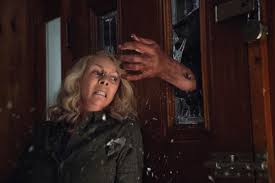 My god, this franchise is confusing. Ironic because the original movie is so a simple, and minimal with its story.

John Carpenter’s original Halloween is one of the essential watches for horror lovers and movie fans in general. It is the perfection of the slasher genre, with a killer that is pure evil, a simple but effective way of shooting it and a score that hooks itself deep in your brain. Yet at the end of the movie it seems like it was done but the success meant more had to be made and so they made seven more movies, then Rob Zombie told his version of the material with two movies and now we are here, forty years later from the original and ignoring all the middle material. But this is the third movie to be titled Halloween. Told you it was confusing.

Opening the movie are two British podcasters that host a show about killers, crimes and other such grim subject matter. They go to Smith’s Grove Rehabilitation Hospital where for forty years Michael Myers has been kept locked away from the rest of the world, never speaking a single word. One of them has something for Michael though, the mask he wore on his night of rampage. This sends the other inmates into a frenzy but Michael still stands there not saying a word.

Cutting then to the classic score we all know from this franchise and a rotten Jack-O-Lantern that slowly reforms back to life, a symbol of Michaels reawakening, the franchise and this whole gruesome affair.

Carpenter himself does not fill the directing chair this time around but he is back as the composer. Carpenter composed nearly all his movies and Halloween was arguably his best job. A dark theme that is like the pulsing of the heart that grips you in tension and then a movement that ignites fright. In recent years he has been more focused on his music and he is very good at it. Here he gets to do one of the things he does best, he doesn’t completely reinvent the theme or copy and paste it, it stays true to the core of the score and adds little things, like a power chord from a guitar and other layerings to deepen then experience, it’s a great score that has received an appropriate update.

Filling in the directors chair is David Gordon Green. He has a diverse filmography, nothing that would make someone point to him and say “He’s the man for this job!” but we’ve had plenty of surprises of directors taking on franchises and actually doing great things with them. He and cinematographer Michael Simmonds incorporate a few intricate long shots that build up the suspense well and he portrays the kills with loud screams and plenty of blood.

Whenever something becomes truly popular and others seek to replicate it and/or a franchise is kicked off there is a big risk of homogenization. We want to feel like this is the world and characters that we’re familiar with but not a color-by-numbers experience. This gets a little closer to it but luckily strikes the right balance of being its own thing while taking its cues from the original and also giving a few nods while it’s at it. An example of this is that a key image is a white mask Michael wears, there isn’t any true significance to the mask itself, it was chosen because it has blank features which reflect the character, in context Michael stole a mask while getting ready for his night of slaughter. Same for the boiler suit, he happened to cross paths with an unlucky worker, here he by chance kills another worker in a similar navy blue boiler suit, would he have taken a red one? Or not killed him if it was yellow?

The most original part of this entire movie is how it portrays Laurie Strode. She is now a grandmother, slightly estranged from her daughter and granddaughter, living in a fenced off house ready of anyone that comes looking for trouble. It’s not that unbelievable yet I can’t think of many other movies that have done this, so many characters in horror sequels seem to go back into normal life after the traumatic events. Laurie was just a regular teenage girl and for no real reason came face to face with her friends being killed and pure evil. Jamie Lee Curtis fills the role with badass authority, taking no nonsense while she loads her guns and fragility, clearly having to live her life in fear and paranoia.

This is a refocus of Michael Myers as an unstoppable force of nature. A slow monolith of death that will keep coming no matter what. This was the original intention and is what makes the character so endearing. But in the first movie he was twenty one years old, now he’s in his sixties, I have to question whether his slow pace is because he doesn’t need to rush or because he’s getting on in years. Another interesting touch is that Nick Castle is playing him again, he hasn’t done that since the first movie. His average height and build add to his inconspicuous nature and his smooth walk with an upright posture adds to the unsettling nature because he’s about to commit the most barbaric act. An extra touch is the prominent sound of his boots while walking, like the ticking clock of death, they sometimes abandon this when he needs to pop out of the shadows. I guess that would make him easier to find.

This is probably the best sequel that this great movie ever got (though there truly isn’t much heavy competition), it caters to the fans while invites new viewers in. But part of the enduring quality of the first movie was how it could show horrible acts but could be quiet and slow. This movie is more generic and loud. In terms of slasher horrors this could be much less subtle and more poorly made, for Halloween, it could be better but is worthy enough to have the name.