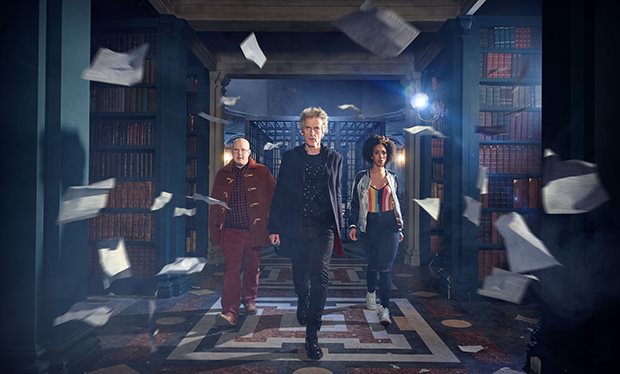 Please click on the sound file below to listen to this article or read the text below.

Forget the Series Arc are we being taken around a full-blown circle?

I am a forty something year old who has a childhood fondest for the Doctor, and as such I like to guess.

Ever since the realisation of Bad Wolf, I have been fascinated by the story arc. Waiting for the episodes written by Russell T – and in later years Stephen Moffat trying to see if a glimpse of the story arc could be fathomed.

Saturday night seemed to be the night for season ten. Written by Moffat and finally laying to rest the mystery of the vault, we had a brief reminder of how wonderful Michelle Gomez is as Missy, and whole universe of possibilities opened.

The plot was complex and played second fiddle, as my mind wondered. It took the blind Doctor, Bill and Nadul (who every week is evolving into a deeper layered character, under played skilfully by Matt Lucas) into what transpired to be a video game for some withered monks who were basically playing a bizarre version of SIMS, except the final end game was how to destroy the earth. Luckily the Dr had managed to send himself a message via his sexy ray bands and by what looks like will be the hand of Missy – the day may be saved in next week’s episode. In the back of my mind I had seen this playout before, and unfortunately ever since Bill has arrived I have had that feeling.

A new writer has emerged and with him cultural diversity is being rammed a little bit down our throats, but despite the colour of her skin and her fondness for the same sex, Bill is Rose, and the episodes we are watching are little more than enjoyable rewrites. Almost a by line, to pan out the season for the main event. ……..

I have no idea, but I have a whim. The trailer has been seen with The Master not Missy Master but John Sim. This could be a flash back or it could suggest degeneration and if the Master can degenerate then so can the Doctor. This had just been a thought until Saturday – On Saturday we saw the Doctor sacrifice something in his future regeneration to gain sight. Then there is Riversong’s  book which was last seen with one of her deaths in the library – David Tennant’s Library.

I don’t know how, I don’t know when or where but I think this story will revisit the tenth Doctor, Rose the library and a story arc which will blow all other story arcs out of the stratosphere. Don’t forget who the new writer is, there is a lot to be said for 60 degrees of separation and a whole wonderful world upon worlds that these writers can play with.