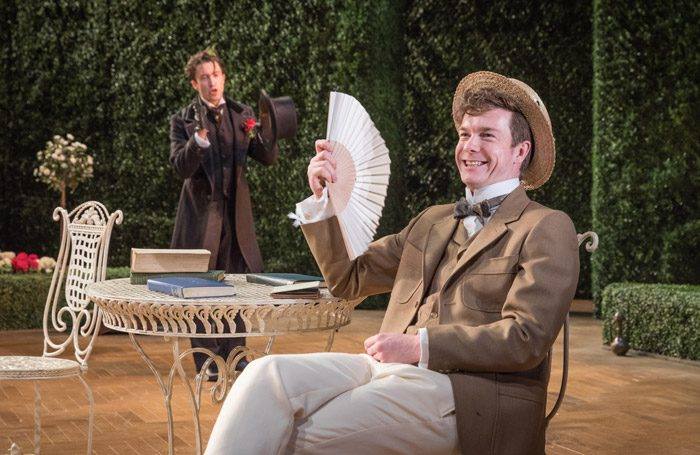 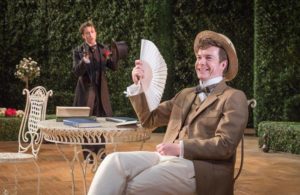 I must confess my knowledge of “The Importance of Being Ernest” is limited to a handful of overused quotes about ladies’ diaries and a handbag. So on one hand I had the anticipation of the unexpected but on the other the uncertainty of the unknown. 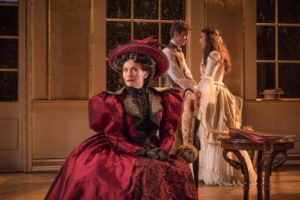 From the second I took my seat I was no longer in The Antony Hopkins Theatre but transported back to Victorian times, the back drop giving the illusion of a period house, the set pieces minimal yet effective. Not a piece of furniture or prop wasted from the red leather sofa to the finely sliced cucumber sandwiches. As an additional trick to just drop you from your 21st century woes into the height of 19th century society no house lights dimmed and the entry of Nick Harris as the excellent if not scene stealing Merriman the Butler (and in later scenes Lane) was an unexpected start to the play. This instantly added to the feeling that I was just sat on the opposite sofa in the world of the play. This concept ran throughout, the cast all gave the impression they were at one point or another addressing the audience directly and letting us into their bizarre three act melodrama for the day. 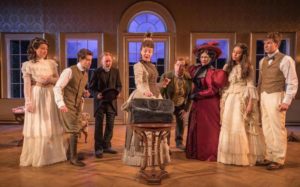 The story as a whole was, on the surface a mild farce with a poor plot centred around identity, a name and relationships…. on the surface. The real brilliance of the play lies within it’s ironic undertones and satirical speeches poking fun at society, marriage, relationships the upper class – and much more. The actors were craftsmen in as such as they delivered outstanding performances of beautifully timed comedy, especially Matt Jessop as John, and James Backway as Algernon yet they never failed to let the undertones of what needed to be delivered get across. The relationship between the two actors on stage was a delight and one of the main reasons I found the play enjoyable. Their movements on stage were perfect, timed to dance like perfection. The end of Act II in the garden saw James Backway land a shot at Matt Jessop with a muffin that I doubt he can replicate again!!! But it wasn’t just the men who stole the show, not to be out done the ladies held their own and the bitchy banter between Gwen Fairfax (Emma Denly) and Cecily (Robyn Cara) was a master-class in delivery. 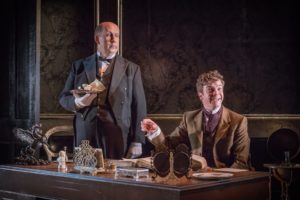 Of course the real star of the show is the writer Oscar Wilde this is without doubt his most famous play and understandably so. He writes of a world he was obviously part of and a world he was very sceptical of – we see in polite society, as it was called, that the higher up the social chain you were, the less polite one needed to be. Overall Victorian morals and views were different to todays, as a society we do not play by some of the rules in place some 100 years ago – however the majority of the play could be as relevant now as it was then and with a few tweaks this play would be a voice for today’s women, today’s illegitimate children, a voice against high society, it was in this area where I was at odds with the direction of the play as a whole. Although I found the set stunning, the garden with its 20ft plus high hedges even smelling of roses, personally I would have liked to see a modern take on the play. Yes, it’s important to keep tradition alive, yes the actors and the set and the director all did a fantastic job but Oscar Wilde was such a revolutionary writer, he was writing about topics in a way that were so ironic and so iconic that 100 years later we are still talking and quoting him and laughing at his plays…. Would he really want them played out in the same staid way? I can’t see that he would – I think he would be wanting directors to be using his words to incite the same outrage he did. 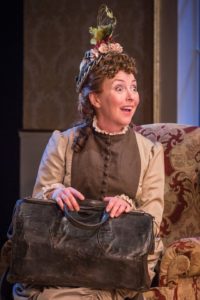 Despite my enjoyment of the production it was disappointing to watch the play in a half full theatre, in the main it was a sea of older audience members and I had to ask …. Is that because this is a traditional performance of what is viewed as an old play for an older audience who love Oscar Wilde? I hope not. This production has received excellent responses and I know the theatre is undergoing physical changes at the minute. I am excited to see the direction this takes but if it continues to stick to the same programme I feel it will continue to have the same type of audience I was part of on Saturday afternoon. I am not going grey (yet), not necessarily an Oscar Wilde fan but I found this production a total blast from start to finish. It felt slightly on the longer side as it had 3 acts as opposed to the usual 2, however when you consider the extravagant set and the time it would take to get in and out of a bustle I am not surprised but it was worth the wait.

Overall I would definitely recommend this for all audiences no matter what colour your hair! 4 stars out of 5