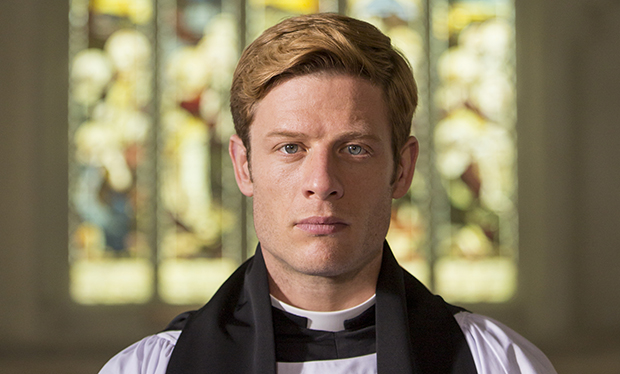 As Grantchester prepares to get underway with its third series on ITV, I felt it would be a good time to reflect on the recent surge in clerical figures appearing on our television screens. Whether in comedy, drama, or documentary, the rise of the TV vicar is very exciting on a personal level. But it does intrigue me that, in this supposed age of secularism in Britain, such men and women of faith are coming to the forefront of British television. They are no longer the bit part players, given only a ceremonial role in soap marriages and funeral services. Instead, TV writers, directors and producers seem to be open to the idea that these men and women of the cloth can actually lead a show. They have entrusted them as protagonists. Praise the Lord!

Any doubts that may have surfaced in the early days of this “revival” must now be put to bed. Gone are the days where the religious output of the BBC was a mere half-hour every Sunday for Songs of Praise, and the obligatory documentary to mark the Christian festivals of Christmas and Easter. Don’t get me wrong, these still exist. Most recently, Fern Britton took a trip to Jerusalem to recount the story of Jesus in Fern Britton’s Holy Land Journey. Moreover, they still have a place within the television schedules. I think the evolution of Songs of Praise to include modern and contemporary Christian music, alongside congregations belting out 19th Century hymns, reveals something of this show’s continued relevance to its watching audience. But the representation of Christians on television is now moving beyond these niche slots to feature in other, more populist, areas of the TV landscape.

Nowhere is this more evident than Sunday nights. It is perhaps apt that the traditional day of worship for Christians should also be the time when two of the biggest contemporary dramas are broadcast, both featuring clerical characters. As mentioned earlier, Grantchester begins its third series on Sunday at 9pm, having previously been broadcast on Mondays (Series 1) and Wednesdays (Series 2), again in a primetime 9pm slot. Who would have thought that a show featuring an Anglican vicar as its protagonist would regularly pull in 6 million viewers? Yes, it taps into the current popularity of murder mystery dramas. But it is not afraid to take seriously the vocation of James Norton’s character. It deals with issues of faith in a very open and unabashed way. The Revd Sidney Chambers is not perfect, and the character himself never claims to be. He wrestles with the conflict and dilemmas that emerge from his faith, sometimes overcoming them and sometimes not. Here is a man who does not think he is better than us (the traditional stereotype of TV satire) but a man who is like us. This empathetic portrayal, I believe, is one of the reasons why the TV vicar is becoming increasingly visible on our screens.

The other big Sunday night draw is the ever-popular Call the Midwife. Broadcast on Sundays since its inception, it remains the highest-rating drama on British television since the turn of the century. And at its heart is a group of Anglican nuns. Writer Heidi Thomas has created such a wonderful drama full of real human stories. Yet she does not shy away from treating the nuns’ faith with the same care and attention as the episodic story arcs of one-off characters. The sisters receive just as much dramatic attention as the nurses that work alongside them, as does the resident vicar Tom Hereward (played by Jack Ashton). There are numerous examples of these faith-filled storylines and, like in Grantchester, the conflicts and desires at the heart of these characters are explored with such depth of care and attention that one cannot fail to empathise with them. As a result, we can begin to understand and take faith more seriously. It is no longer a weird, ancient pastime but lived experience, a legitimate (and complicated) part of a person’s identity. 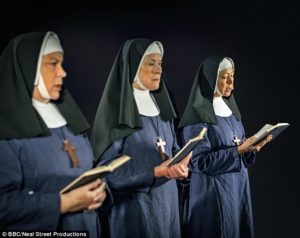 These are just two examples of the increasing presence of clerical characters on our TV screens. They are by no means alone in the growing pantheon of shows featuring a clerical protagonist. Others include: Welsh-language drama Parch (featuring a female cleric), US fantasy drama Preacher, Sky Atlantic’s The Young Pope (with Jude Law), and BBC daytime series Father Brown. But if you think this list of dramatic representations means the death of the vicar in TV comedy, think again. Recent series such as This Country (BBC3) and Hospital People (BBC1) remind us that they still have a place within the sitcom genre. They can still be figures of fun, much like anyone else. But the sitcom is no longer the only place we find them. 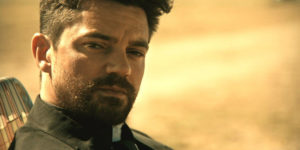 After years of unpleasant stereotyping, in which they have been satirically lambasted, played as figures of ridicule, and been a pointless but necessary figurine at weddings and funerals, it seems that the TV vicar finally has the opportunity to tell their own story. Since the arrival of Rev, the floodgates have opened to allow the small screen cleric some actual and proper screen time. This can only be a good thing, particularly in an increasingly secular culture that views faith with suspicion. So here’s to the rising prominence of Christian clerics on television. May the positive portrayals continue, and may other faith groups follow. (And I raise a glass of whisky – Sidney’s favourite tipple – rather than the stereotypical sherry as I say that.)