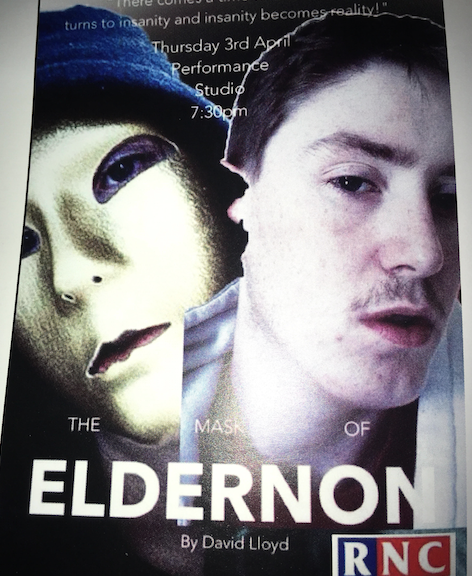 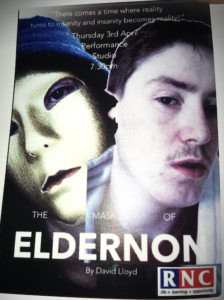 “Hey everybody, my name is David Lloyd and as much as I hate to blow my own trumpet, Im going to be like Marvin Gay and tell you my life story. You see, I’m 22 years old and I am currently attending my third year of BA Hons Scriptwriting at the University of South Wales based in Cardiff. From my past writing experience I find myself drawn more specifically to psychological dramas, but I do try to widen my genre field. Admittedly, I would jump higher than a grass hopper on a pogo stick at any opportunities, but I do prefer writing for film and television where I find myself working on amateur short films with the master film production students.”

“Since I was a child (where others say I still am!) I have held a passion for creative writing, but it wasn’t until I had performed in my first self-written theatre play where I knew which career path I intended to pursue. The performance, title ‘The Mask of Eldernon’ was a psychological drama based upon a mass murderer who suffered from a split personality disorder where the protagonist was both the victim and the culprit. It was performed by myself and four of my peers as part of our course at the Royal National College for the Blind (RNC) in Hereford.”

“Oh… perhaps this would be a good time to mention how I am in fact visually impaired- it’s funny how some things slip your mind. Anyway, the diagnosis for my sight loss is a condition called Retinitis Pigmentosa (RP) and I have a detached retina which was caused from fluid seeping in beneath my eye. From six months of age. I also have an extremely rare metabolic disorder called LCHAD where my liver is unable to process fatty acids so I must stick to a three gram diet and I sustain my energy from an overnight feed. In result of this condition I have problems with my muscles and my energy levels and it attacks the nerves in my hands, feet and eyes which is what caused the site loss, but enough about the reason that would make me the perfect Olympic athlete, let us return to the topic of RNC.”

“Being a college which specialises in visual impairment, the purpose of me attending was mainly to be taught independence and mobility skills. As well as this, in the two years I attended I managed to obtain a Level 3 Diploma in Performing Arts, a single award in Brail and a C in re-sitting my A Level English Literature. I feel  my biggest achievement was the confidence I had built with the help from my friends. Being amongst other people who had gone through the same experiences and had tackled the same difficulties as I have has really opened my eyes. The whole experience has change my life completely and inspired me to chase my dreams and overcome any obstacles that stand in my way… except from a Rubiks cube, those things are very hard!” 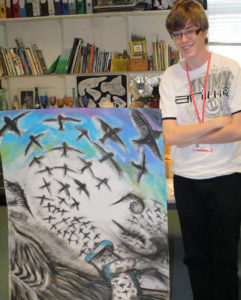 “Speaking of difficulties, despite the little deterioration that I already had, I have lost a significant amount of site in my right eye during my A Levels and couldn’t see how I was going to cope, especially when I was studying art and design, but I suppose If Van Gogh was able to paint with one ear missing then surely I could do it with one eye… yeah? you see what I did there? One ear, one eye- oh forget it. Anyway, this sudden site loss meant that I had to apply drastic changes to my work method, like studying films in class, but having to wait until I went home to hear the audio description, reading out of large print text books and perhaps the cruelest… sitting in the front row to see the board. The changes in my artistic techniques however, did allow me to stumble upon a hidden talent of drawing surrealistic images derived from my imagination with the smudging of compressed chalk. 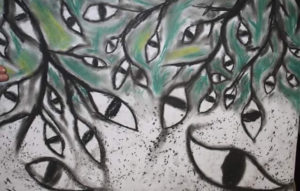 Now for those who don’t know, compressed chalk can get extremely messy and stick to pretty much anything it comes into contact with, so you can imagine the site of it being used by a visually impaired student and then going home to a recently cleaned house… to a recently cleaned house with white walls… a recently cleaned house with white walls and an angry mother following the fingerprints… well you get the idea. So despite the change in methods, the giant printed books and the cloak covered fingerprints, I was able to obtain my Alevels in English Literature, Art and Media Studies, I had been accepted into RNC and I didn’t even have to bribe anyone either, which is always a plus.” 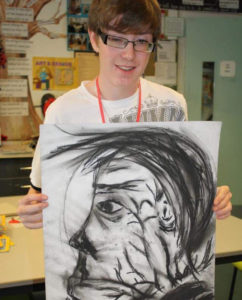 “Which then ledd me to the most scariest three letters I thought I’d never meet: U… N… I (which is just an abbreviation for the ten letter word, but this sounds cooler). I remember when I first started and feeling so scared of joining a new university in a city I wasn’t familiar with, but I kept thinking to myself ‘I just need to bite my tongue, hold my breath and jump into any opportunity that comes my way’ … but then naturally start breathing normally otherwise I wont be there for long. I understand how this may seem easier said than done, but with the support of the lecturers and my fellow peers and the provided equipment university became a life changing experience. Admittedly it was difficult adjusting to uni life what with the independence required for maintaining my condition, the continuity of eating and finding a healthy balance between work and social activity, but reflecting on it now makes me realise how these difficulties and mistake I had made have helped me become a better person and do you want to know what else… I wouldn’t have changed it for the world.”

9 thoughts on “An Interview with scriptwriter David Lloyd”