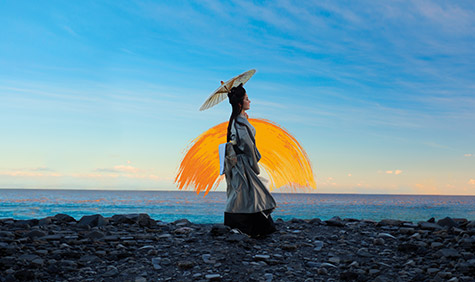 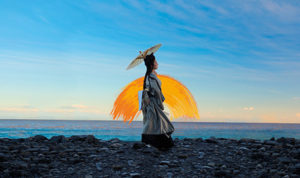 That most heartrending of operas, Puccini’s Madam Butterfly is staged by Welsh National Opera as the second in their Love’s Poisoned Chalice season. Following on after La Boheme, which opened the season, Butterfly is, like the former, one of the most popular operas and as a consequence – in these days of cuts to the arts funding – one of those most often performed.

Once again, it is a case of reach for the tissues as the story of the Japanese fifteen-year-old geisha, Cio-Cio San, who gives her heart to, and marries, a bounder of an American naval lieutenant, one Benjamin Franklin Pinkerton who doesn’t take the marriage seriously, unfolds towards its tragic end. In restaging this opera which they first performed back in 1978, WNO have wisely adhered to the original format directed by Joachim Herz and first performed at La Scala Milan in 1904.

Sepia toned sets emphasise that this is old Japan – and the gulf between the two worlds and their values runs as an undercurrent throughout, at times becoming more prominent. The political undertones are emphasised throughout the libretto, epitomised by recurrent musical themes in the orchestration, as well, as in the repeated playing of the Star Spangled Banner.

This time round WNO has honed and polished their performance of the poignant story set to Puccini’s wonderful score to a state of near-perfection. This is due in no small part to Karah Son’s portrayal of the central role of Butterfly. Not only has the South Korean soprano a voice of the utmost clarity, with a seemingly effortless ability to soar to the high notes which the role demands, but Son excels both in Act I, as the innocent young girl who believes in true love everlasting (only to be thoroughly deceived and let down by that cad and absolute bounder Pinkerton) and in Act II, where she achieves the difficult shift to the more mature Butterfly, bringing depth to the tragic denouement   This requires not only a change in characterisation but in style of singing, and this Son does, notably so in the beautiful aria One fine day..

In the role of the bad guy (and what a cad Pinkerton is to abandon his young wife so callously) Jonathan Burton’s tenor is pleasing, particularly in his duets with Son. His portrayal of the callous and worldly Pinkerton contrasts well with the naivety of the young Japanese girl who has never been further than Nagasaki, but Burton does at times lack facial expression. One could perhaps argue that this is intentional on the part of the director in that Pinkerton is a reflection of the attitudes that existed during that era. Nevertheless I would have liked a tad more expressiveness from Burton, as this can at times make him appear a tad wooden in the role.

Welsh baritone David Kempster brings gravitas to the role of the Consul who does his best to avert the tragedy, while as the bowler-hatted marriage broker Goro, Simon Crosby Buttle skips around the stage in great form. As ever, the WNO chorus is an added bonus, particularly so as the posse of Butterfly’s geisha friends in Act I, and the rendering with the orchestra, under conductor Lawrence Foster, of the humming chorus in Act II.

A production honed to near perfection which should not be missed. Catch it if you can.

Runs at the Wales Millennium Centre 17, 18 February, then touring,