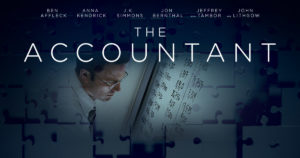 If history is any clue The Accountant shouldn’t work. This should just be an insultingly bland movie which serves to get the males excited which really dumb’s them down to a perverted sense of masculinity. However, this movie works, because of that simple little extra effort which has infused this stale premise into a gripping action movie.

We see a boy putting a puzzle together, is intensely focused on his task and keeps reciting Solomon Grundy, his parents are at a clinic for different children, this is Christian Wolff, he has autism and the doctor tells them that he needs to be handled with care and avoid intense scenery bombardment. But his father, a decorated war veteran, does not accept this, he knows the world is nothing but intense sensory bombardment, so instead in adapting the environment to Christian he adapted Christian to his environment. So begins his years of training with all the resources to become one of the most deadly men on the planet.

The boy grows into a man and he is (as the title suggests) an accountant. He is very good at what he does, deducing what is needed for his clients and working the rules to accommodate them. He gets hired by a big robotics company to go through everything to make sure their finances are secure before they go public. It’s fifteen years of intense complex finances so they doubt anyone is up to the task. In the company office clerk Dana Cummings (Anna Kendrick) offers him help but he is most comfortable in solitude. He gets to work processing all the years of intense data and writing it on his whiteboard and when that runs out uses the glass walls of the office.

Affleck is actually rather understated in terms of other performances. Usually there is an overemphasis on the quirks and behaviors that come with autism (Dustin Hoffman in Rainman for example), to be sure you can tell he is abnormal but not enough to be an obvious red flag. He can move about in society. He is very blunt an minimal with his dialog and clearly is repressing great frustration when people talk more than they need to. He’s also given his typical behavioral quirk of blowing on his fingers before starting any task.

Kendrick has typically been cast in comedy roles as the cute, spirited one in comedies. She could be out-of-place here in this movie about numbers and bullets. But she serves as a contrast to Wolff’s dry attitude and still plays to her strengths though she’s used as the fish-out-of-water.

J.K. Simmons plays Raymond King, one of the heads at an intelligent agency who seeks to know the facts about Wolff. Simmons is solid throughout this movie, but within it he gets a moments which he genuinely moved me, a scene alone which sums up everything about this character in one moment and could earn him an Oscar on that alone.

We also get our villain, played by Jon Bernthal, some kind of hired gun that is wiping out all the witnesses. He is the opposite of Wolff, very expressive and an energetic talker. So you know the two will meat eventually and because they each have their moments it’s a confrontation your actually anticipating it with excitement.

This movie, or these kinds of movies, for example Taken, The Equalizer and The Gunman I have always found very boring. They are the case of some character that is actually very poorly defined and can mow down roomful after roomful of opponents with little hesitation and the same stern expression. Furthermore all those previous movie I just mentioned have middle aged leads so it just seems like we have to sit through these actors working through they’re midlife-crisis. But this movie comes with so much more. Firstly we get into his past so we know why he’s like he is and how he got to be the best at his work, he is most happy when he solves number problems, wear a pocket protector. This isn’t interested in typical portrayals of a macho-man.

Typically with these types of movies there’s a big action scene at the end and what this usually means is that the movie has run out of story, but this one, even though it does indeed have and action scene in the last act, there is still plot. So many movies last an hour and thirty minutes and only have an hour worth of things to say then give up and resort to gunfire, this movie is two hours long and has a whole movies worth of plot. Such a shame that I have to emphasise how good that is.

There are a whole bunch of movies that are similar to these movie as it could have rather easily been anther one to fall by the wayside. But it has a story that requires the run-time to tell it, engaging performances, a character that has a back-story. The fact that it’s a good movie is enough but knowing that it could have been so stupid makes it a marvel.