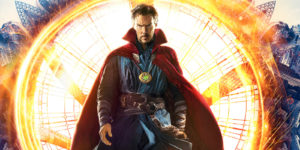 Doctor Strange is a movie that must stand out. It has Strange as in it’s title and the name of its main character. So there needs to be something about it that is unlike the other MARVEL movies, hell at this point, where we may be near the saturation point it needs to distinguish itself from all the other Superhero movies we now have.

What MARVEL now puts before us is a gamble. Just as big or maybe more so than what they did with Guardians of the Galaxy. The straightforward way of telling the superhero has almost run dry, so now they need to give us something new. Can they deliver a movie that captures the psychedelic imagery and mind-bending rules of this character and still make it accessible to audiences?

Our hero is the aforementioned mentioned Doctor Stephen Strange a shrewd, arrogant surgeon able to perform the most complicated operations with ease, he also comes with an encyclopedic knowledge of music. One day wile racing to a soiree in his sports car, believing he can do that and talk on his phone, crashes but survives, except his precious hands have been crushed. He can no longer perform surgeries, he could be a consultant but he cannot accept this and spends his fortune seeking out different treatments, to no avail. His quest eventually takes him to Kathmandu where he finds a new lease on life not in science but through magic.

Benedict Cumberbatch soured to a lot of peoples favourite actors list when he debut as the star of Sherlock. Since then he has amassed a very wide range of roles under his belt. This role requires him to capture the transformation of an arrogant, ego inflated, controlling man and have him broken and rebuild himself in a whole new way. He also sounds like Hugh Laurie in House (though that may just be me).

For his supporting characters we have Rachel McAdams as Christine Palmer, the part of Stephens ordinary life and his grounding force for humility and kindness. When the training begins we are given The Ancient One played by Tilda Swinton, the mentor character, Swinton is an entity like no other, you really do buy her as a character out of this world or at least not of the norm, able to take the most obscene mystical mumbo-jumbo dialog and roll it off the tongue. Chiwetel Ejiofor plays Mordo, another but more experienced sorcerer. Ejiofor is an amazing talent and he does indeed have moments to shine in this movie but he really deserves a part where he’s given a fully fleshed-out character that will bring out his amazing talent. Benedict Wong plays… Wong (no really) another sorcerer, head librarian and the classic non-smiling straight-man.

In terms of the layout of the plot this is still what you will have come to expect from most Superhero movies, especially from MARVEL. But what keeps them fresh and able to continue their winning streak is that they perfect the formula, adding the necessary alterations when needed and still giving us something unique. Doctor Strange has been a character that has flourished in its visuals, this movie shows us colours and transitions like we’ve never seen before, there is a scene where Stephen literally has an outer body experience and we get so many visuals that they may have used them all up, but they continue to give us them. This movie is a the psychedelic one of the MARVEL movies. If you enjoy that, then you will find yourself at home in the other worlds this movie takes you to.

Like any fictional world there needs to be rules to establish the way things work and so the audience can understand it. The sorcerers cast spells by abandoning the previously established limitations of time and space, they need to unlock their minds so the normal rules will bend to them. However some acts put too much of a strain on them so they use tools, which allows them to focus their abilities and easily conjure the spells they need to.

Dr Strange doesn’t, and never really has existed in the same realm as The Avengers. His place is a smaller, more neish corner of this universe. He exists within dreams and nightmares, the worlds unseen, but just as important.

The visual inspiration for the movie is very clear. With having a cityscape fold they have obviously taken inspiration from Inception, however that images was taken from a Man With a Movie Camera. But also when we go inside a building it resembles the morphing effect in Dark City.

But what does this matter? Truth is it doesn’t because they use it for their means and make it more complex and intense. But there is also the running theme of the breaking glass, like his hands, his should and his perception of reality, this movie is about the breaking of the this layers we have in life.

In this movie is a chase scene like nothing else I’ve seen in movies (and I’ve seen a lot). It seems straightforward with two people working together to try and get to a portal and they have pursuers. But the pursuers and shift the landscape. They change the angel of the whole city, then bend the buildings and warp the architecture. Eventually the whole things taken on the a shifting rubix cube seen through a kaleidoscope.

Going way back to his first run in the comics Doctor Strange was a character that wasn’t the most powerful but he was smart, strategic and committed to defeating his enemies. Our climax in this movie is not one where two beings hit each-other with lights and sound until the other is knocked out, it is one where what has comes before playing into the end strategy. This is where our hero out-thinks the threat instead of out punches him, a refreshing and important take on to show to the masses in Superheroes.

This movie shows what MARVEL still has. Even with nearly twenty movies under their belt at this point and so many characters used they still have things to show us and different angles and views to take in this genre.