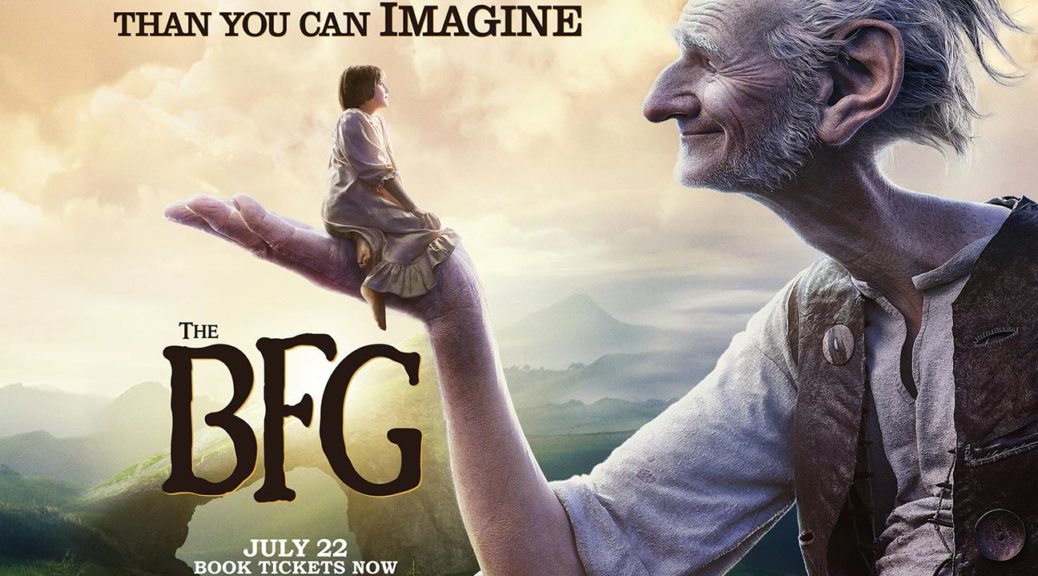 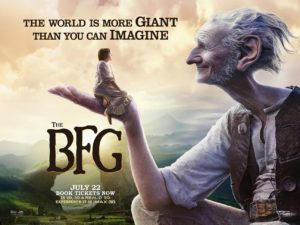 Roahl Dahl was a true writer of children’s fiction. He created stories of the truly fantastical that stirred the imagination of all who read them. Also he shaped simple but deep plots that could be understood but the simple thinking of children but also complex in a way that you will keep coming back to them years later. The BFG is a story about bravery and the importance of dreams.

Put simply we meet Sophie, a little orphan that is more responsible that the head carer in her orphanage. She knows that there is something that moves the London streets at night, one night she sees it for herself. A large, twenty-four-foot figure in a black robe. The figure sees her too and takes her. She is whisked off to another world and learns that she is in Giant Country. The one that has taken her is a giant but has no intention of eating her.

He will not take her back for fear she will tell people. So Sophie is in Giant Country indefinitely. And must do her best to navigate throughout this world of giant oily vegetables and host that is so large his bed is an entire ship.

The best part of the movie is the giant himself. Mark Rylance moves and is able to deliver the giants fragmented form of English with utter conviction and ease. An actor that was uncomfortable with the material would overcompensate by being too hammy, Rylance is able to speak the unique dialog with warmth, humor and even regret at times. His design is also a technical triumph. Like with Tintin the effects team are able to take the original illustrated character design and add all kinds of skin texturing and wrinkles lines to create a balance that forgoes the Uncanny Valley and more of a detailed illustration come to life.

The other best thing is Ruby Barnhill as Sophie. Speilberg has a talent for working with children, somehow he is able to communicate with them and get them to understand that material and get very solid performances out of his young stars. But there does obviously need to be talent there and Barnhill has so much of it. She is able to interact with things that are not really there and able to pull-off scared, witty and awe convincingly.

The C.G.I. is something that’s beautifully realized. There are as much practical effects in the movie as can be, but most of it is C.G.I. and it looks like a lush, vibrant painting. The sunlight shines through the the hair and bounces off skin, dreams are matter that take different shapes depending on their nature.

What else can be said about Steven Spielberg? He is one of the most acclaimed names in all of movie history. He knows the formula of how to compose a satisfying movie. Knowing how to expertly compose and light shots but also also with the story for having moments of levity, but also dark ones to balance everything out. With this new technology he is able to have swooping, intricate shots that would be impossible in live-action. As-well as that show things that would be impossible, Jumping into a reflection, having the camera follow them and then flipping one-hundred-eighty degrees when they come out the other side, for example. Though there are a few moments that seem like he just wanted t make sure the kids would laugh.

As must always come with a Spielberg movie is the music of John Williams. Williams who has so many of the greatest movie scores under his belt doesn’t need another one. But yet he does anyway. His score here heightens the mood and feel of whatever situation it plays for and ranges from scary and intimidating, bouncing and magical, and quiet and lonely.

This movie is something that children should experience. They should know that dreams and courage are important, that there are threats in this world but they can be overcome. And see images that will enrich their imagination for years to come.

2 thoughts on “Review The BFG by Jonathan Evans”