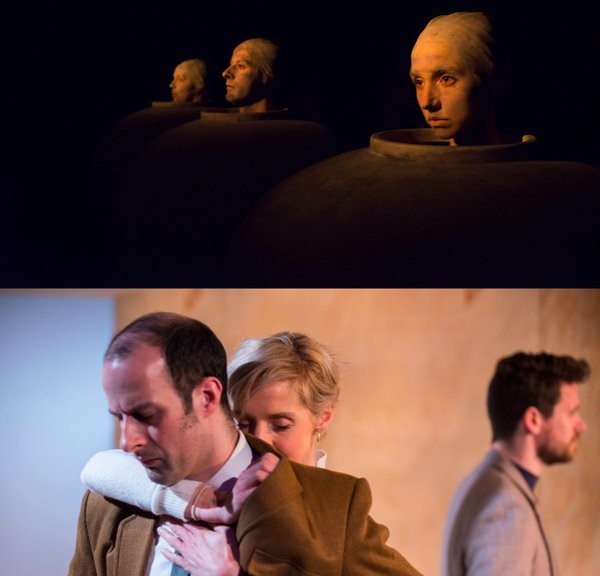 The Other Room Theatre kick of 2016 with their new season ‘Insomnia,’ bringing us a double bill of both Beckett and Pinter’s work. These 20th century playwrights are considered to be two of the most influential dramatists of all time.

The plays ‘Play’ by Beckett and ‘Silence’ by Pinter, both draw on themes around betrayal and lust. Both Kate Wasserberg, (director of ‘Play’ and Artistic Director of the Other Room) and Titas Halder, (director of ‘Silence’) made sure these plays were not only performed with great distinction but also showed great technical accomplishment.

Stepping into the first performance of the Other Room theatre there was soundscape in the background (composed and sound designed by Dyfan Jones) creating the mood that was hardly noticed at first but grew louder and louder until everyone was completely engaged and then it just cut out. A deathly silence where the audience was left in the pitch black, all senses removed, waiting in suspense. This was the first moment that completely drew me in to the performance, this moment never left me until I was ushered out of my seat. I was in complete awe at what I had just seen.

Floating heads on stage, muttering things one couldn’t comprehend, the imagery in this was beautiful. Then controlled by a single spotlight it shone onto the character speaking at the time with everything else surrounded in blackness. This technically was beautiful as we were transfixed on what was being shown. It felt like you were at a tennis match where you kept moving your head to the next performance not wanting to blink in case you missed the next moment.

The performers were incredible, their focused stare and fast paced speaking with hardly pausing was a treat to see. It was evident that they had complete dedication to this performance as their pronunciation was spot on even though the pace was remarkably difficult. The trio of performers even though they were speaking in quite a monotonous way showed great characterisation and we could fully get a sense of each personality.

After only knowing Matthew Bulgo through his great work as a playwright on ‘Last Christmas’ for Dirty Protest, his acting ability corresponded to the success of his play. Acting alongside him was Victoria John who showed comedy within this play and who’s laugh has to be up there with the greatest of evil laughs. Then Peta Cornish who captivated us with the use of her eyes and her elegant speaking voice.

This was a performance that frazzled my mind yet I would want to see it again and again just to get another glimpse into those lives.

The second performance, Pinter’s ‘Silence’ was technically less demanding but nonetheless just as beautiful, the simplistic set worked really well and it felt like the actors were in another dimension. What I noticed most of all was their use of spatial awareness, when one person moved to a different spot, the others would change their position so it always looked aesthetically pleasing to the eye. This was well thought through and blocked. The performers acting was equally accomplished with Matthew Bulgo playing Rumsey, showing us a more desperate side than the comical side we saw earlier, Peta Cornish playing Ellen uses her eyes as an emotive tool which was something I haven’t seen in a long time in a performance, truly remarkable. Then, Neal McWilliams playing Bates. Neal played a character who had a boyish charm that really put extra depth into this performance and made it stand out so much more. Each performer showed us what it felt like to be in desperation of love and hope, to have such strong feelings and the want to connect with one another.

This double bill was a great way to step out from the outer world into something much deeper. This is a performance that makes you feel something you definitely didn’t feel before entering the room. As an actor myself these plays are something every actor dreams to play, the way they are technically demanding for the voice and how you have to be completely disciplined with your whole body making sure you know every tiny movement you make will have great impact on the performance. I thoroughly enjoyed the night and cant wait to watch the Other Rooms next performance of ‘Sand’ by Nick Gill.