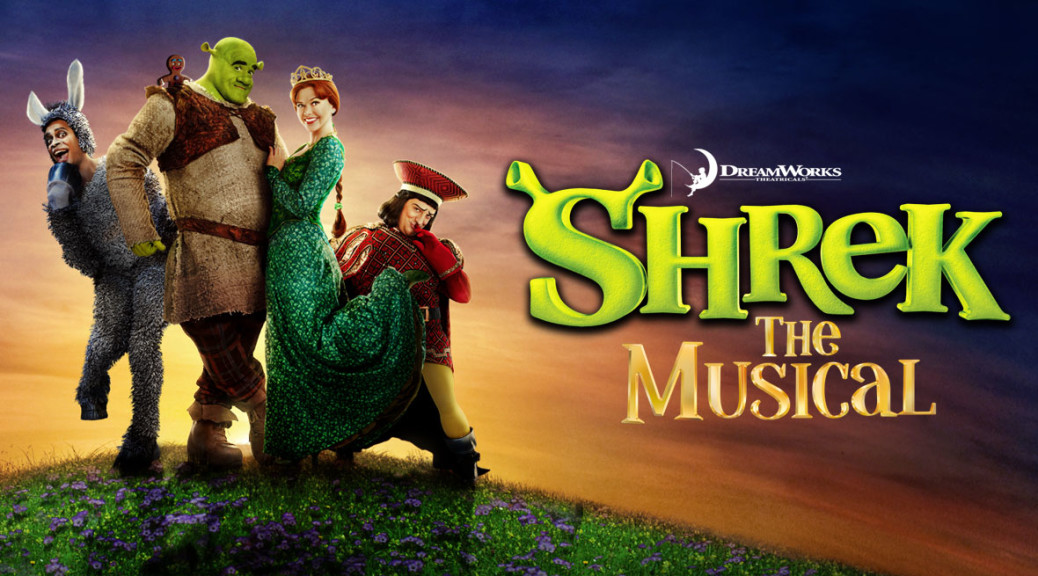 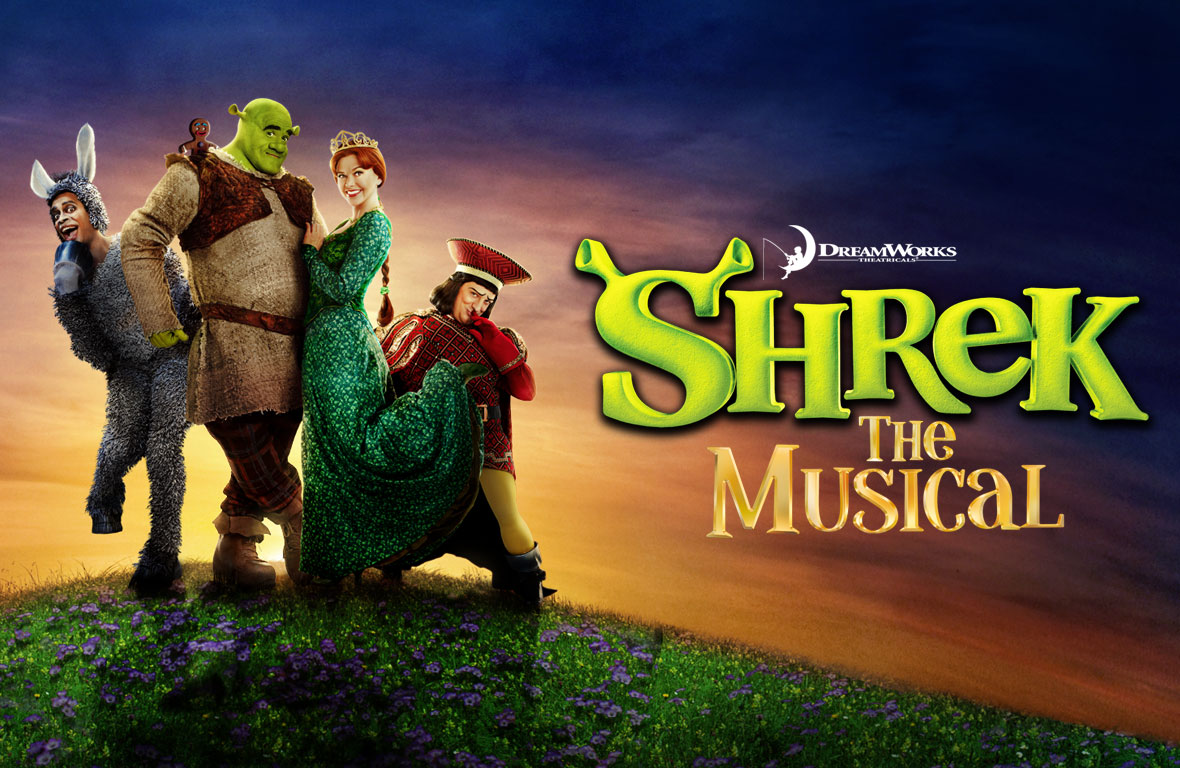 You know something special must be in town when the outside and interior of the Wales Millennium Centre is lit up luminous green. I must admit I was a little apprehensive that I would not enjoy the show and it would be something more suitable for younger children opposed to teenagers but I could not have been more wrong!

The show began with a voice over giving the usual warning to the audience regarding mobile phones but this warning certainly came with an unusual outcome!  The penalty being an ogre breaking wind in your face. It was from this you were able to get a pretty good feel of what you were in for with this musical.

Shrek The Musical is based on the Dreamworks animated film, and takes the audience on a magical and fun adventure with Shrek and his trusty companion Donkey who set off on a quest to rescue Princess Fiona. Their intention is to take her to the evil Lord Farquaad who intends to marry her so he can claim his rightful place on the throne.

The stage production very cleverly captures everything that was loved about the film. Ranging from the fairy-tale characters, like the gingerbread man who cringes at the thought of losing any of his gumdrop buttons to Peter Pan who is described in the show as being ‘a 30 year old who is in need of a shave’.

It was obvious that Gerard Carey stole the show as the strangely short Lord Farquaad, who had the audience laughing all night as he scuttled around the stage and repeatedly spread his legs, not to mention his entrance song ‘What’s Up, Duloc’ when he was sitting on top of his castle crossing his small legs.

It would be wrong, of course, not to mention the equally brilliant Shrek and Fiona. Shrek is played by Dean Chisnall who brings the well-loved character to life and his voice is so distinctive as that in the film. Fiona is played by the brilliant Bronte Barbe who shot to fame when she competed in the critically exclaimed Andrew Lloyd Webber search for the next Dorothy in ‘Over The Rainbow’. The complimentary pairing of these two characters reaches a whole new level when they sing the song ‘I think I got you beat’, the song is a sing off between them where they battle to prove who has had the worst upbringing before taking it to a whole new level with a competition of who is best at burping and passing wind. It also oddly becomes clear they are made for each other and should be together.

Another magical pairing in the show is Donkey and the Dragon. The Donkey is played by Idriss Kargbo who did a wonderful job and brought the playfulness and energy that Eddie Murphy brought in the film. Eddie Murphy is an extremely hard act to follow but Idriss Kargbo does it wonderfully. One of the big differences between film and stage is the lack of animation available and so for the show the Dragon was brought to life in the form of a gigantic puppet controlled by four puppeteers. The voice of the Dragon was provided by Candace Furbert who brought an amazing Gospel and Motown feel to the Dragon. The blend between actress off stage and the Dragon onstage was seamless making the audience feel the Dragon was alive and with them in the theatre. 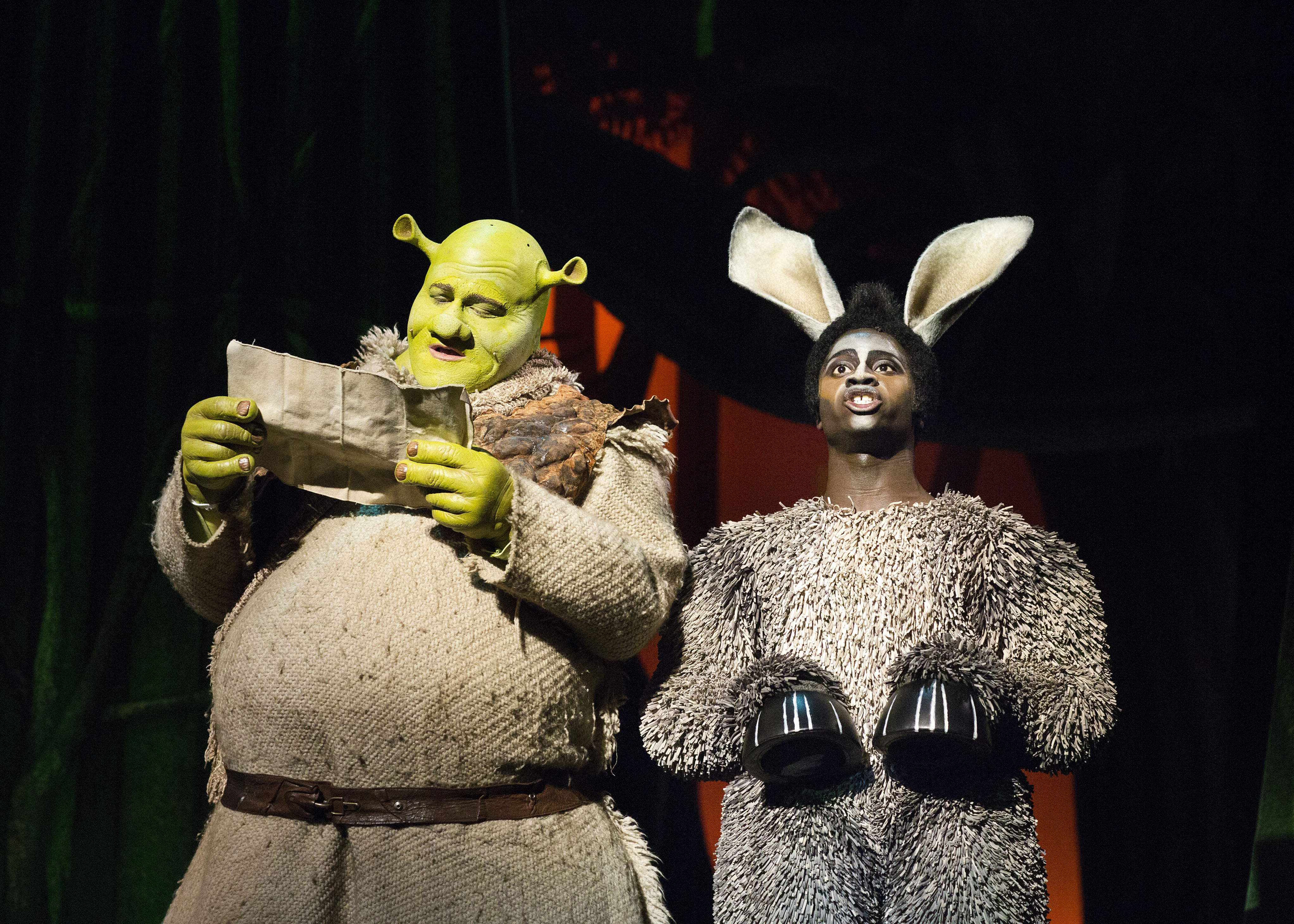 The show is wonderfully written and performed and crammed packed full of great jokes and innuendo that passes right over the heads of younger audience members. A must see Musical that is fun for all the family. Hurry up down to the Wales Millennium Centre because I guarantee you will be left shouting at the end “I am a believer!”.