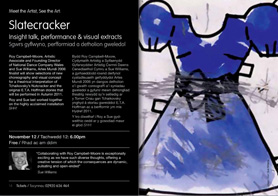 All good contemporary art is open to interpretation. Roy Campbell-Moore and Sue Williams’s collaboration, Cracked is no exception, posing a number of questions about the manifestation of sexuality and the relationship between man and woman.

Set to Tchaikovsky’s score from The Nutcracker, Cracked is a rebellion of the ‘fairy tale’. Instead, it explores the realities of relationships. The emotions and sexual tensions that we experience when starting a relationship, and the constant struggle for control.

We meet SHE as she dresses for a night out – picking clothes that accentuate her femininity and sexuality, a private moment adding her make up (which would have been a little more engaging with a larger mirror that reflected the mood and movement of the ritual), and then a full length check in the glass; a short dance that tests her outfit for suitability and sensuality, the tutu harking back to tradition and suggesting that, somewhere beneath the made-up exterior, every woman wants to be the fairy princess.

HE presents himself to us ready dressed, “effortless” in preparation for his evening. He responds to his own music with aggression and assurance; he WILL have a good night, and he WILL take what he wants from it. Though, beneath this demeanour of certainty and arrogance, there is a sense that it’s all a show.

In their meeting, there is a hesitance as they sit apart, not acknowledging the existence of the other until her small gesture of openness, willingness spurs him on, and he is suddenly all over her, falling (drunkenly) at her feet – using the most unromantic gestures to win her over. Their flirting and foreplay is a mix of desire and repulsion, though his main focus is the desire to have her, whether it is her will or not. The moment she feels sure of herself – confident enough to open herself up and give him a sense of her sexual self, he falls upon her, re-exurting his power and physical strength over hers.

A solo performance from SHE is re-empowering; she both embraces and rejects the traditional image of ‘woman’, and conveys her independence and the joy she feels in that.

The final scene between them is complex in theme if simple in design; a rope attached to the ceiling is incorporated into the dance. They each take turns manipulating the rope, though HE seems to hold it more often than SHE and is quickly frustrated and uncomfortable when it is wrapped around him, symbolising the male’s need to be in control, so that he can walk away at any time which, of course, he does, just when they have made a close and intimate connection.

Her final moment, alone is ambiguous. Is she happier this way, or is she devastated to have lost him? What’s wonderful aboutCracked is that the answer is different for everyone.

The use of the traditional, classical music that ordinarily evokes images of flowing white tutus and charming toy soldiers juxtaposes the harsher reality that is portrayed in Cracked, increasing the level of poignancy of each movement, each moment between the two dancers. And that reality is that there is no Prince Charming and, if there is, you might well be better off without him…